How can I fix the overly-bright background in my landscape photo?

I am pretty much a complete newbie to post-processing, since I don't normally post-process my pictures: if I don't like a picture as it is, I consider it a bad picture and discard it. There is, however, this one picture which has a little thing that bothers me but which I would like to fix if possible because I otherwise really like it. 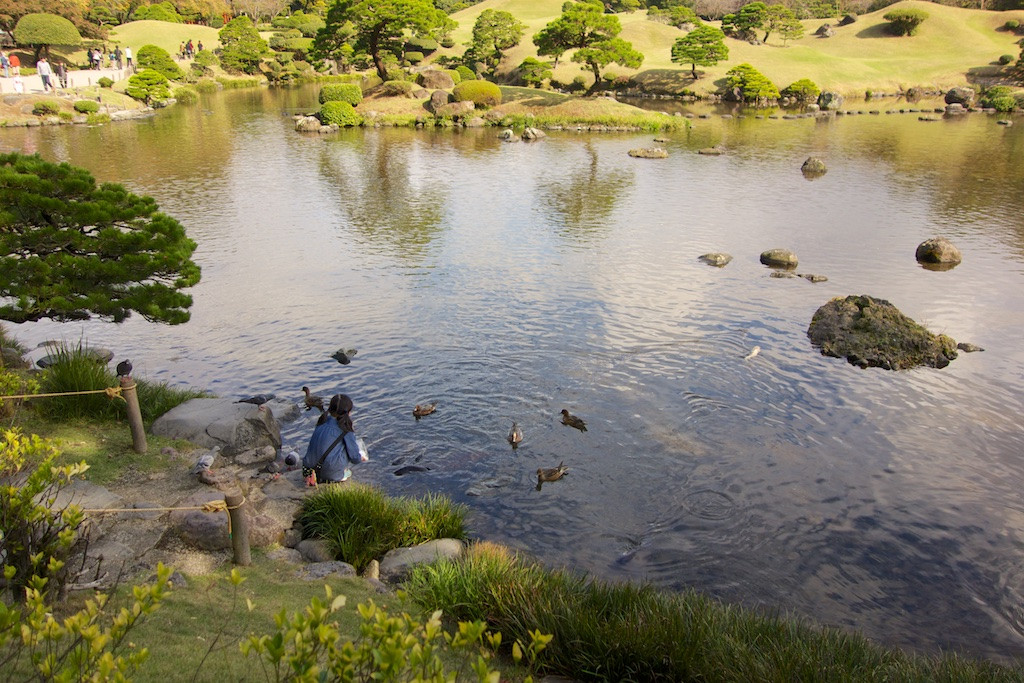 I find the garden in the background too bright and distracting (especially the trail in the top-left corner) and would like to tone it down. I figure I would need to do some kind of masking, but how do I obtain the right mask?

I am currently using Aperture mostly, and I also have GIMP around, but I would be willing to use something else.

This is pretty easily done with a layer with a simple linear gradient, from black to transparent. Alone, that looks like: 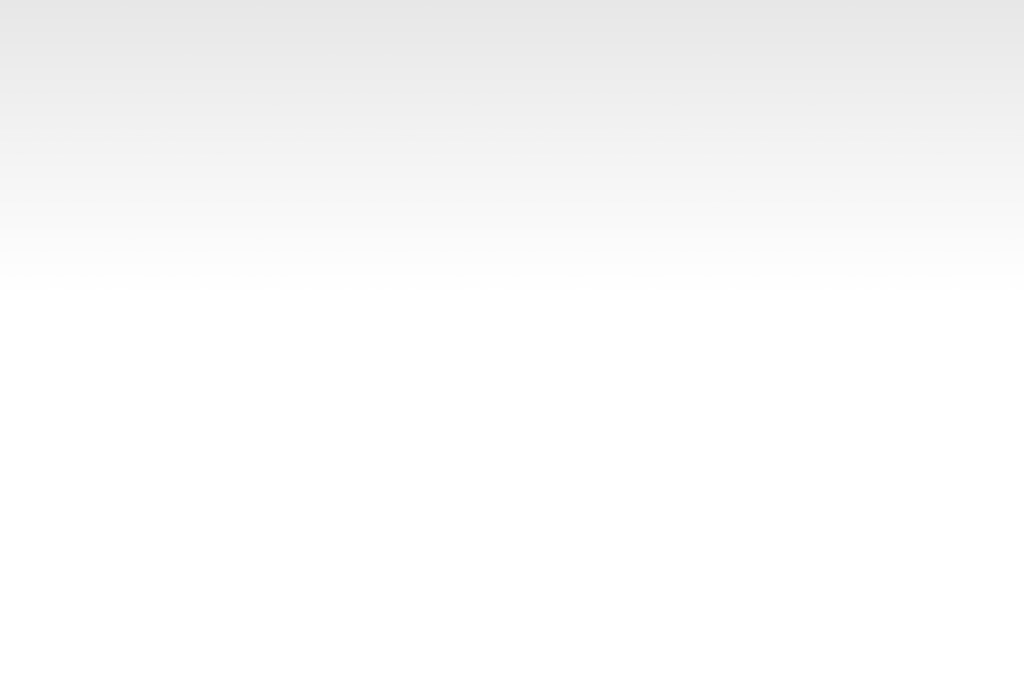 (In the above, the background is rendered as white, but in the actual layer it's transparent). Change the opacity up and down to taste — as you can see from the top of the image there not being black, I've put it down to about 15%. Combined with your original, that gives us: 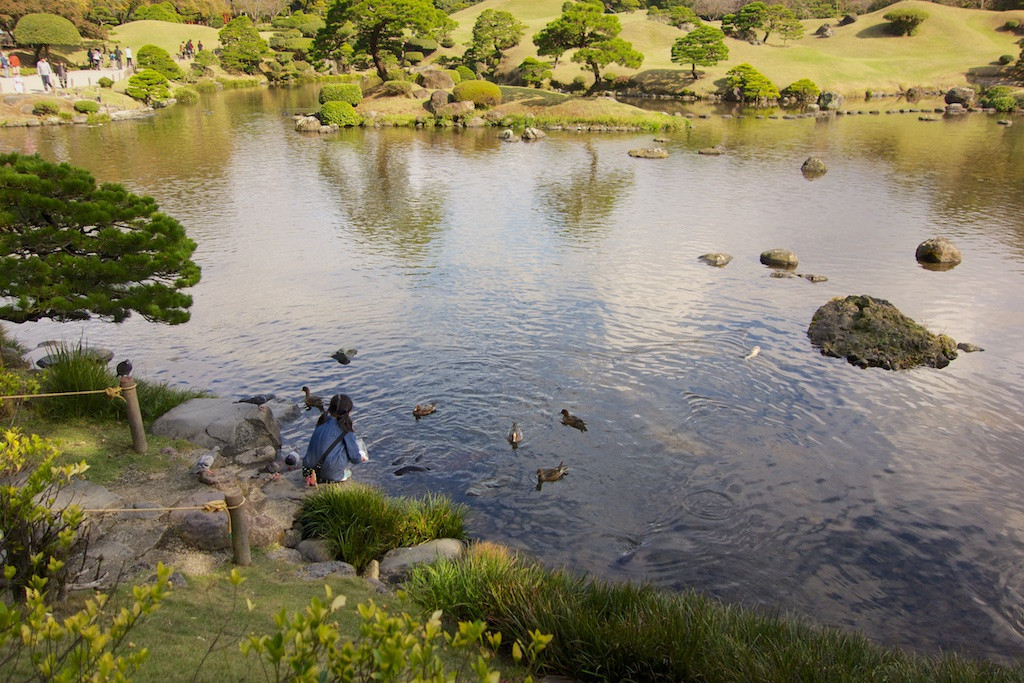 and then, since that makes the overall image dark, a simple curves adjustment to bring up the midtones overall: 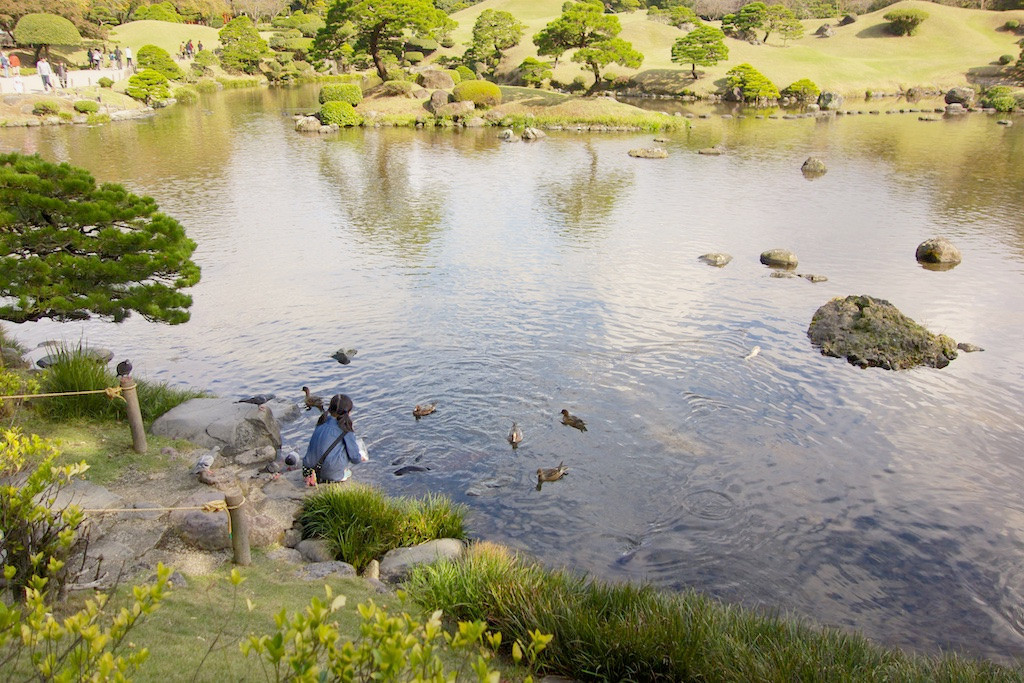 You can, of course, adjust the strength of either of these to taste. In this version, the brightness is generally even overall, but you could instead go more dramatic: 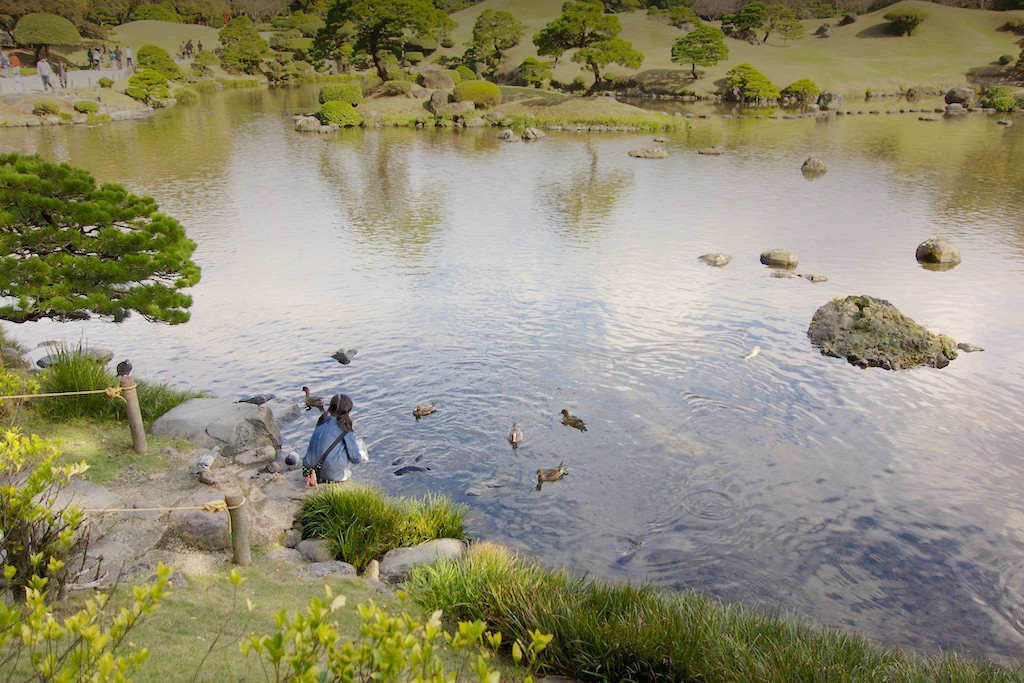 This is a pretty simplistic technique, and one thing to watch out for is for dark shades going to flat gray when they shouldn't — here, particularly apparent in the people on the walkway.

An alternate approach is start with bringing up the dark foreground. I used this Shadows & Highlights Gimp plugin, but you could use the (better, I have to say) Photoshop tool equivalently. I used a layer mask with a gradient (basically the inverse of the above) to apply the correction only to the lower half of the image. (Were I spending a little more time on this, I'd also mask out the middle-left tree and treat it separately.) 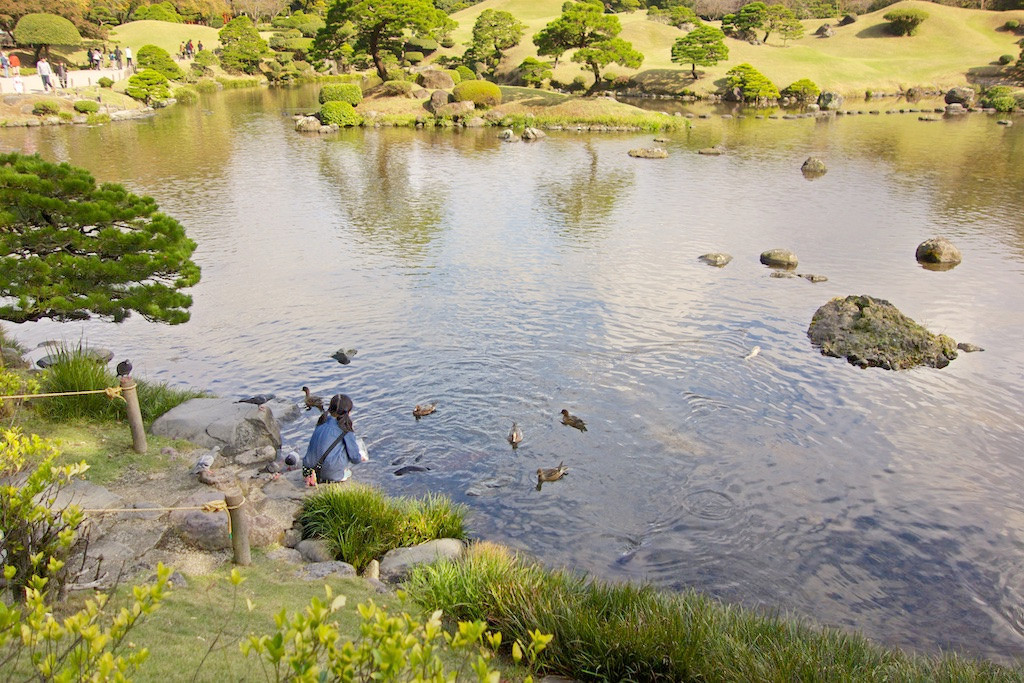 Then, I used the first gradient technique to darken the top, here choosing "soft light" as the blend mode for variety: 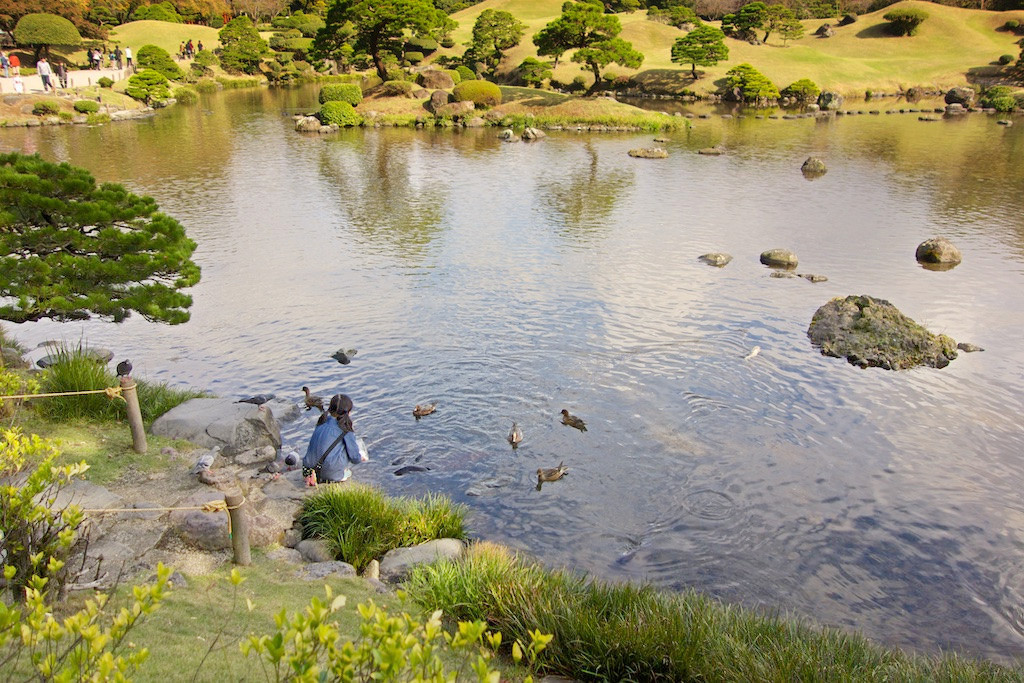 Again, there a lot of knobs and dials in this process where you can change things to meet the vision you want.

I really like the trees and shadows on the far shore — without them, the image is "girl by edge of indeterminate body of water", while with them, it is "pastoral landscape with girl by pond". My initial wish is that there weren't so many people walking around in the top left (and might go so far as to paint them out, which wouldn't actually be that hard), but on reflection, they are really part of the overall story of the park.

For what it's worth, for that reason, I most like the version one above, with the foreground brightened and the background also left bright. It's true that the walkway attracts attention, but that's not necessarily bad in the overall context — my eye jumps there, and then wanders down the diagonal to the girl, then up to the far shore, and then back to figure out what's going on with the ducks... taking in the whole image piece by piece rather than just immediately dismissing the whole thing as a straightforward snapshot.

In fact, with that in mind, I'd almost wish for more of empty space to the foreground bottom left, showing more of the path, to give a juxtaposition of the kid's quiet, empty corner vs. that busy area across the pond. That's a nice, successful "story" photograph. At least, that's what my mind is filling in — maybe the quiet corner is a busy parking lot in reality. :)

Aperture and other programs have a Shadows and Highlights tool that can be used to bring more of the picture into balance exposure-wise. Bringing up the shadows will make the area where the girl is sitting a bit less dark and prevent the brighter areas from drawing the eye. You'll probably have more luck with this if the original image is raw, since there's more information in them to work with than there would be in a JPEG.

You could try to mask the area in the background and adjust it, but the amount of it that's reflected in the pond might be a problem. Masking the darker part of the pond and bringing up the shadows in that might be worth trying, but that could destroy some of the contrast in that part of the picture.

The walkway is going to be a problem because it's so much brighter than everything else, and the best thing might be to crop it out. One way to do that would be to keep what's to the right of it: 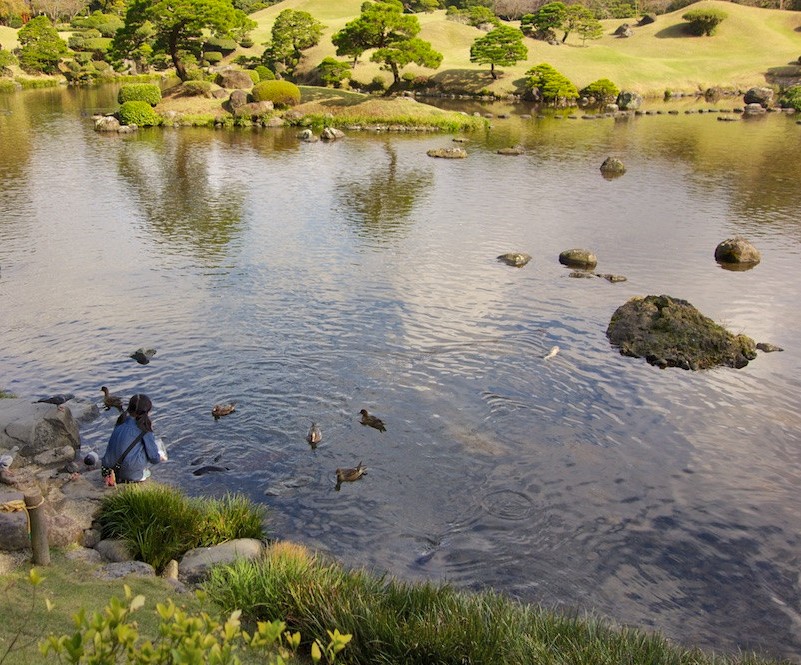 That crop removes some of the more interesting elements in the lower part of the picture, namely the tree, posts and ropes. I liked how the ropes and path lead your eye to the girl at the edge of the water, so keeping what's below the walkway works, too: 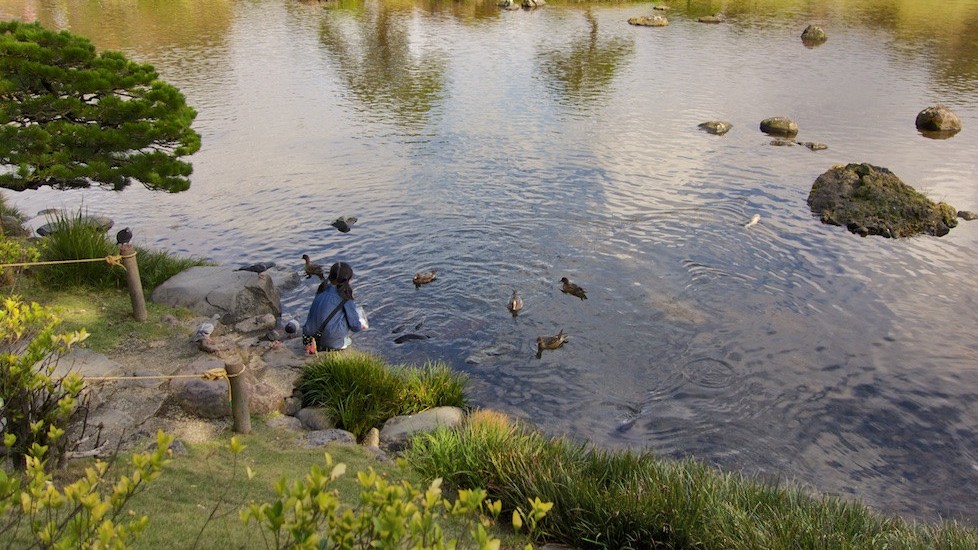 BTW, there's just as much art in processing your pictures as there is taking them, so don't discard otherwise-good pictures with minor imperfections.

I am unfamiliar with Aperture, but you could use any program that emulates a graduated filter, e.g. Adobe Lightroom.

Basically what this does is: applies a gradient on the photo in the direction and strength of your choosing, so you can darken the top and gradually decrease the strength of darkening when you arrive at the subject.

In Gimp or in Photoshop:

-use the Lasso tool. Yes, it's a bit more meticulous, but if it's just for one photo, it's not too much effort, and I think it's worth it. Select the area that you want and connect the points. It will take about 2-3 minutes.

-After you made the selection, go to Colors>Curves. If you've never worked with curves before, in this picture, just try dragging the 45 degree line down at various points, until you like the effect. See below for example. I made slight adjustments. 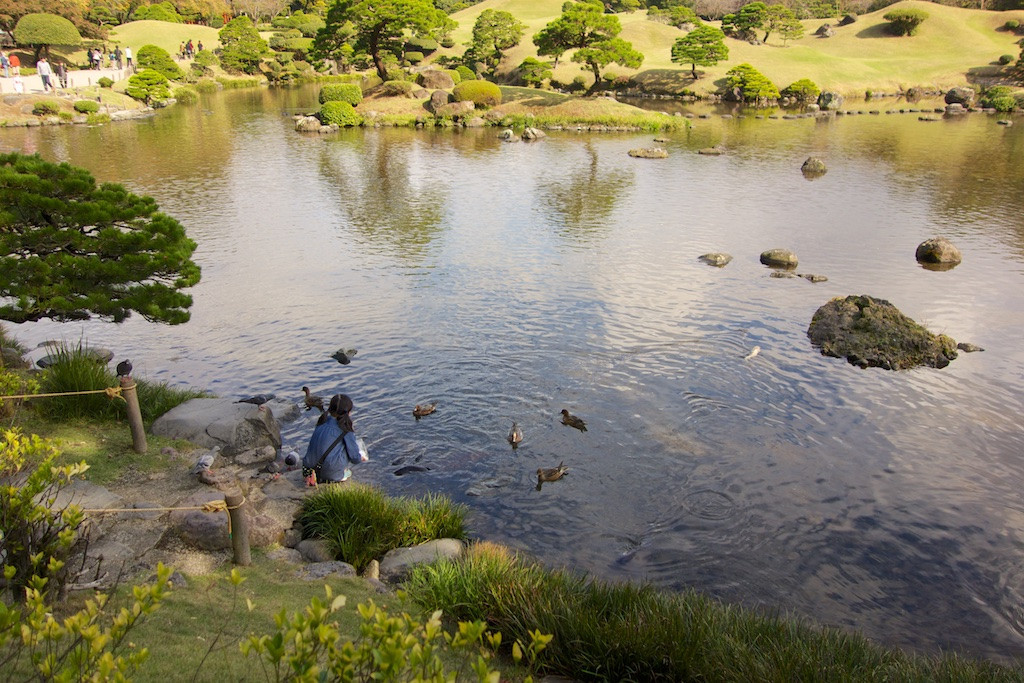 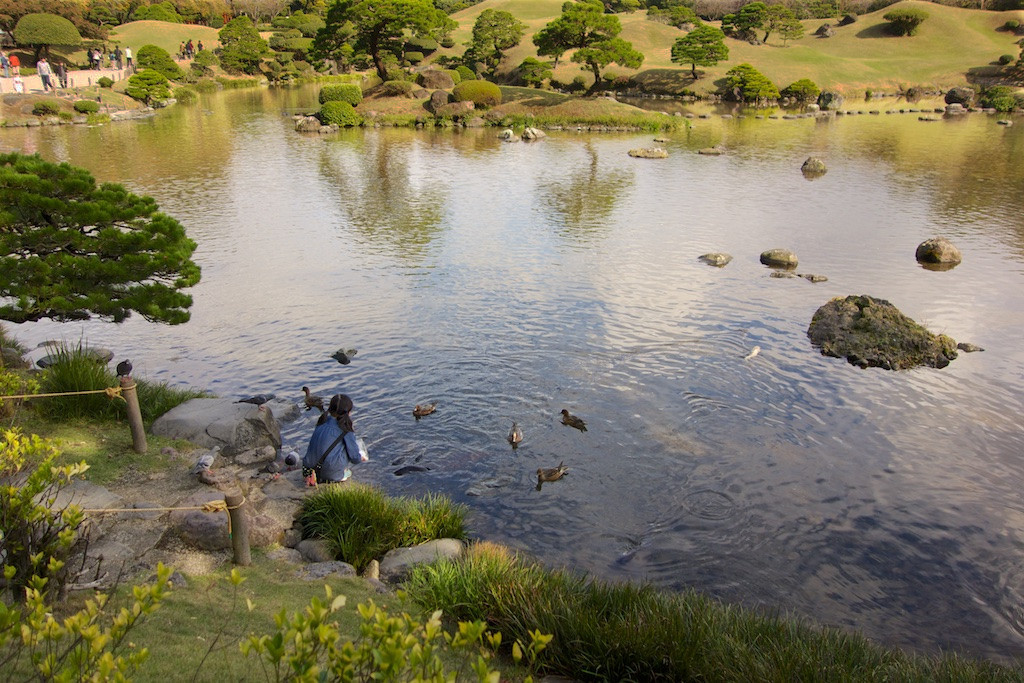 -Optional: in tool options in Gimp (Windows>Dockable Diologues>Tool options) select "Feather edges" and "Antialiasing". It may make the selection blend in better with the rest of the photo after you make changes.

-Optional: have Undo History open (Windows>Dockable Diologues>Undo history), which allows you to easily go back and make changes

Instead of applying a block grad filter in post processing, you could:

You obtain the mask by painting shades of gray with a brush until you get the look you want. Black is transparent. White is opaque.

Most image editors have similar tools available. I used GIMP.

9
How do you avoid a dim portrait with a bright background and no external flash?

1
How to fix the artifacts in the hair of the subject of this photo?
12
How can I fix an out-of-focus blurred photo in Photoshop?
5
What is the typical post processing work flow for amateur photographers?
6
How do I take a photo like this (very bright)?
1
Can HDR technique be used to take picture of a subject with bright background?
1
How can I improve a landscape photo with deep shadows in post-production?
5
How can I maintain brightness in a landscape without overexposing the sky?
5
How do I fix this washed out photo in Photoshop?