This question was in part motivated by this MathematicaSE question and Matteo Niccoli's geophysics blog post on color schemes. The underlying concept of Niccoli's perceptually-balanced color schemes was to create a color scheme that approximately enforces L*-linearity. For example, Niccoli presents the following illustration: 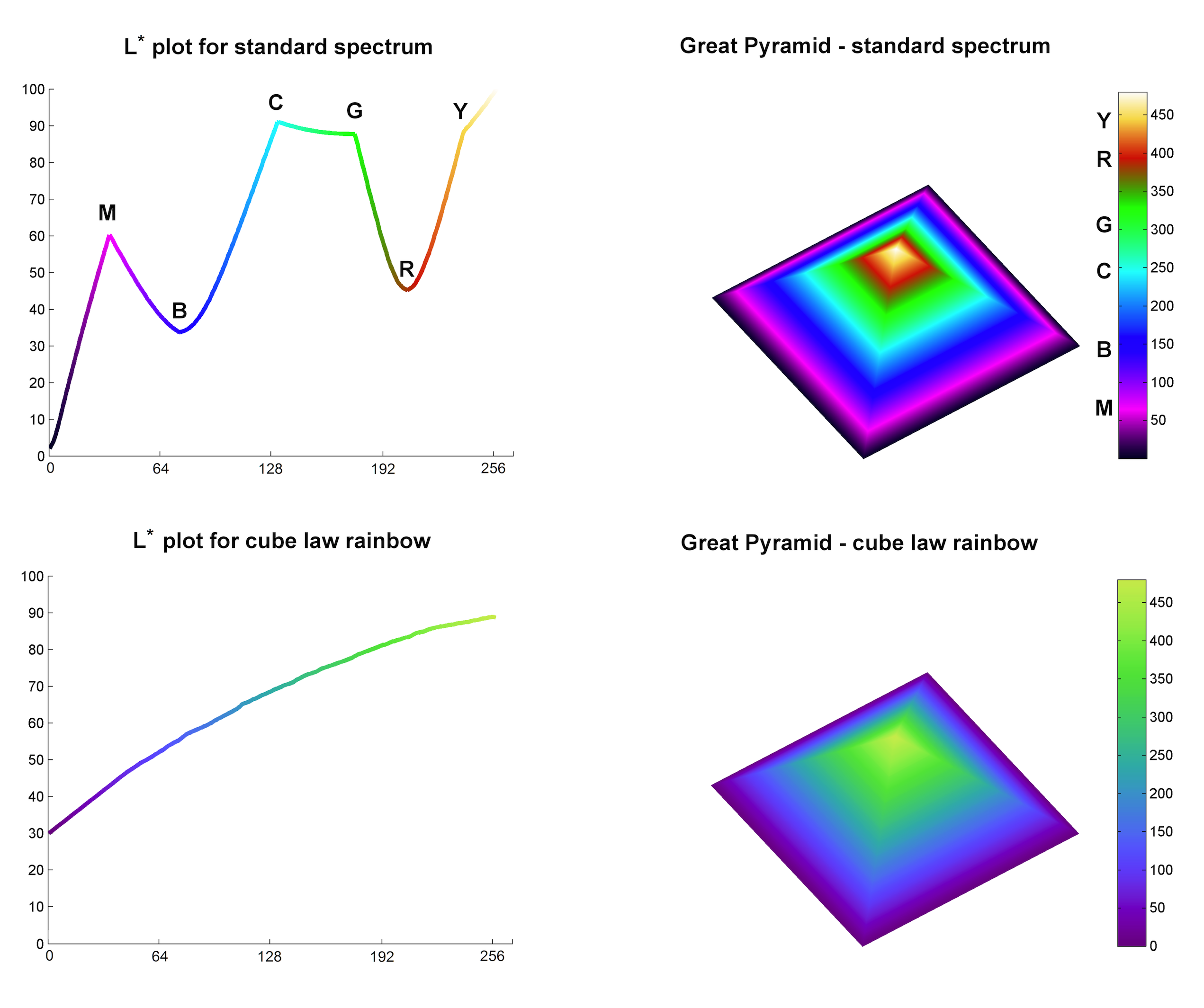 Throughout the 7-post series, Niccoli argues that perceptual intensity of a color is largely due to its L*-component, and thus if magnitude information is present, it should be encoded via L*; likewise, for phase or azimuth encoding, a constant-L* map should be used. Corroborating this, Bernice Rogowitz wrote

I've taken this advice to heart when creating color schemes, and have had both great and bad results with it. Since my question title indicates concern about the use of L*, I'll get straight to the bad. Consider the following map f from the interval [-2, 2] to RGB space: 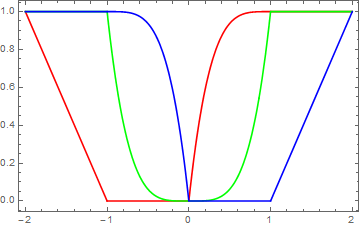 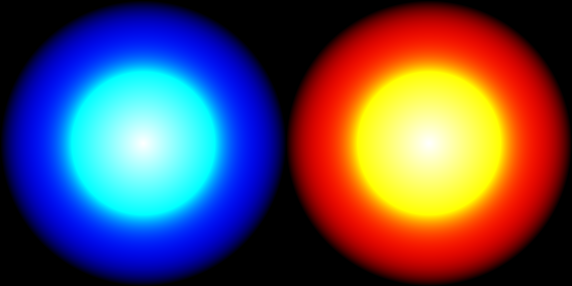 This function is radially linear, and thus the banded appearance is due to artifacts induced by the color scheme. To that end, here is a picture of the scheme's L*-profile: 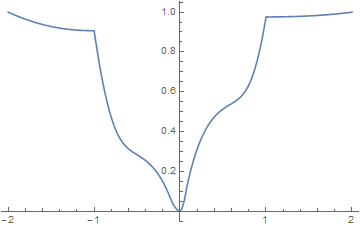 It's evident that there is a rough correspondence between bands in the pair of cones and regions of low-modulus L*-derivative. To that end, let's straighten things out!

With a bit of math, it's possible to determine a function g such that the composition fg has roughly constant L*-derivative. Here is a picture of the resulting L*-profile: 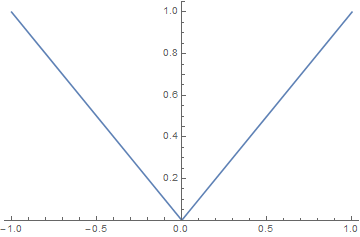 And here is the result of applying the resulting function to the same pair of radial cones: 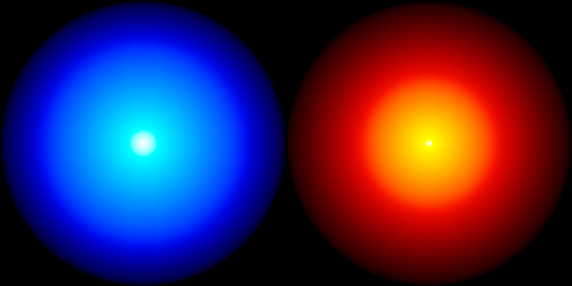 Now (at least on my monitor) while it is evident that while this is better at representing height data than the uncorrected scheme, it still has noticeable artifacts, including a sudden jump from red to yellow and a sudden pointlike transition from yellow to white in the right cone, and a semi-"flat" region after blue turns to light blue in the left cone, along with a white spot of larger radius than is seen in the right cone. So my question is:

My first guess was that L* alone can't be the complete picture (since many different colors have the same L* values). Instead, the RGB colorspace can be endowed with the CIE2000 metric (not sure if it satisfies the triangle inequality, but whatever LOL), and this induces a "perceptual velocity" for any path parametrized in colorspace.

Here is a plot of the perceptual velocity of the previous L*-corrected color scheme: 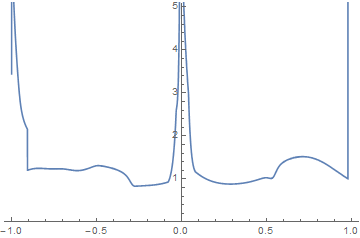 Notice the correspondence between sharp features in the previous cones picture and lumps of high CIE2000 perceptual velocity. From this, I concluded that perhaps CIE2000 velocity is another good measure of the quality of a color scheme, and applied the previous correction mathematics to get some color schemes with constant perceptual velocity; like with L*-correction, I've had both good results and bad results, but I think this question is long enough as is so I won't elaborate unless someone asks.

Just to reiterate: what is the proper metric on color space that one should aim to make uniform when constructing color schemes for data visualization purposes? Alternately, is there no single metric that covers everything? It seems like the whole topic of color is incredibly complex.

Now (at least on my monitor) while it is evident that while this is better at representing height data than the uncorrected scheme, it still has noticeable artifacts, including a sudden jump from red to yellow and a sudden pointlike transition from yellow to white in the left cone, and a semi-"flat" region after blue turns to light blue in the right cone, along with a white spot of larger radius than is seen in the left cone. So my question is:

I suspect that there are too many variables between the mathematical generation of the gradients and the moment the light of the monitor reaches the retina (and insufficiencies of the storage format) that impact the result, that the observations should be taken with a grain of salt.

I noticed that you are using sRGB color space for the sample image. sRGB happens to have unusual tone response curve that includes gamma 1 and gamma 2.4 segments. Perhaps testing a color space with straightforward gamma or L* TRC would yield better results? Also, sRGB has a small color gamut. Does your source gradient only contain colors that are reproducible in sRGB or did the program that generated the file had to remap some colors to sRGB gamut? That would certainly result in effects like those we see in the example.

The other thing is the actual monitor and it's profile. If I use an L* TRC display profile, the problem areas in the image shift. That tells me that the TRC may have some effect here. Perhaps it would be best to test this while using L* TRC based profiles from end to end?

Edit: Take a look at dispcalcGUI or ArgyllCMS for tools to generate profiles with custom TRC and to profile display with L* TRC

Not the answer you're looking for? Browse other questions tagged color-spaces human-vision-system or ask your own question.