So my iPhone 6 camera lens is as wide as my full frame 35mm DSLR lens?

I am trying to understand what is the deal with "full-frame" and what difference it makes, so did a silly test:

I sat at my bed and aligned the iPhone 6 camera with the door of the room and took a picture... then aligned my full frame camera with its prime 35mm lens and took the same shot, and compared the area that is covered in both pics. And actually, the iPhone 6 covered a little more.

So now I am confused. Can someone please explain what is happening? Does that mean the room is small, and for that distance the 35mm is acting more of a zoom lens that the iPhone? and if I go outside in an open area and do the test, I can see the difference?

You're right that the angle of view of the iPhone camera is a little bit wider than a 35mm lens on a full-frame film camera. Up until this point, you're not really confused. But the part after that, about the small room and zoom and distance — definitely confused. :)

"Zoom" means the ability to change the field of view — it isn't magnification. See What is the difference between a telephoto lens and a zoom lens? or How do zoom, magnification, and focal length relate? for more. Your 35mm prime lens (by definition, since it is a prime lens) does not zoom, so the angle of view does not change. Moving outdoors won't affect that. The iPhone also has a prime lens, but a smaller one, with a much shorter focal length — but, because the imaging area (the sensor) is also much smaller, the field of view captured is also much smaller — to the point where we call the lenses "equivalent" for the different sensor sizes. 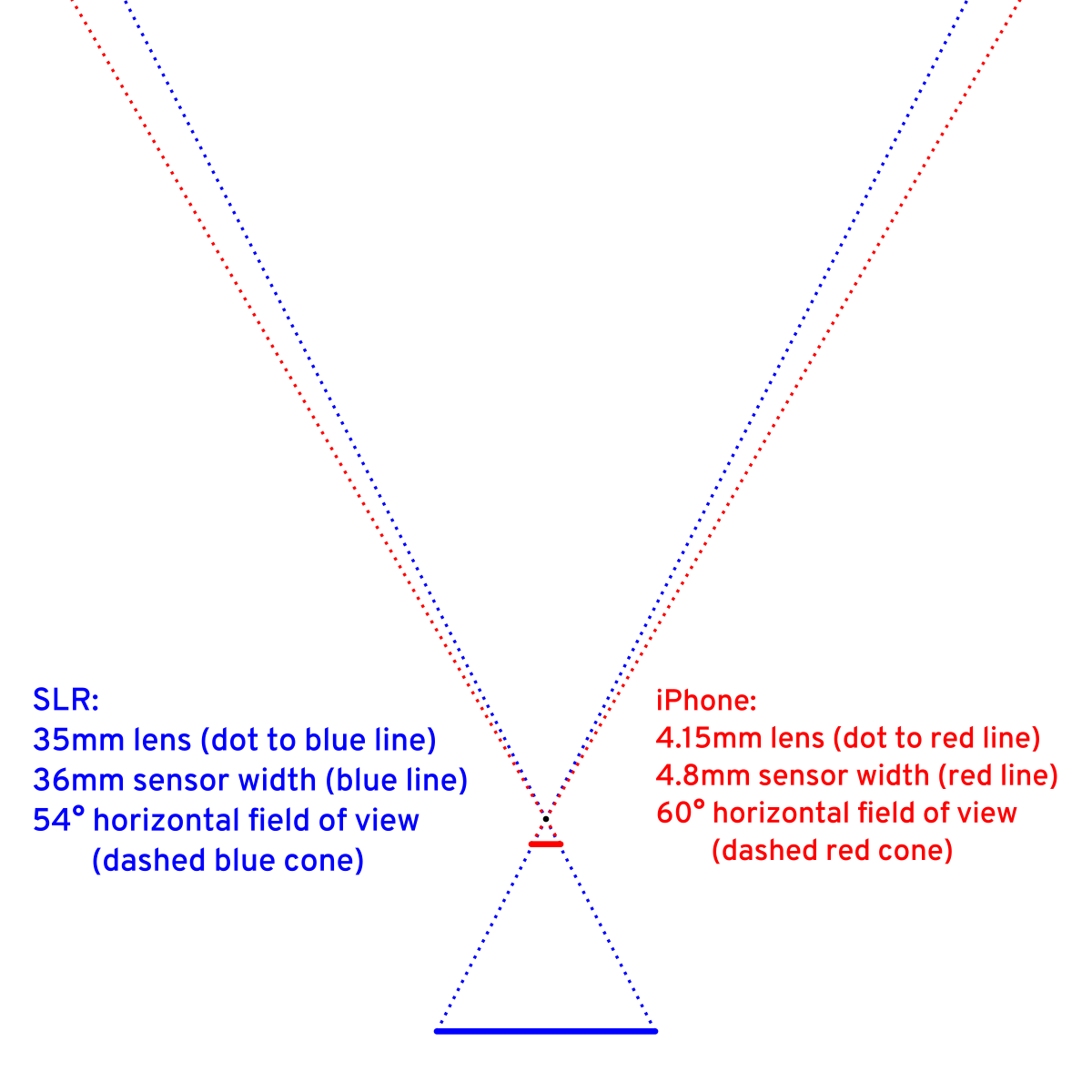 Based on the specs I found online the focal length should actually be a little different, but that's just details. The key thing you can see here is that even though the lens and sensor pairs are different sizes, they form (roughly) equivalent angles. That means it doesn't matter what you're pointing at — they'll roughly get the same field of view (with, as you observed, the iPhone showing just a little bit more).

Imagine moving the blue line up so that it's at the 4.15mm focal length, same as the red iPhone line. Redraw the blue dotted lines from the edges of that through the point, and you can see that if you somehow used that lens on your bigger sensor, it would result in a very wide angle. (There's an added complication in that the iPhone lens isn't designed to cover that whole full-frame area with its image circle, because it doesn't need to, and in fact it would be practically impossible to make a 4.15mm lens which did, but in the world of theory, that's an entirely separate issue. It's only the part of the image cone which is recorded which matters.)

Or, imagine moving the red line down, using a true 35mm lens with the iPhone sensor. This would result in a very narrow cone.

Practically, you can't make a useful 4mm full frame lens, but if you were to go to something like a 14mm or 17mm lens, you would see that the DSLR can see far FAR more.

The reason for this is cropping. The lens for both the iPhone and the DSLR both make an image the same size behind the lens for the same actual focal length, however the iPhone has a miniscule sensor that only covers a very, very small portion of the surface area of the DSLR sensor. With the iPhone, you are only looking at a fraction of the image that the DSLR would see on the same lens, so it appears to be a much longer(narrower) lens than it actually is.

Since the iPhone crams more pixels in to a smaller area, it still can take relatively high resolution images from that very small sensor, but this has other impacts on quality such as running in to issues with taking in less light per pixel, diffraction (which decreases sharpness) and having a very wide depth of field (which can be a good thing, but also makes it highly difficult to impossible to get nice background blur.) With its larger sensor, the DSLR can have bigger pixels that can take in more light, have shallower depths of field and has less issue with diffraction due to the larger pixels.

I am trying to understand what is the deal with "full-frame" and what difference it makes...

Part of the confusion seems to be that you read the phrase 35mm equivalent and assumed it meant the focal length of the lens. In fact, that phrase simply refers to the 35mm camera format that started with the film cameras upon which DSLRs are based.

The photographic film used in most film SLR cameras is called "35mm film" because it's 35mm wide. The frames recorded on that film are typically 24mm high and 36mm wide, so a "full frame" DSLR has a digital sensor that has those dimensions. Because the 35mm format is ubiquitous, it's common to talk about lenses for other formats in terms of the lenses for 35mm cameras that would give a similar field of view.

What's happening is that the sensor in your phone is (for the sake or argument) 1/10th the width/height of that in a full-frame camera. However, then lens in the phone is 10 times as 'wide' as that of the camera lens. The 2 cancel each other out and give you the same field of view.

So much misinformation. Where to start? I teach photography at UMD so i hope i can clear this up for you.

Your fullframe camera- thats just sensor size. Full-frame is the old 35mm film size. Its a tad larger than your aps-c sensors. It also means theres no conversion needed to talk about lenses in mm's. If we say 85mm, its 85mm.

Your iPhone camera needs to be converted into 35mm equivalent. Its about 33mm according to the internets.

So, your full-frame 35mm is roughly equivalent to your iphone 33mm. And yet... Youre right- 33 is slightly wider than 35. That's independent of the room or the setting.

Except i just put my 35mm lens on my Canon 6d and compared the image to my iphone 6s. The iphone was MUCH wider than the 33mm posted all over the internet. It looks more like 25mm to me.

Your "full frame" photo and your iPhone picture look nice and about the same on a tiny iPhone screen. Now start to enlarge a section - maybe a great and rare shot of grandma at a picnic looking good and you want to crop out all strangers and junk in the rest of the picture. The "full frame" will look great. The iPhone photo will quickly deteriorate in quality - that's just on your iPhone.

So, if you intend to just look at all your photos on a tiny iPhone screen and you know you will never need to crop any of them, and never need to enlarge them, you probably don't want to bother with a "full frame" camera.

At the end of the day, it all starts with the sensor. As a general rule, the bigger the sensor, the better the image. If you have a large, good sensor, you will have a good, crisp, well color-balanced photo at almost any size including a poster. A tiny sensor (on an iPhone) gives you an image you can do nothing with except look at it on an iPhone without seeing grain, softness of colors, soft edges, blurred features.

Not the answer you're looking for? Browse other questions tagged lens focal-length full-frame sensor-size field-of-view or ask your own question.

87
What is "angle of view" in photography?
34
What is the difference between a telephoto lens and a zoom lens?
33
What is the definition of a "prime lens"?
15
How do zoom, magnification, and focal length relate?
0
Why are lower focal length lenses wider?

1
What are the best fisheye lenses one can still buy that are full frame on 35mm film?
5
How does using a lens with some focal length on a full frame camera differ from using a lens with "equivalent" focal lens on a crop camera?
0
need recommendation for Canon full frame camera
0
What's the full frame equvialance of this phone lens?
0
Why does Sony say that a 35mm lens is "35mm equivalent when used with an APS-C camera?"
24
Why did they ever make smaller than full-frame sensors?
1
How do I select a fixed lens for my APS-C sensor camera for a specific field of view/zoom