Why do digital cameras not have an iso rating? [duplicate]

With conventional cameras your camera had a maximum shutter speed ( typically 1600 ), and the film you used had an ISO speed rating at which it was meant to be able to get a proper exposure under "normal" lighting conditions. Essentially this was a way of rating the sensitivity of the film. While you can push a given film to a higher than rated speed, unless you have lots of light, the quality of the picture is going to suffer due to being underexposed.

Why do digital cameras not seem to be given an ISO rating? It looks like the manufacturers are trying to misrepresent the maximum shutter speed as an ISO rating and make ludicrous claims with very high numbers for the sake of specsmanship, but trying to use those high speeds invariably results in terrible, underexposed pictures ( due to the very small dynamic range that has to be highly amplified to get anything at all ).

One manufacturer could have a terrible sensor but push the maximum shutter speed to 100,000, and you're not really going to be able to use anything more than 200 in lower light conditions, while another could only have a maximum shutter speed of 3200, but you can actually use it at 1600 in low light and not get underexposed pictures. How can you tell the difference?

Digital cameras do have an ISO rating. In fact most of them have many ISO sensitivities at which they can shoot. There are even third party sites that measure how accurate those sensitivity settings are in a lab.

Here, for example, are the results for selected versus actual ISO for three of the top cameras currently on the market. (Click "Measurements-->ISO Sensitivity) 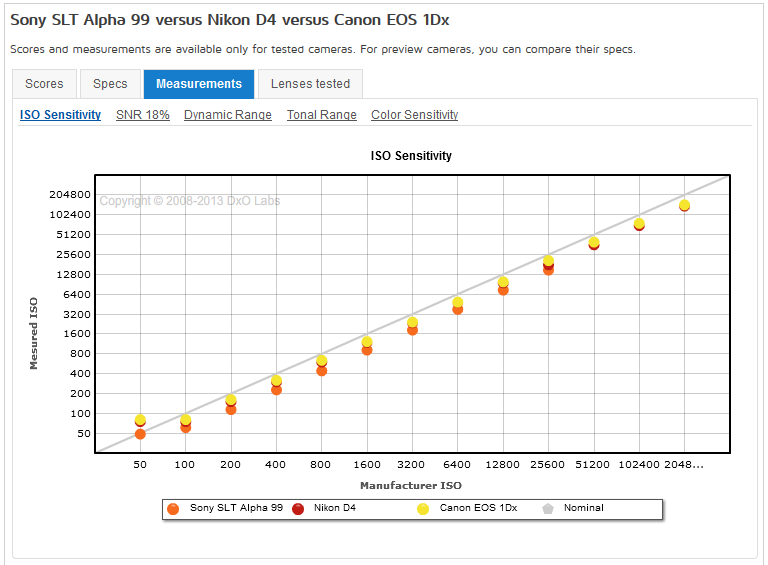 As you can see, the base sensitivity of the Canon & Nikon appears to be ISO 100, while that of the Sony looks to be lower. Higher sensitivities are obtained by amplifying the analog signal from each pixel well. This can be done either before or after the analog signal is converted to digital data. Since the data from each pixel well is a monochromatic luminance value based on how much light was allowed to pass through a red, green, or blue filter in front of the sensel, the data must be demosaiced to provide color information (or tonal values if the data is converted to a monochrome image).

This ISO setting is totally different than the set shutter speed. None of them have a shutter speed setting that exceeds 1/8000 second, yet all of them have ISO ratings well above ISO8000. The quality of the pictures obtained at those very high ISO settings are not that much unlike what you would have gotten if you had shot film at such high ISO settings. And for cameras with a focal plane shutter, even shutter speeds such as 1/500 second take longer than that to expose because the transit time of the two shutter curtains crossing the sensor (or film) is longer than that. As the first curtain moves across the sensor to uncover it the second curtain chases behind it to cover the sensor back up. How wide the slit of exposed sensor between the two is, along with how long it takes each curtain to move completely across the sensor, determines how long any specific point on the sensor is exposed to light coming through the lens.

Not the answer you're looking for? Browse other questions tagged digital image-quality shutter-speed or ask your own question.

29
Is high ISO useful for photography?
22
What exactly is "base ISO" and how do I find what is base ISO on my camera?
129
What is "ISO" on a digital camera?
74
How is ISO implemented in digital cameras?
12
Can someone give a simple explanation of ISO?