What is the purpose of pre-focusing on a Canon AF35m ii?

I am HIGHLY confused as to what this means. 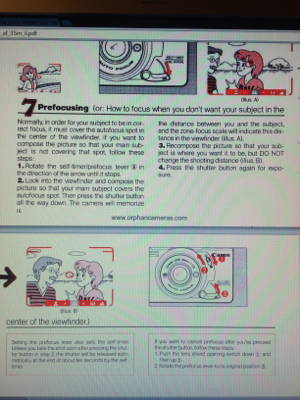 The camera says to press the shutter once to prefocus & another time to take the actual shot .

Why do i have to move after ive pressed the shutter once to memorize distance? Then the manual continues to say the autofocus doesnt work well with black hair, glass windows, fireworks etc & to use pre focus. So if im pre focused on fireworks do i have to move a different angle to take the actual shot? What if i have multiple subjects? Will only some come out blurry? SOMEONE PLEASE HELP !

This is called focus and recompose. Note the position of the focus point in the bottom left picture - it is between the two people. If you tried to focus there, the camera would focus on the background, throwing the subjects out of focus. So you focus on one subject, then recompose so both subjects are now in the frame. You only have to do this in similar cases where the focus point does not cover your subject. If the subject is under the AF point, just go ahead and shoot.

Pre-focusing is a different matter entirely. What the manual is saying is, AF doesn't work very well under certain conditions, so manually set the focus instead. Sometimes this will mean truly pre-focusing, ie focusing even though your subject isn't present: fireworks are good example of this. You manually focus at the distance you think the fireworks will be (using a relatively small aperture to increase depth of field, and thus your chances of getting the correct focus), then when the fireworks pop up into the frame, you shoot.

Sometimes it will simply mean manually focusing on your subject because the AF system won't be able to acquire focus, as can be the case with dark hair or glass. Pre-focusing does not imply focus and recompose.

There are two situations being covered in that explanation, which is probably part of what is causing the confusion.

Prefocusing simply means that you set the focus before you actually take the photo. This can be useful for a number of reasons, including needing faster shutter response (the photo takes quicker after you press the shutter) or needing to focus on something other than where the focal point will be in the shot.

In the first case, auto-focus normally takes some time to figure out where it needs to focus. When you push the shutter release, the camera must focus, make exposure adjustments, and only then can it take the photo. This processing can result in a significant delay ranging anywhere from a few dozen to a few hundred milliseconds or more. If you are shooting something where you need a responsive shutter (action shots for example) that extra time to focus may make you miss your shot. By pre-focusing on something at the distance you want to focus on for the photo, you can avoid the delay of waiting for the focus to process.

For the second case, you may be shooting at something where the focus point either ends up on a point that is not at the right distance or is not something the camera can easily focus on (low contrast regions) when you have the shot composed the way you want. In this case, known as focus and recompose, pre-focus allows you to focus on a more ideal area at the distance you want to shoot and get the focus point set. After that, you can turn the camera to compose the shot the way you wanted and then take the photo. Note that it is important not to move the camera closer or further away from your subject when doing this or the pre-focus won't be correct. Also, if you change the angle significantly you may still end up with some error in your focus due to the way the image plane for the focal length is made, though this is normally only a problem for major recomposes or a really shallow depth of field.

Not the answer you're looking for? Browse other questions tagged point-and-shoot 35mm vintage film-cameras prefocus or ask your own question.

13
What is the purpose of the film leader on 35mm film?
0
What vintage mechanical camera looks like the Fuji x20?
3
What is the purpose of various lens markings on Vivitar 135mm f/2.5 lens with TX mount?
1
How can I use a non-TTL lightmeter beyond its built-in ISO range?
3
Why am I getting black areas at the edge of my film exposures?
2
Canon IIIa Batteries
0
How do I check if a Canon IIIa is still in working condition?
5
Accidentally rewound the film the wrong way
2
I accidentally dropped my kodak m35 camera and the film count reset to S again