I'm looking to do some statistical analysis on the effect on an image of various compression systems, with the end-goal of hopefully being able to determine which is a recompressed version of which. To do this, I need to be able to feed a set of test-images through a assortment of different image compressors.

Are there any resources for this sort of thing? Is there anything like a website where I can submit something, and get versions recompressed via an assortment of compressors?

Alternatively, is there any good information on which compressors are commonly used? I'm realizing I don't even know to what extent most of the image editors out there share code.

I'm basically going to answer my own question: No.

There are no decent facilities for comparing JPEG compression libraries.

Additionally, I did some further experimentation which effectively invalidated the hypothesis that produced my desire for a comparative analysis in the first place, so the whole question is somewhat moot at this point.

I did a bunch of testing with the compressor used in PIL (which is libjpeg): 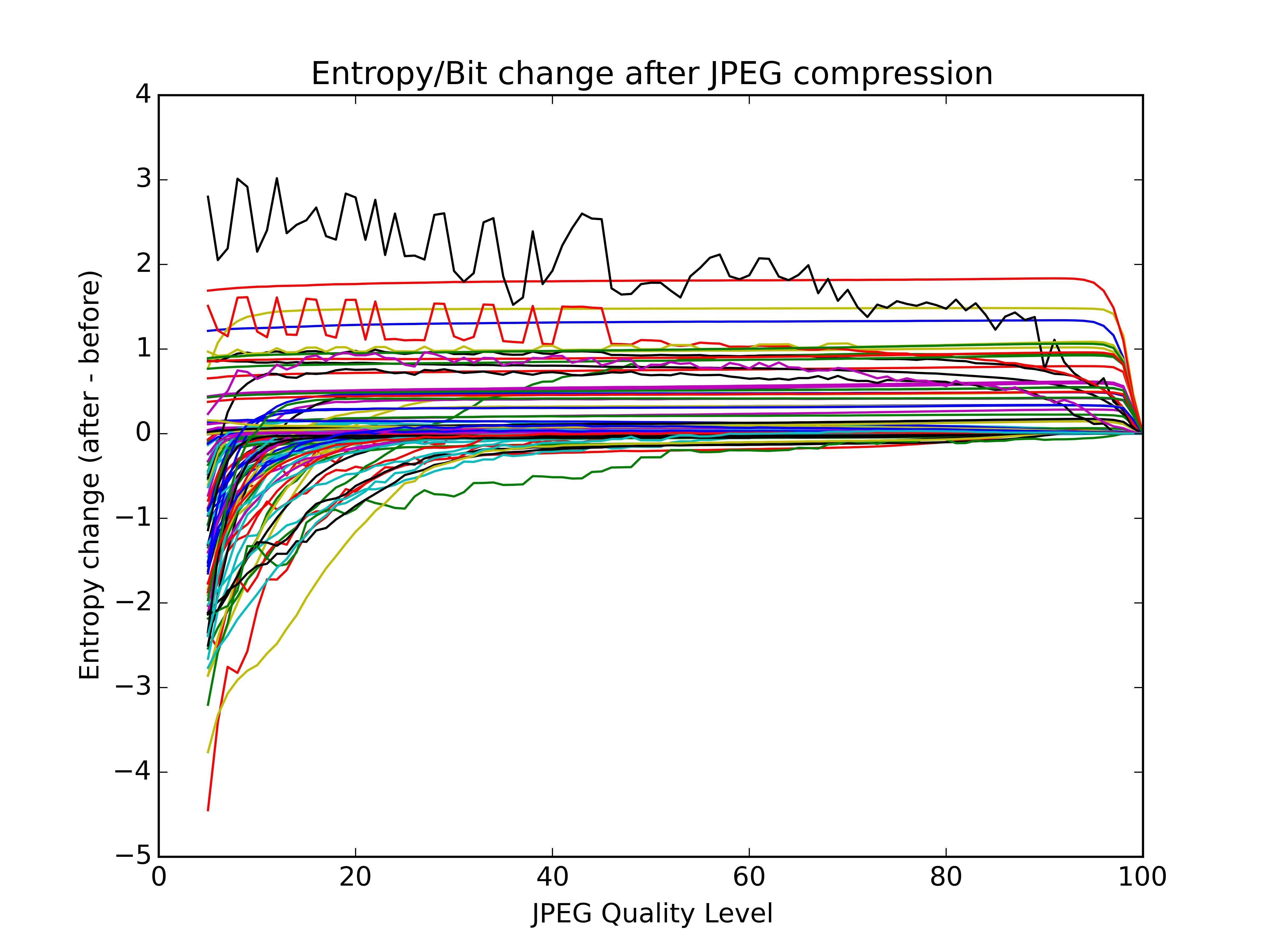 This is over the corpus of the USC-SIPI image test set, looking at the average entropy per pixel as a function of various compression ratios.

I did a writeup here.

I am not sure if you are looking at different compression options strictly for JPEG or if you are interested in other formats with lossy compression.

But in any case, I think Imagemagick would be a good starting point. It is a command line based tool and there is also PythonMagick that I never used, but which allows using IM directly from Python scripts.

Here is some reading about JPEG options in IM: http://www.imagemagick.org/Usage/formats/

And here is a list of supported file formats, in case you consider supporting other formats like Jpeg2000 etc.: https://subversion.imagemagick.org/subversion/ImageMagick/branches/ImageMagick-6.5.5/www/formats.html

Edit: Reading through the resources I linked above I found JPEG online laboratory that might be useful for your work.

Also: If I remember well there's no such thing as "different compressors" - JPEG is one strictly described compression algorithm. To simplify: implementations differ only in how value X on your compression scroll bar translates to the compression strength in the actual algorithm, but the algorithm is always the same.

4
Manipulating images at different spatial scales
2
How does the spectral sensitivity of different sensors affect the resulting photo?
1
Why doesn't PNG show more detail than JPEG in a converted NASA image?
11
What would happen if a camera used entirely different primary colors?
9
How can I stitch images with the same center but different peripheral content?
7
Is it possible to find out what compression ratio was used for a particular JPEG?
15
How can I convert an Apple iOS HEIF image into JPEG?
6
How do I fix the color in this photo using Darktable to match the out-of-camera JPEG?
1
Why does GIMP increase the size of exported JPEG files?