Is it possible to trigger a Canon 600 EX-RT with a Fuji's on-camera flash?

I was playing yesterday with my Fuji X100T and got curious if I can use my Canon 600 EX-RT Speedlite as an optical slave to the built-in flash on my Fuji X100T. Is this possible?

You can buy cheap flash triggers that will trigger a flashgun via a PC cable or hotshoe adaptor. They just look for a flash of light, then trigger the connected flash. May be enough for you if you're using the Speedlite in manual mode and the Fuji is only generating one flash (any pre-flashes for red-eye reduction, or ettl metering would need to be disabled)

Here's one I used to use with an old flashgun: 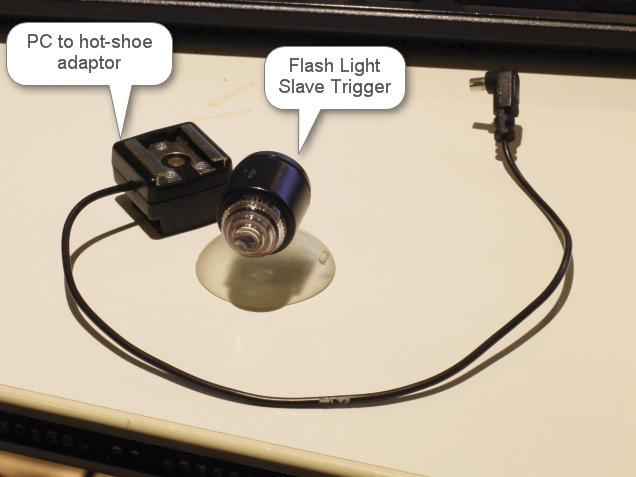 The Flash Light Slave Trigger bit has a PC socket on the back so can be connected to trigger any hot-shoe flash gun with the PC to hot-shoe adaptor also in the picture.

You can also get the flash slave trigger built right into a hot-shoe adaptor e.g.

The 600EX-RT doesn't have a built-in dumb optical slave, it only understands the Canon wireless communication systems (optical and radio), which the Fuji doesn't speak. However, you could stick a dumb optical slave (such as the green-based Sonia optical triggers) on the PC port of the 600EX-RT, and trigger the flash manual-fashion if the Fuji's pop-up flash can be fired without a pre-flash (i.e., not in TTL). And, of course, radio triggers or sync cables would work with the 600EX-RT as a manual flash.

You can also use a Yongnuo YN-E3-RT dedicated radio transmitter unit, and you'd have remote manual power control over the 600EX-RT, but you do have to press the test button to transmit settings before you take the shot. No TTL or HSS. The Canon ST-E3-RT, however, won't work for this.

Doubtful. Canon's flash system uses a special set of pulses to communicate flash power information and sync details to the flashes in the system.

It is unlikely that your Fuji camera implements support for this protocol and without that support, you can't remotely fire the 600EX-RT.

There are other third party speedlights and strobes that you can get that do simply trigger off the flash or pre-flash of another camera though. Those would work fine with your X100T.

I've triggered my Canon 580ex flash with my Fuji X100T using a PocketWizard setup. No it will not do any TTL triggering but I shoot manual anyway and don't need TTL control when I'm shooting with the Fuji. The center pin on the X100t should trigger most wireless flash transmitters properly.

Unfortunately the 600EX pc terminal is designed for a trigger from a canon camera through a sync cable and when you use optical triggers the flash will fire once and then turn off the sync terminal to protect itself, you then have to turn the flash off and back on again to reset the flash terminal so it will work again, apparently there is some optical triggers out there that will not course this problem but you will have to do some research to find one.

Not the answer you're looking for? Browse other questions tagged flash off-camera-flash hotshoe-flash wireless-flash fujifilm-x100 or ask your own question.

4
How to use built-in flash with off-camera 430ex ii on my Canon 600D
1
Fire speedlite 580ex with on camera flash (without transmitter)
2
Can I trigger a Nikon SB-600 off-camera with any other flash on the hotshoe?
0
Can I trigger multiple Yongnuo manual speedlight with one Nikon camera?
1
Off camera flash with cheap camera
2
What setups work to trigger a Profoto B1 and Canon 600EX-RT Speedlights together from canon body
0
Is it possible to trigger a camera from a flash, which is triggered by another flash?
0
Canon Wireless Flash Options
2
Unable to trigger my Speedlite YN565EXIII via optical trigger using a Canon 750D (Rebel T6i)