How to judge the difference between the real photo and what you see in LCD? [duplicate]

Ask Question
Asked 7 years ago
Active 7 years ago
Viewed 1k times
6
This question already has answers here:
How do I tell if an image is exposed correctly when I can't trust the LCD? [duplicate] (2 answers)
Closed 7 years ago.

I'm interested in night sky photography. I most of the time travel for taking photos. But I got a terrible problem. At dark nights I have to decrease the LCD's brightness to not bother my eyes. When I check out the photo in LCD, its seems perfect but in computer it is underexposed! and exactly vice versa e.g if I set the brightness to maximum I take overexposed photos. How do you judge the brightness of your photos in LCD that make no difference with the real photo? Thank you in advance

Read the histogram, not the image on the LCD.

In addition to errors because of screen brightness vs ambient brightness, the image on your screen is corrected by your camera before showing it on the screen. Most cameras allow you to adjust that, to remove saturation/sharpening adjustments, but you're still trying to judge your raw image based on an "edited" image on a tiny screen.

You need to read the histogram instead. The histogram is a graph of how much data you have at each brightness level. For stars, you're looking for

Edit: I was on my phone earlier and totally botched my description of what the histogram should look like.

When reading a histogram, the exercise is left to the photographer to decide what information falls where on the brightness scale, and therefore how best to use the dynamic range of the camera. When photographing stars the important data is just a few bright pixels, which is not going to be easily spotted in the histogram. Most of the histogram will be dark pixels, and it's ok for them to be near or below the bottom of the histogram—there's no "shadows" to recover later in post processing. What you want to look out for, then, is a small spike on the right edge of the histogram, indicating clipped (lost) information. As a result, the histogram will look very unbalanced.

Here's an example of the lightroom histogram of one of my star shots, you can see it's skewed to the right so that there's no clipping of bright stars. I shot this under optimal conditions straight into the Milky Way, so the sky was bright enough that I was able to fit the entire dynamic range of the image into my camera's dynamic range (no clipping on either side). Full resolution here. 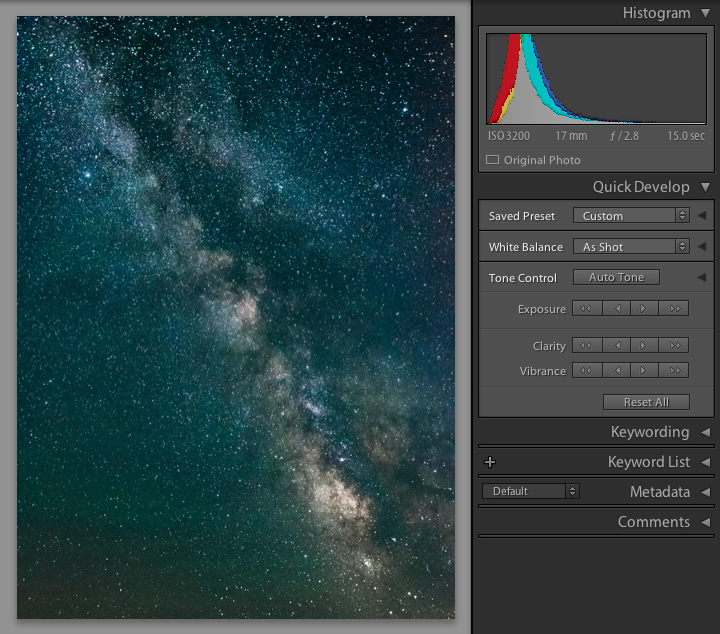 Technically I could have made my exposure slightly brighter to bring my histogram slightly closer to center and improve the tonal range in the darker, colored parts of the image, but with my equipment I did not want to push past ISO 3200 and after 15 seconds the stars would start to show motion blur.

Not the answer you're looking for? Browse other questions tagged exposure lcd rear-lcd or ask your own question.

1
How do I tell if an image is exposed correctly when I can't trust the LCD?

6
How does adjusting the brightness on my LCD screen affect the photo?
19
What is the difference between luminance and illuminance?
3
How to best view test shots on camera LCD in bright, outdoor photo shoot
1
Why is there a difference between what I see on my camera's LCD and the final image?
0
How can I make it easier to see the LCD of my Nikon camera in bright sunlight?
11
What's the difference between "Fake HDR" and real, bracketed exposure HDR?
1
Can you set a timeout on the Sony A6300's LCD screen?
1
Sony a6000 gets correct exposure while auto focusing, but wrong when focusing is complete
0
What Nikon DSLR has this colorful user interface on the rear LCD?