What setup would I need to photograph the numbers of a plane overhead? [closed]

Ask Question
Asked 7 years ago
Active 7 years ago
Viewed 268 times
-1
Closed. This question needs details or clarity. It is not currently accepting answers.

I need to take a photo of a plane that flies over my house. Can someone recommend an inexpensive setup which would enable me to get photos good enough to see the numbers on the plane?

The plane comes at random times.

I welcome your suggestions.

Also, I am entry level amatuer at photography.

IMO this will be somewhat hard (but not impossible)

Have a look at a site like : http://planefinder.net/airport/ to track planes in real time.

If wanting to do this automatically: (I've not done this, so I'm putting down ideas, but it looks hard)

If wanting to do this manually: (sooo much simpler and cheaper).

You will probably need a Telephoto Zoom lens, something like a 50-300 mm zoom, which should be enough for most cases.

You could even use a "bridge" camera.

As other users have mentioned, this depends highly upon the height of the plane. Having taken a few photos of a plane flying above recently, I can share with you my results. For this effort, the plane was presumably cruising (I'm in so-called flyover country). If the plane is closer to the ground, you're in a much better position than I was.

This was taken at ISO 100 at 300mm (fully extended for this lens, not exactly optimal territory). 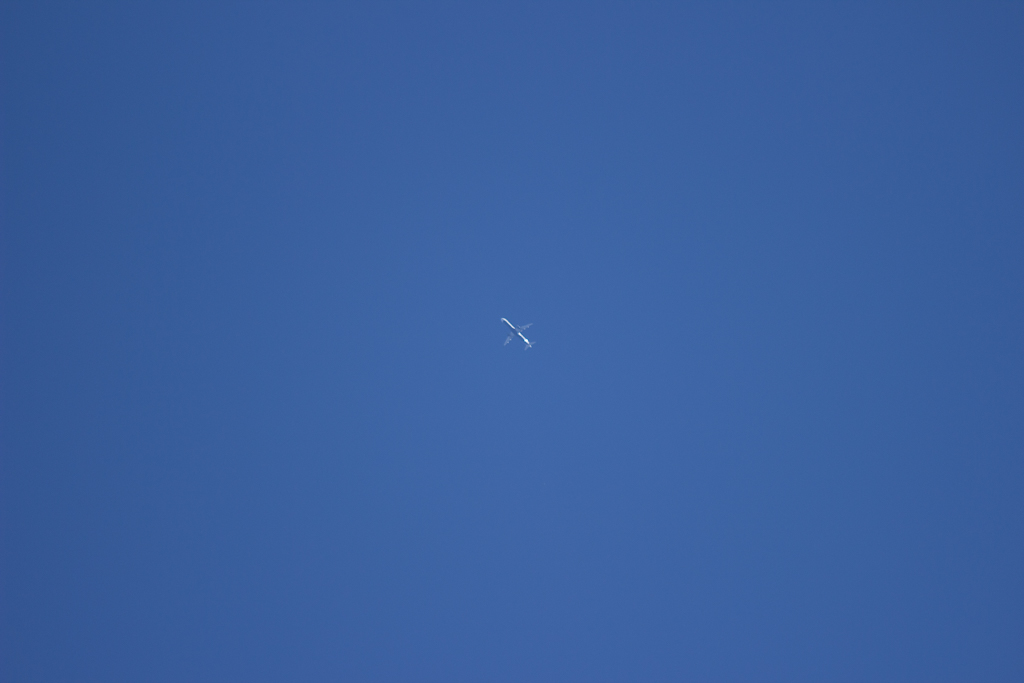 Even at 300mm, the plane is quite small in this photo. Here is a cropping of just the plane: 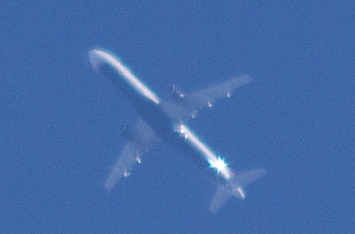 I played around with settings briefly, but the data just isn't there. As a result, if you're trying to get a plane while quite high up, you'll need something significantly more powerful than 300mm. Depending on the prominence of the numbers (I can't even locate where they would be in my photo), a 600mm or more may get what you want, but even that could be difficult. Of course, if your goal is to just get the information on the plane, rather than necessarily getting a photo of that information, there much better ways to do this, as described by other users.

Assuming you already have a DSLR camera body, you could probably rent the necessary lens for the day or a weekend or such to save money if you don't need the lens afterwords.

I'm guessing this would be a lot harder than it looks. I just got a picture of a plane taking off from my local airport by accident in a shot the other day and I'm guessing the plane was only around 5 miles away since that's how far the airport is and it came out looking microscopic! Best bet would be find out ahead of time what airport the plane is taking off or landing at and take a picture of it at the airport. If you just want to know what airplane it is without having to take a picture you can just use an app like Flight24 for iPhone and you point your iPhone camera at the plane as it is passing overhead and it'll tell you all the details about that particular plane!

Not the answer you're looking for? Browse other questions tagged equipment-recommendation airplanes or ask your own question.

28
What tips and advice do you have for photographing the Aurora Borealis?
7
What is the best camera to buy for a child to help them learn about photography?
0
What camera do I need for equine / sport photography?
2
How would a mobile phone with external zoom lens compare vs DSLR?
2
What type of lens equipment would work well for portraits of makeup clients? Is a standard 18-55mm enough?
6
What features should I (as a beginner) look for in cameras to photograph esp. cities, landscapes, and night shots?
4
Upgrading from a modern smartphone camera without going all in on a DSLR kit
1
Portable astrophotography mount/tripod suggestion