Why did my whole roll of film shot with my Olympus Infinity Zoom come out blank?

I took good photos on my Olympus Infinity Zoom 180 — I believe. I took it to CostCo to get developed, since I favor their quality of printing. But the problem is that the roll came out complete blank!

Is this my cameras fault? First time this has happened to me. Did it not capture any of my photos onto the film, or is there another explanation? I did not expose any of the roll it to light. But i did, would only that exposed strip of the film be ruined, or does the whole canister go bad as well?

I heard the film advance and wind every time I took a shot. I know I loaded the film correctly... it was placed into the winder thing, and I heard it advance into shot one. I have also used this camera before with no problems.

The inside of the camera will look something like this: 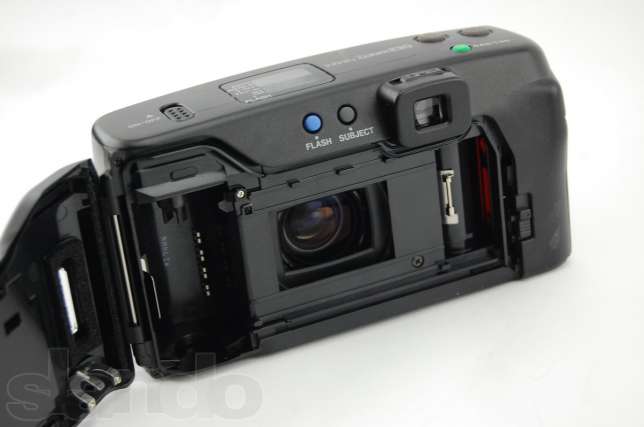 Film is loaded on the left, and then you pull at the leader out sufficiently far:

The wording in the manual is "to the red mark" which can be seen just inside the right hand part of the camera.

Note that the leader is pulled all the way to the right spindle. If it is not this far, the film will not be caught by the winding mechanism and, well, the film won't advance and you won't take any pictures.

This is likely what happened.

Another option is that a sprocket in the film tore when the film was being advanced. This would have been in the very early part of the film, possibly the leader which would have prevented the film from advancing, even if it sounded like it was. Examine all the film including the leader if it was returned to see if this was the case.

Not the answer you're looking for? Browse other questions tagged dslr troubleshooting film olympus or ask your own question.

4
What happens if I take too many shots on a film?
3
My roll of film didn't rewind inside all the way
0
Whats wrong with my roll of film?
15
Why have all negatives been exposed to one frame?
1
Film did not rewind
2
New roll of film rewound into canister after 4 exposures
2
Did I ruin my film when I opened my Canon Sure-shot telemax film camera?
0
I used a roll with 36 exposures, but I was only able to get 26. Does anyone here knows what happened?
2
Did my Nikon FM2n let me advance through the end of the roll of film?