How do I get accurate color when taking a photo of an LED? 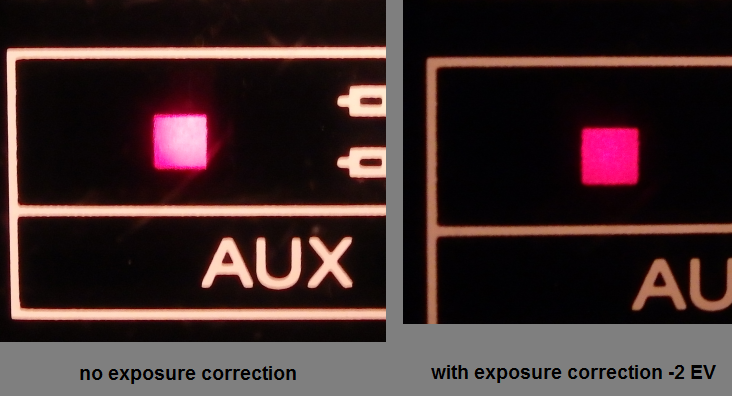 When I'm taking a photo of a LED diode (turned on), it appears to be brighter than it should be and its color is false. For example, red diode looks pink. I have tried changing white balance or use faster exposure, but it didn't help much. Could the diode emit invisible radiation (e.g. infrared), which fools camera's sensor?

On the left photo you can see original picture (LED overexposed). The right photo was took with exposure correction: -2EV (color is still pink, for naked eye it is red).

LEDs emit a narrow frequency band of light. Digital cameras detect color by looking at black and white luminance (brightness) sensors that go through a grid of colored filters (red, green and blue). If the frequency of light from the LED is narrow enough and doesn't match up well with the filters on the sensor, you can get odd looking color as the narrow frequency of light is largely filtered out and you only get a little bit of the edge where it bleeds over.

This is encountered a lot in LED stage lighting where you need to get special LED stage lights for ensuring good color when filming with digital cameras. The same principal applies to still cameras and single LEDs though.

As for the brightness, I doubt it is actually coming through as too bright relative to everything else, more likely, your just not seeing how much of a difference in brightness there actually is. While your eyes do have a similar dynamic range (the difference between the darkest and brightest spot) to a good modern camera, your eyes can shift much faster, giving an apparent dynamic range that is much wider. Your brain and eyes do this in the background very quickly without it really being obvious, but you rarely actually look directly in to a light source and if you do, your eyes normally narrow quickly to adjust. Direct emitted light would be considerably brighter than the surrounding reflected light in almost all cases.

Most likely reason is the diode is overexposed. That would cause (the red channel) to be blown and the red color will appear faded. Decrease the exposure. Depending on what else is in the shot, the white balance could also be off. You can test that by including a white or grey card in the shot and checking and correcting in post.

There are two problems here: exposure and white balance. I assume the markings on the device are supposed to be white: they're not in the images you post, which indicates a white-balance problem.

Here's how. Suppose that the true value of the colour of the light is two parts red to one part green (which would be a sort of orangey yellow, but it will do for illustration). Now, let's consider some different exposures of the same colour. For the first exposure, imagine that the red component registers at 60% intensity, which means that the green will be at 30% and the colour will be recorded properly. Now, imagine taking another photo with twice the exposure. That means the green will be at 60% intensity and the red should be at 120% intensity but, of course, it can't be. It'll be at 100%, so the colour won't be recorded correctly: instead of two parts red to one part green, you'll get two parts red to 1.2 parts green and the colour will look a bit too yellow. If you expose for three times as long as the original photo, you'll end up with the red at 100% intensity and the green at 90%, which is a very yellow two parts red to 1.8 parts green. A common situation where this happens is in photographs that include blue sky on a bright day: if you notice that the sky looks too cyan-green in your photograph, it's because the blue channel maxed out so what you see has too much red and, especially, green in it.

Unfortunately, even if your camera has a highlight alert, it probably won't be triggered by just one colour hitting maximum intensity. The only way to avoid overexposure messing with your colours is to set the histogram to show all three colour channels (red, green and blue) and to check that none of the graphs is bunched up at the right-hand side, which would indicate a colour maxing out.

Not the answer you're looking for? Browse other questions tagged color led-lighting or ask your own question.

9
Red LED not red but white after I take the photo
7
How to avoid blown colours in one channel?

26
How do I get good colors when taking pictures in the city at night?
1
Can I leave a smartphone's LED flash on continuously before taking a photo?
1
Any way of achieving accurate color saturation?
4
How to rank the CRI of no-name LED lights using simple DIY tools?
0
Why is a LED light flashing when used in my Omega C700 enlarger?
7
Why does the NEOWISE comet appear green on my photos?
1
What are considerations when choosing between flash and LED lighting for macro?
3
Capturing then printing color-accurate images