Does the K1000 need a battery to trigger the flash?

The Pentax K1000 is a classic, all-manual film camera, and just about the only annoying flaw is that the meter doesn't turn off, depleting the battery over time. Even if you put the lens cap on, it's going to die after months on the shelf. While I enjoy my K1000, in this digital age it certainly does spend most of its life in storage, and last time I put it away, I forgot to take the battery out.

I've been experimenting a lot with studio lighting, using the Cheetah Light V850 system for radio-controlled flash. Since it's all manual and I have the exposure parameters already figured out with my digital SLR, I figured I'd take a few shots with the K1000 even with the battery dead. However, with the trigger on the K1000 hotshoe, the flashes didn't fire.

This surprised me, because the camera has a simple standard center-contact hotshoe, and that's what the foot on the trigger has as well. It seemed like a perfect match. I thought that a) the K1000 battery was only for metering and b) the hotshoe was actually a switch, with the trigger voltage provided by the flash itself.

I have another battery on order, but I'm concerned that there is some other incompatibility with this trigger and that the battery isn't really the problem. Are my assumptions about the way the hotshoe works wrong? Why would the battery matter?

After some experimentation with my own K1000, I'm confident that it does not use the battery for the flash.

The camera's manual doesn't outright say this, but it does only mention the light meter when it talks about the battery. Wikipedia agrees.

The evidence that convinced me, though, was reading up on the X sync method, realizing that it is just a contact closure, and experimenting with it to find out how it works.

I reasoned that if the camera's internal battery were used for the flash trigger, I should see ~1.5 V between the two contacts, either continuously or momentarily when the shutter is closed. I tested this with a fast DMM and saw nothing.

Then I tested electrical conductivity between the hot shoe and the X terminal. The "ground" contact is connected all the time, and the "hot" contact is connected only when the two switches on each side of the hot shoe are depressed. (The square cross-sectioned sort of toothpick works great for this.) You can see these switches if you look under the little angle brackets that hold the flash on the shoe. 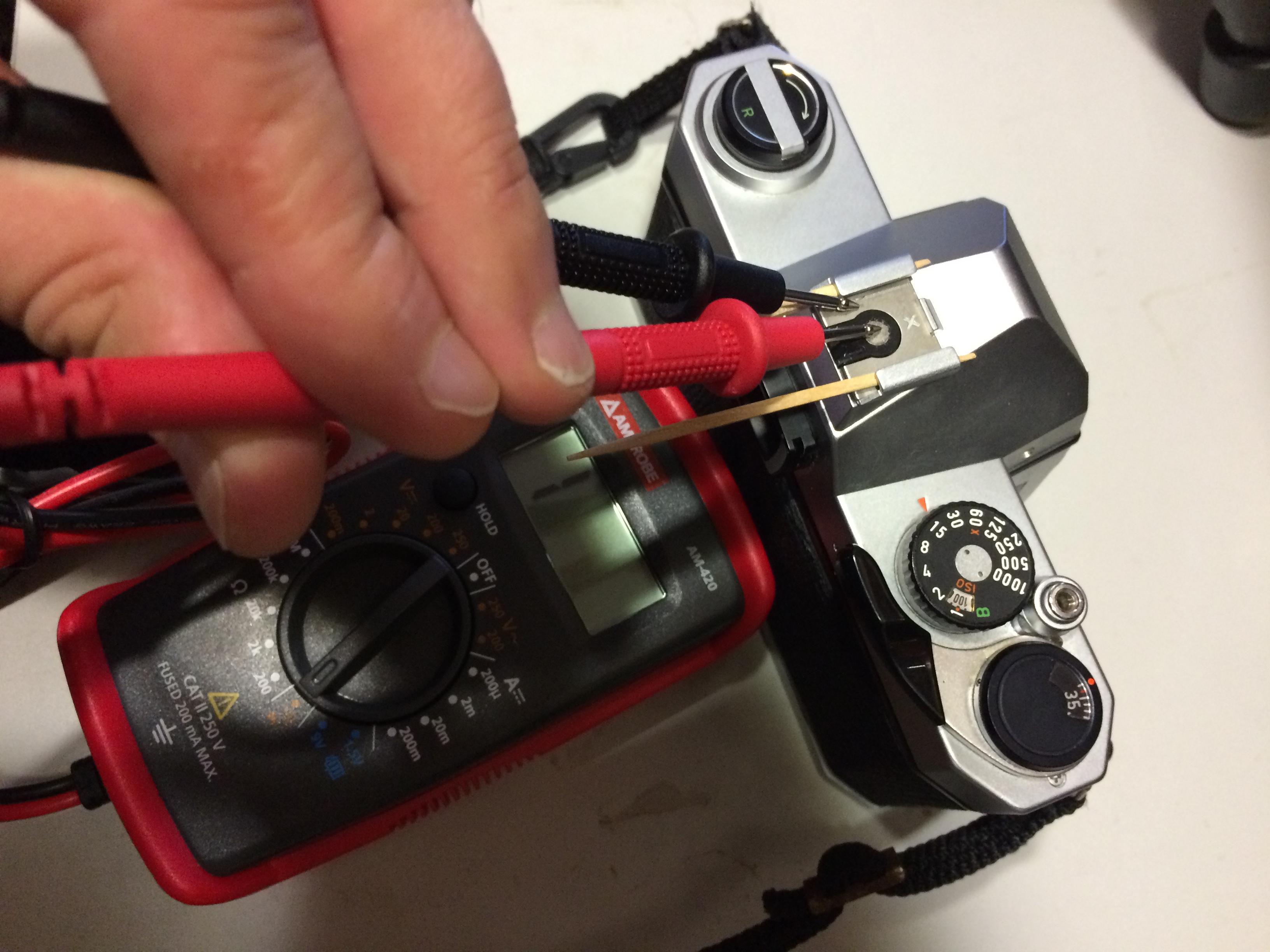 That lead me to try tripping the shutter with my DMM in continuity mode, with the probes across the hot shoe. With each shutter release, the contacts were closed momentarily. The same happened with the X sync connector. (You need a fairly fast DMM to see this. Cheap DMMs generally need more than 1/60 sec to sense a contact closure.)

I assume that this is driven by the mechanical shutter. Two contacts sliding past each other, touching momentarily to close the connection, kind of thing.

All a flash needs to do to sense this is to put a high-impedance voltage on the "hot" pin in parallel with a voltage sensor of some sort. When the contacts close, the voltage source will be dragged to 0 momentarily, which means the shutter just opened.

This is why the camera manual makes a point of telling you that the hot shoe contacts are cold when you use the X sync terminal. Without those switches you see in the shoe, the sense voltage put out by the strobe connected to the X terminal would appear in the hot shoe.

The manual talks about a risk of electrocution. One way I can see that happening is if you have a wall-powered strobe system that's malfunctioned, so that it puts out AC wall voltage to the X terminal. If that appeared on the hot shoe, you could indeed be electrocuted. Such a circumstance wouldn't necessarily damage the camera or blow a fuse.

The comment below tells of another way this could happen, which is probably more likely.

The reverse case — hot shoe to X terminal — isn't as well protected. The X sync contacts are easily bridged by a finger, and the plastic cap is easily lost. I assume this case isn't as worth protecting against since a battery-powered hot shoe flash shouldn't be sending its high-voltage flash power through the hot shoe, but instead a low-power sense voltage. I have not tested that, so just take it as a guess, not a statement of fact.

Not the answer you're looking for? Browse other questions tagged battery pentax wireless-triggers manual-flash or ask your own question.

11
Cheap secondhand off-camera flash with manual power controls?
5
What kind of batteries will provide the fastest recharge/recycle time for a flash unit like the 430EX II?
2
How does the "E" version of Pentax's D-LI90 battery differ from the original?
7
Best practice in charging batteries before an event?
0
Firing a TTL on-camera flash and manual off-camera flashes via radio triggers
0
Does it drain my Sony a7 battery to have "remote trigger" activated?
3
Can I use any brand's non-TTL wireless trigger to trigger any brand's manual flash?
2
Pentax K1000 Hotshoe Broken
5
JJC JF-U wireless trigger does not trigger flash at the right moment