How can I improve portraits when shooting in low light without flash?

I see a lot of questions about low light, and one of them which stood out to me was How can I improve my exposure in low-light situations?

All my flash pictures tend to turn out great, but my shots in low light without flash are always terrible 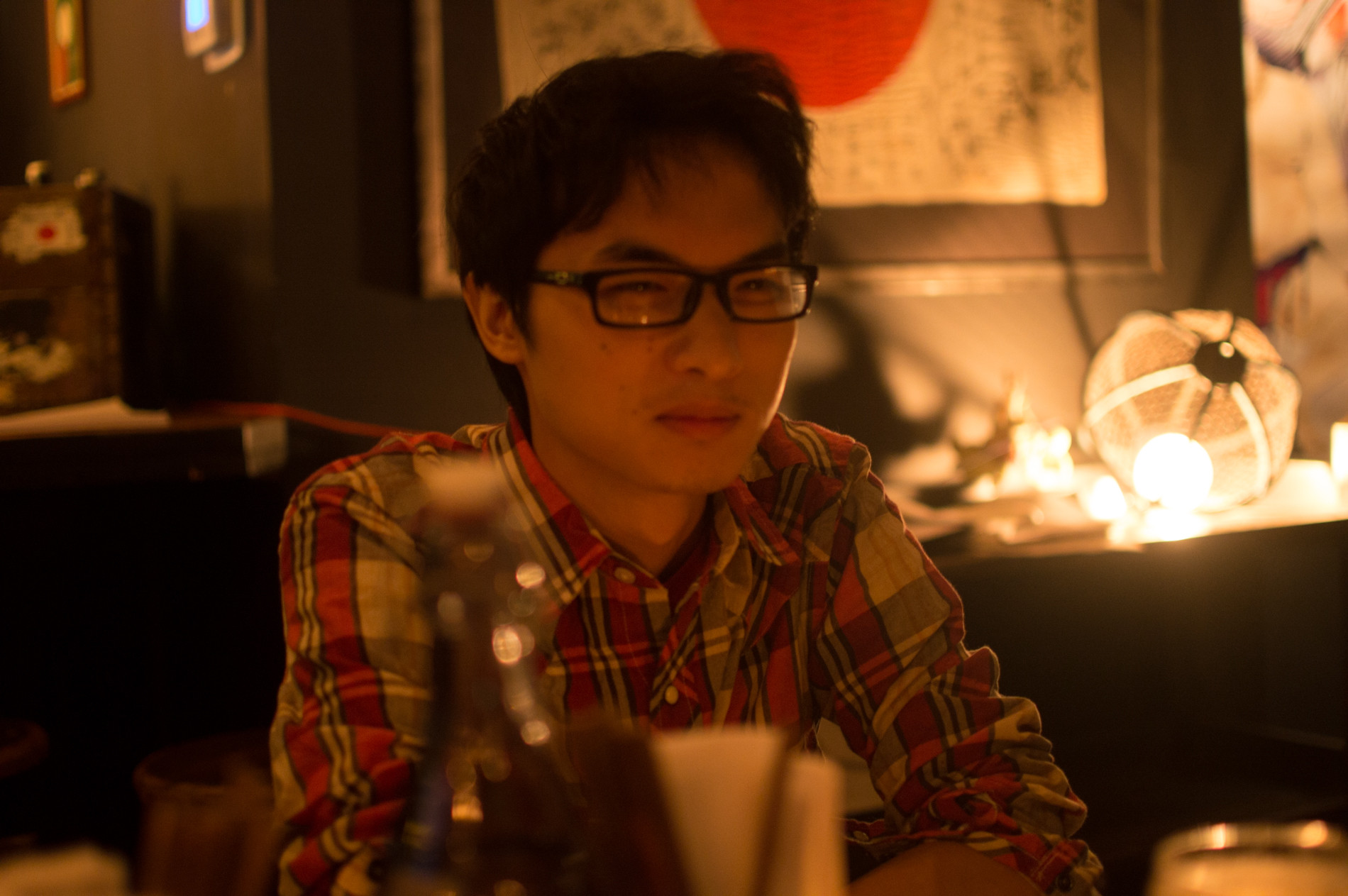 Can someone give me a suggestion of what my settings should have been, perhaps? (Remember that I don't want to use the flash, so I can capture the ambient). It's typically situations or candid portraits like this I would be taking. Also any advice on what quick adjustments I could make if I get a dim result like below? I don't want to ask for the subject to stand still until I get a great shot, so if I get a poor result on my first trial, what settings should I immediately switch to in order to hopefully get my second shot closer to a likeable shot?

Note: getting another body or lens would be a last resort if I run out of options.

The contrast in this photo is very high - the light in the background is obviously very bright, but the face is pretty much in shadow.

To get the face lighter by only changing settings in the camera can be done 3 ways:

If it was me taking that picture, the only thing I'd have done different in the few seconds available, would be to use a higher ISO to brighten everything up a bit. It would over-expose the light in the background, but the face would be better. The other thing you could try is to rearrange things to get a bit more light onto the subject - but I know this isn't always possible on the spur of the moment.

In post-processing, you could try playing with the controls to increase the brightness of the dark areas. I use Photoshop Elements 11 - in their RAW converter (Camera RAW 7.4), the sliders I'd be looking at are Blacks and Shadows, as well as the overall Exposure and Contrast (also worth playing with Whites and Highlights to try to control the light in the background). This is one advantage of shooting RAW - there's more data available to play with afterwards!

One final thought - the flash built into the camera is obviously quite harsh as you know, but it is possible to reduce the power (lookup "Flash Compensation" on page 65 of the manual). This requires a bit of trial and error, but can be useful sometimes. If you have an external flash, they can be either angled at the ceiling for bouncing light onto the subject or can be fitted with a diffuser - both of which will soften the harshness of the flash. And of course, if you're shooting RAW, you can change the white balance back in post-processing to give a warmer feel.

Improving the lighting would be the first thing to do. On your shot, the face of the person is practically unlit, as well as the background, resulting in too much contrast with blown whites on the right. The fact that the brightest light is facing the camera creates lens ghosts, which is probably not what you want.

If you're unable to change lighting, then you can still:

Ignoring the white balance issue which is easily fixed in post, there's a couple of technical things you could look at to improve sharpness:

One thing you don't make clear in your question, but is definitely something you should be thinking about: why did you choose 1/15s, f/1.8 and ISO 800?

You might want to try and use the spot meter setting instead of the average. In the picture you posted there is a bright object on the right side that is throwing off the rest of the picture.

A few things I would consider are:

How close to the original exposure is the photo and what determined the 3 main factors: shutter speed, aperture and iso? If you shoot in manual mode you will have chosen these settings yourself (if you set these yourself I would suggest increasing the iso to at least 3200 and your shutter speed to about 1/30th (tell the subject not to move much or shoot at iso 6400 and put shutter speed to 1/60th if subject isn't quite still). I'm assuming you didn't shoot in manual and you have shot in either aperture priority, shutter priority or program mode or indeed another automatic mode. At which point the camera tries to do it's best based and set these settings according to the cameras metering mode you have chosen.

My guess is that you have not spot metered on the subjects face and the bright light in the background has caused the metering system (either centre-weighted or matrix metering) to underexpose the rest of the photo.

Solution: either apply exposure compensation, probably between +1 or +2 stops or change the metering mode to spot metering and when the focus point focuses and meters the subject it should force the camera to shoot at the correct exposure. I would also check to make sure your exposure compensation isn't set below 0. Also make sure your iso isn't fixed at 800 otherwise the metering system will not be able to gain a correct exposure without lowering the shutter speed to a level that's not suitable for handheld portraiture. Sorry I've just typed this up quickly, if anything doesn't make sense my main advice would be learn about the metering system on your camera and double check if your camera has an auto-iso feature as this would help your cameras metering system in these lower light situations. thanks

With RAW, you don't worry about the white balance when shooting. The ISO is misunderstood and overused with RAW: if the image is too dark, turning up the ISO is no different than fixing it in Lightroom (but explainaions I've read don't consider quantization of the A-to-D step). However, the extended range or whatever that brand calls it can help if the hostogram shows that it's being cut off on the left.

Youn can shoot bursts to get a "lucky shot" among them re camera shake and subject blinking. If you do get the histogram cut off one end or the other and it varies by shot, use auto exposure braketing along with the burst. If not needed, that is the entire histgram is present in different positions on each version, that's harmless and you can still use them to choose among blur and pose.

The go-to control to know is "program shift". Given the chosen exposure value, choose to change the shutter speed / f-stop combination keeping the product the same. Experimentbto see ifbthat affects the auto-ISO setting, too. If so, you can request faster shot with the aperture already maxed out means increase the gain at the expense of noise.

Experiment by yourself in the same lighting to get a good feel for the controls and abilities. Then you can ask very specific questions on details you discover. :)

Raising the ISO, opening the diaphragm, and increasing the shutter speed are the only ways to go, as said above. But be careful with the aperture and the shutter speed: your bright objects will be burnt.

Typically, for the picture above, I would have shot it that way, and then post-processing it.

On the pictures you take, you should have a look quickly at the curves (you can probably do it on your SLR): it shouldn't have any pic on the left nor on the right sides (no burnt and not black spots). Then, you know you can post-process it.

Lets assume in the next scenario you are shooting wide open at the slowest feasible shutter speed. Take home message don't be afraid to use a high ISO in this situation.

Prepare a couple more things before composing the photo.

Not the answer you're looking for? Browse other questions tagged portrait technique low-light camera-settings or ask your own question.

-1
Portrait photography
5
How can I improve my exposure in low-light situations?
2
Does it make sense to "Expose to the Right" except at base ISO?

25
How do I focus in low light for long exposures?
9
Is a 50mm f/1.8 or 50mm f/1.4 a good lens for portraits in low light?
5
How can I improve my exposure in low-light situations?
2
How do I take great formal Christmas party event photos?
2
How to adjust the flashlight properly when to take a headshot?
11
What's the best bang for your buck to improve low light portrait shots: Lens, Flash or Body?
1
How can I better take indoor photographs with wide aperture and low light?
0
How to set correct exposure in low light condition
8
How can I take a low-light portrait of a violinist, without dedicated lighting gear?
3
How to transition from crop-frame to full-frame