Is it possible to use the lenses from a Canon Xl1 on a modern DSLR?

I have a Canon XL1 interchangeable lens video camera. Can I use an adaptor to use its lenses with a DSLR or an SLR? I know about it using a smaller sensor and that it is closer to the sensor (as in Is the Canon XL1 lens (1999) compatible with any of the new prosumer 1080 HD Canon bodies?) but maybe there is an adaptor that gives it some space. I wouldn't mind if the picture is cropped. It's just so hard to sell this for nothing. The optics and glass used in this lens are top end.

Assuming that one could craft a zero width adapter for it and put it on a DSLR, it would not be able to focus at infinity. At all. In order to focus at infinity, you would need something like the adapter for Canon FD lenses to EOS (B&H). Note that there is a single or double element lens in there and it acts as a 1.25x teleconverter and costs a stop of light too. The hypothetical XL1 to ? adapter would be even more significant in its teleconverter nature and cost in light.

The small group of lens elements also means that you will be getting additional aberrations added into the lens system. There would likely be an increase in purple fringing and the like from the lens system that includes this adapter.

However, that isn't the biggest problem. This lens is a by the wire lens for controlling the aperture. There appears to be some interchangeability with the XL1 and XL2 and the EOS line of lenses (Canon EF Adapter for XL1 and XL2 Camcorders) for EF lens on XL1, though I am unsure if there is additional circuitry in the adapter.

Without the ability to control the lens by the wire, you will be unable to change the aperture on the lens (most adapters are for manual focus lenses on a modern body, or within the system - Canon EOS to XL or Nikon F to 1). This means the only hypothetical body that you could put it on, if you can figure out the proper circuitry to handle the single from body to the lens would be Canon.

While vignetting wasn't deemed an issue for the image produced, it is still an issue for the camera in that it means the light meter and autofocus sensors will not be working optimally, or may be trying to take into account part of the image that is outside of what would have been the usable image circle on the XL1. This also becomes an issue for you because the viewfinder will be difficult to use (mostly black with a small circular image in the center). 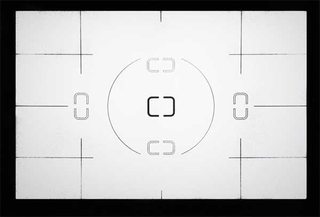 If that was your viewfinder, the image that you would get would be smaller than the circle.

With all of these factors conspiring against you:

you will find that if it is possible, it is not at all practical to do so.

Not unless you only want to use it at close distances only. The flange distance is 29mm for the XL1 and 44mm for the EF mount, a 15mm difference. The maximum focal length of the XL1 is 88mm, so the lowest magnification ratio that you could shoot at is 15/88 = 0.17x. And that assumes an adapter of 0 length. So not only would you lose infinity focus, you wouldn't even be able to focus at moderate distances.

Not the answer you're looking for? Browse other questions tagged canon lens-mount lens-adapter or ask your own question.

0
Will a Canon XL1s lens work with Canon EF mount cameras?
2
Is the Canon XL1 lens (1999) compatible with any of the new prosumer 1080 HD Canon bodies?
0
Is it possible to adapt a Canon XL system lens to a mirrorless body?

13
What should I do to switch my gear from Sony to Canon?
5
Can I use the lens from Canon AE-1 on a Canon EOS DSLR, with an adaptor maybe?
5
Can I use my existing Canon lenses on an EF-M camera body?
2
How would Yashica M lenses compare with modern Canon lenses in terms of image quality?
1
Can I use Olympus OM lenses on a Pentax DSLR?
2
Can old film lenses like Tamron be used with modern DSLRs?
2
Can I use these old lenses from DVT vision systems on modern cameras?
7
Can I use Canon lenses on a Nikon dSLR?
1
What modern camera bodies can use Minolta Maxxum Lenses?
1
How to use lenses from Chinon CS-4 on Canon DSLR?