Does it matter what edge finding algorithm you use?

I was playing around with an action set that I have that creates edge masks using the Roberts, Robinson, Sobel, Prewitt, and Kirsh algorithms. Because of the differing levels of brightness, I decided to see what happened when I used the "equalize" command on all of them, plus Photoshop's "Find Edges" as well.

I was surprised to find that all of the results equalized were very similar to each other. Thinking about it, even though each algorithm may place more weight on a certain edge than the others, they all must be detecting the same edges and giving them the same rank in importance/brightness.

So is there any reason to use one edge-finding algorithm over another except convenience? It seems as though you could use a combination of curves and equalization to make one algoritm's results mimic the results of another's results.

There are a quite a few image processing algorithms apart from those commonly used in photo software. Each are designed to enhance certain properties. For example, some common properties are:

A visual example from http://www.sci.utah.edu/~cscheid/spr05/imageprocessing/project4/ , shows image and its "Canny" edge detection using a low threshold. We can see the jpeg artifacts clearly. 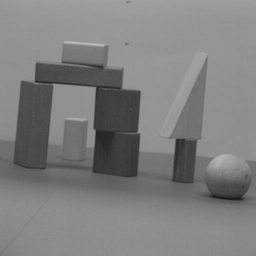 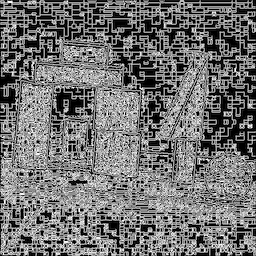 Here is an example of a test image with the response of the edge detector, and the response with thresholding and skeletonisation:

Sobel and Prewitt are similar, but only use two kernels (one x and one y - see TFuto's pdf link in the comments to the question for more info). They have worse localisation than the Roberts method. The Roberts method uses eight kernels (N,NE,E,SE,S,SW,W,NW) and so is also more rotationally invariant and seems to handle corners better. The Laplacian of Gaussian (LoG) looks completely different as it uses zero crossings to find the line edges but struggles with corners.

For a normal photograph, many methods that return a simple edge intensity response (e.g. Nobel, Prewitt, Roberts, not LoG) may well look similar. If the image has sharp contrast the differences may become more apparent.

It seems as though you could use a combination of curves and equalization to make one algoritm's results mimic the results of another's results.

If the kernels are quite similar then this is possible. The Sobel and Prewitt methods are mostly indistinguishable even though the Sobel method weights the centre more.

Does it matter what edge finder you use?

I just remembered that there is another way to create "edge" masks. Picture Window Pro masking module has a "texture masking feature", where you have three choices of method and three window sizes to choose from. Based on the help file, I think this type of edge finding will always produce unique looking results. In PWP's manual's own words

The neighborhood size may be selected as 3x3, 5x5, or 7x7. This selects how large an area around each pixel is considered to be its neighborhood. Smaller values are better at picking up fine detail, but larger values may work better for blurrier images."

Not the answer you're looking for? Browse other questions tagged post-processing image-processing or ask your own question.

7
What workflow should I use for processing RAW photos in Lightroom?
15
Does the order of sharpening and noise reduction matter?
10
How do you use Kodak Color Control Patches for photo color/tone restoration?
32
What does "frequency" mean in an image?
3
Why use UniWB? Doesn't apparent clipping of "final" colors matter more than actual clipping of RAW sensor values?
13
What algorithm can I use to simulate bokeh?
0
Finding out what filter was used in this photo, or simple things like contrast, saturation, etc
1
What does the term "channel" mean in photography?
1
How does the scale of a CCD work and what does the function of gamma do to this scale?