How can I make a picture like this one of a bridge in green landscape seem less plain?

Recently I have taken a photo of this bridge in Japan with my NEX-6. At first I thought it's an okay photo until I showed it to one of my friend and she said it looks plain. How can this photo be improved in terms of composition or other techniques? I was trying to apply the rule of thirds and focus on the bridge when I took this photo. 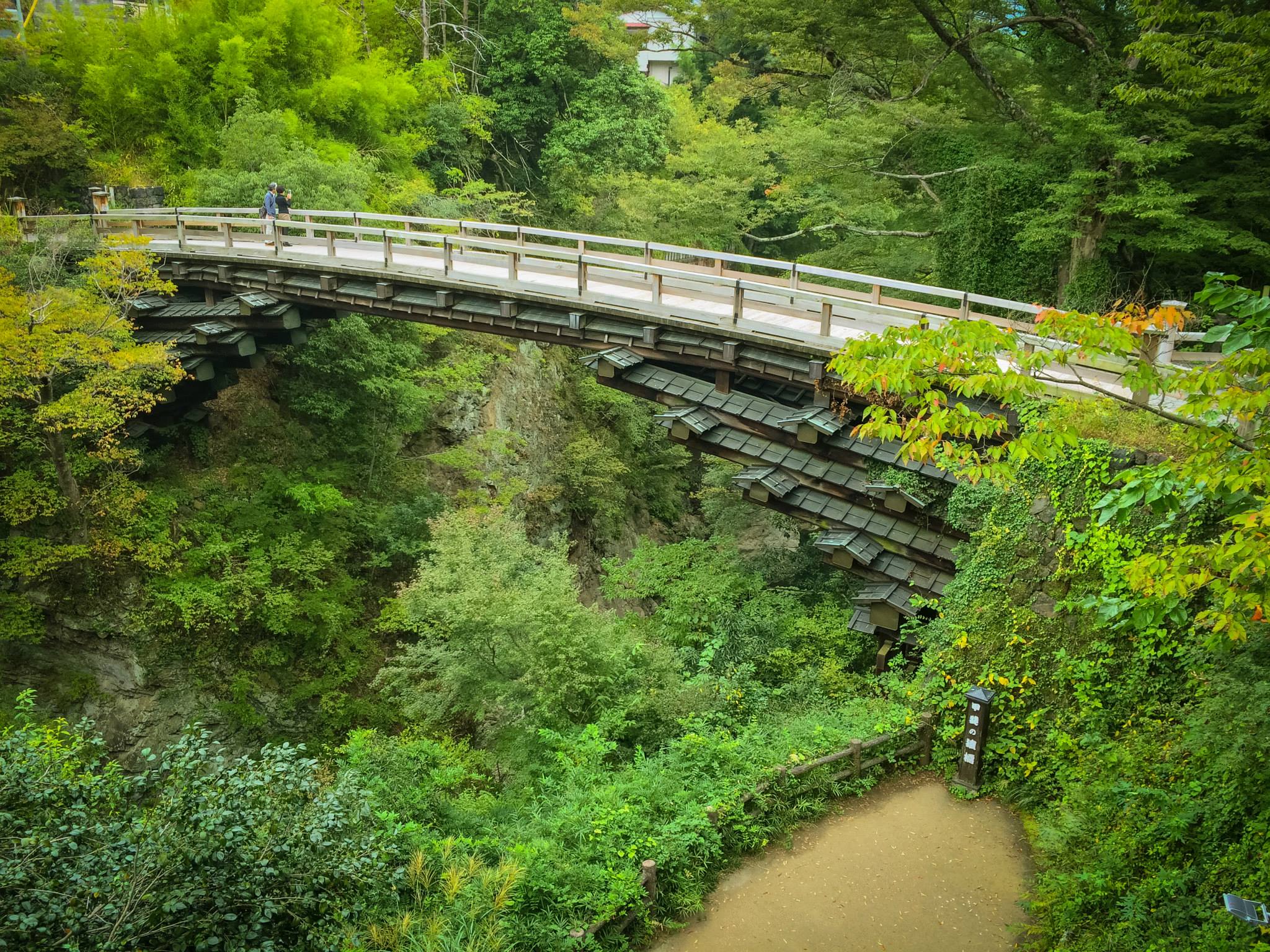 First off, the light is pretty flat. That is both a blessing and a curse. It allowed you to capture the entire scene in great detail (that'd be one of the "blessings"), but it also means that there isn't much that's either emphasized by the light or nearly lost in shadow. The viewer's eye is free to wander, with few stopping points, rest areas or tourist lookouts. That means that you have to create what a more contrasty light (at exactly the right time of day, right day of the year, etc.) might have provided for free. But since you are in charge, you can actually do a better job of arranging things deliberately than nature would have done accidentally. Remember, the "negative" is the score, but the "print" is the performance, even in the digital world.

The first and best bit of advice I'd give to anybody when they're thinking about playing with a picture is to kill the small stuff so that you can see the big picture. Zoom out so that the picture is no more than a large thumbnail. Blur it a bit. Make it black and white. Flop it horizontally. Look at the black and white as a negative. Look for shape and "gesture", for balance or unsteadiness (without letting things get too stodgy or "apathetic"). (Remember to do all of this on a copy of your image.) You will usually see things that maybe shouldn't be there, and places where there really needs to be something more — a deeper shadow, or a splash of highlight, or a broken line of tone that needs to become a single stroke.

If you're working an a layered image editor, use a new blank layer to sketch out the problems/deficiencies. Then when you return to the proper-sized, unblurred image, look for the things in your image that correspond to the problems (or potential improvements) that you found when looking at the "big picture". You'll likely find shadows you can deepen, or tufts of foliage that need to be slightly brighter (or more colourful, or what have you).

If your image editor allows it, make all of these adjustments using separate layers. Lots of them. (In the old days, we'd have no choice but to make a print and take notes, knowing that the first print or three will probably be trashed.) Leave the picture alone for a while, long enough that you are no longer invested in the process you were following (and have at least partially forgotten what it looked like). Fresh eyes are your friend. If you still like the picture a week or two later, you're probably done. (Until you see it again two years from now and ask yourself what you were thinking, of course. Our tastes change over time, and revisiting old photographs almost always begs a change.) If you don't like it so much, you can still change things, usually without having to trash all of your work, if you've used individual (masked) layers to handle individual adjustments.

As user32334 notes, there is a lot of personal preference in a photo. It may be easier to change friends or ignore opinions than to try to please everyone :-).

I won't start to try to give general advice as '32334 has done. I looked at that and decided that my chances of improving on it were small. Instead I'll take the opposite tack and just comment on one aspect of "what I like". If it helps good. If it seems unhelpful you are probably right.

The bridge is awesome. Roofs on beams, Who would have thought. Makes sense I guess,

If I was taking this photo I'd have been so wowed by the bridge that one of the 10 to 50 shots I took of it would convey what I felt without too much editing or adjustment. Mabe that qualifies as point (3) below.

(1) I felt that both the people on the bridge and the other buildings through the trees both detracted from the impression. People have their place, and sometimes its out of the photo, but not always. If I wanted it people-less I'd have waited for them to move on and hope there would be a people free gap. Buildings at top I'd try to deal with with a slightly different siteline.
May be easy. May be impossible. May not bother you.

In this version of your photo I've roughly patched out the people and added some foliage, but, as above my preference is to get as much as possible material in pace "in camera". (And if editing don't do it like in the attached :-).)

(2) Definitely personal preference,but not only the people and buildings feel intrusive, but perhaps the image would benefit from little or no of the viewing area below. I'd be able to compare the with & without shots afterwards to decide :-). in this version you get only a whiff of viewing area. With the material available it does latten the photo more than I'd like - but one of my other versions would have had more foliage etc at top (and as little unrelated buildings as possible) to provide an alternative. which may not have been any better once I'd tried it.

(3) OK. From above, this must be 'Where possible have too much material available to play with rather than too little. Often 1 is all you have. Where there is the opportunity more may help. Some people are liable to greatly dislike that idea. Such is life and personal preference.

I believe simply cropping the lower third would improve the image greatly. It's a excellent photo of the bridge and the gorgeous foliage, but there is so much green it takes away from the bridge and the pair of people on it. The crop would also remove the distracting post and brown area. Simply put your hand over lower third to see if I'm right. More specifically I'd crop downwords from the top of the post.

Not the answer you're looking for? Browse other questions tagged composition landscape or ask your own question.

17
How can I take a picture of the moon as part of a night landscape?
5
How to make a landscape photo like Stanislav Perov?
7
How does one starting out professionally in landscape / nature photography?
4
rotated images appear 'squashed' on digital frame
7
How can I improve this picture of my friend on vacation?
3
What adjustments can make this landscape look better?