What are the 5 basic lighting setups used in studio portrait photography?

In this great answer, the person explains “one of the 5 basic lighting setups used in studio portrait photography”—Rembrandt lighting.

What are the other four? Where should they be used? What are their benefits?

Note: the content originally written for Stack Exchange is also published on my own website photo.pelicandd.com. Although the content is the same, the website contains interactive illustrations which enable to see what each light adds to the setup, as well as the list of books which served as sources.

The lighting setups shown below describe different lighting situations photographers may use in studio or outside to properly light a subject for a portrait photo. Note that those setups should serve more as guidelines, not as strict rules. This is also why angles of different lights are not indicated: it doesn't make sense to put a light exactly at 30°, and to consider that putting it at 25° would be wrong. The illustrations don't make a difference between hard and soft lights either; experiment with both to see which ones are suited better for a specific situation.

The illustrations use four lights. For some shots, the key light is enough, but other shots may require more lights. To lighten the dark parts (especially on the face of the model), one or more fill lights may be used. To separate hair from dark background, hair light can be added to the setup. In order to separate enough the person from the background, use one or more background lights. Finally, reflectors may be used for additional lighting.

Note that in the illustrations, the key light is always on the left. In reality, you need to put the key light on the same side as the subject's dominant eye—the one which looks more open, if any. Another element to take in account is where the person's hair is parted: watch for the shadows hair may cast on the model's face. When choosing the side of the key light, beware of the glare on the eyeglasses too.

In this setup, the shadow of the key light extends to the lower curve of the cheek, while still being relatively short. Closed-loop lighting is a variant where the nose shadow follows the underside of the cheek until the area of the face which is not lit. 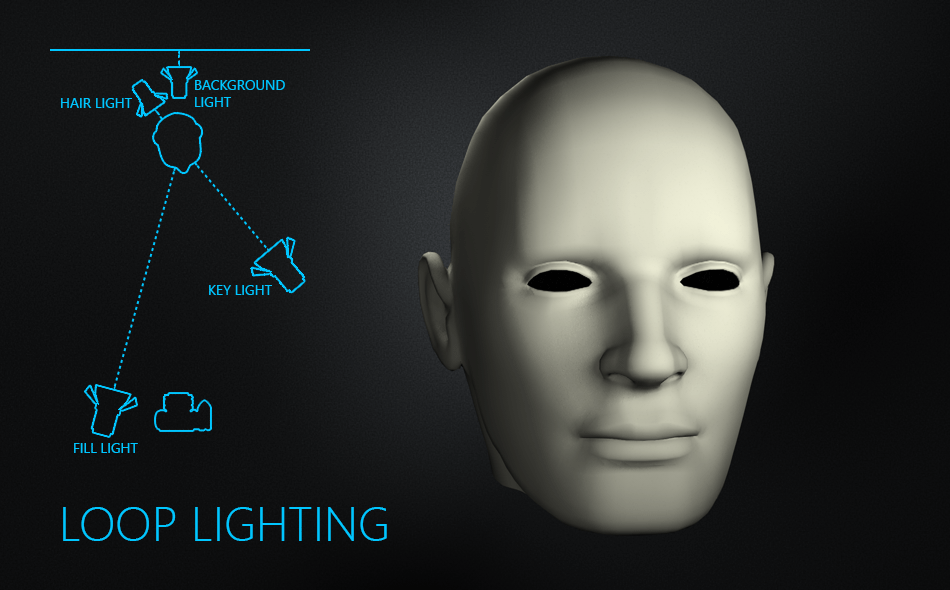 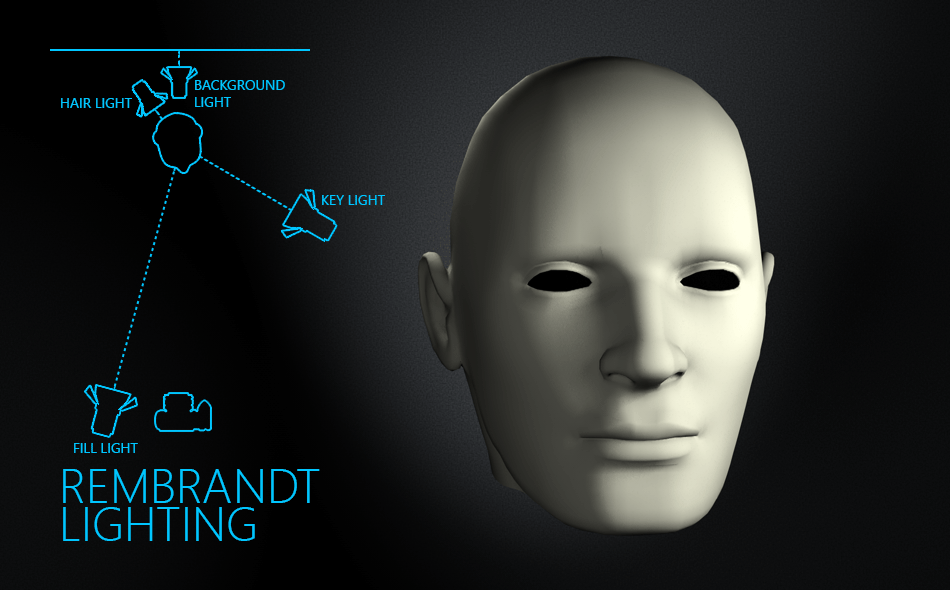 This setup is similar to side lighting, but the difference between two sides is less contrasted, although this lighting is considered dramatic too. 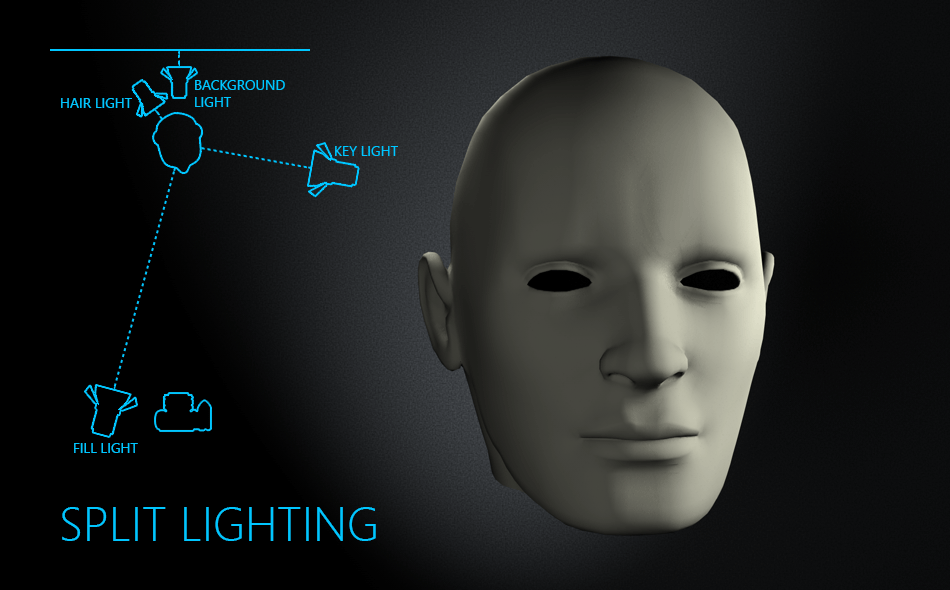 This lighting is dramatic and defining, with deep shadows and sharp contours. Although it is sometimes used with the subject's head turned 90° from the camera lens, the position of the head is irrelevant. With subject facing the camera, the key light illuminates half of the face, shadowing the other side. Sometimes, key and fill lights are equally powered for a more symmetrical lighting, but beware that this setup is often used in low-end portraiture. 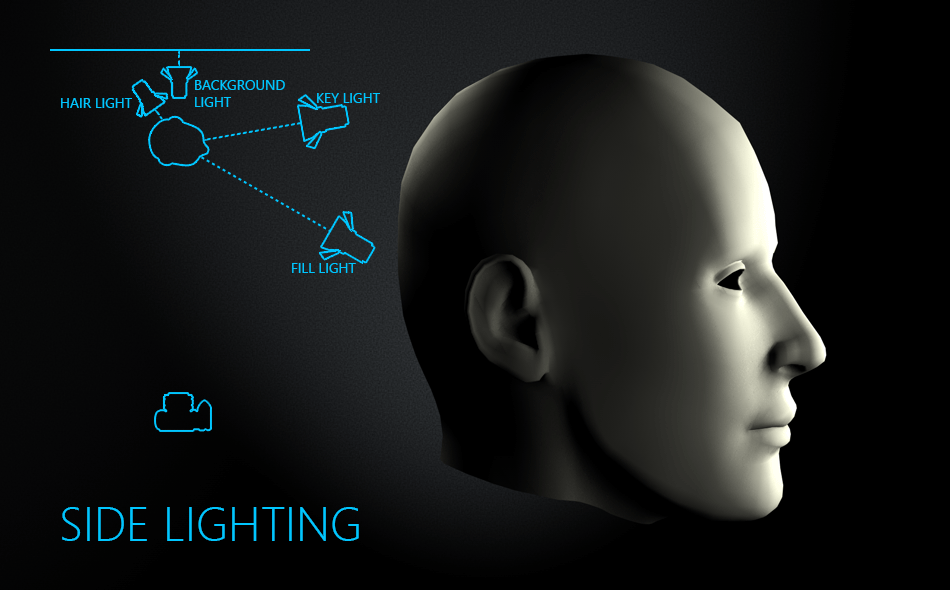 Paramount lighting is produced by placing key and fill lights exactly in front of the face. It was particularly used by Paramount Pictures in the '30s and '40s, which explains the name. 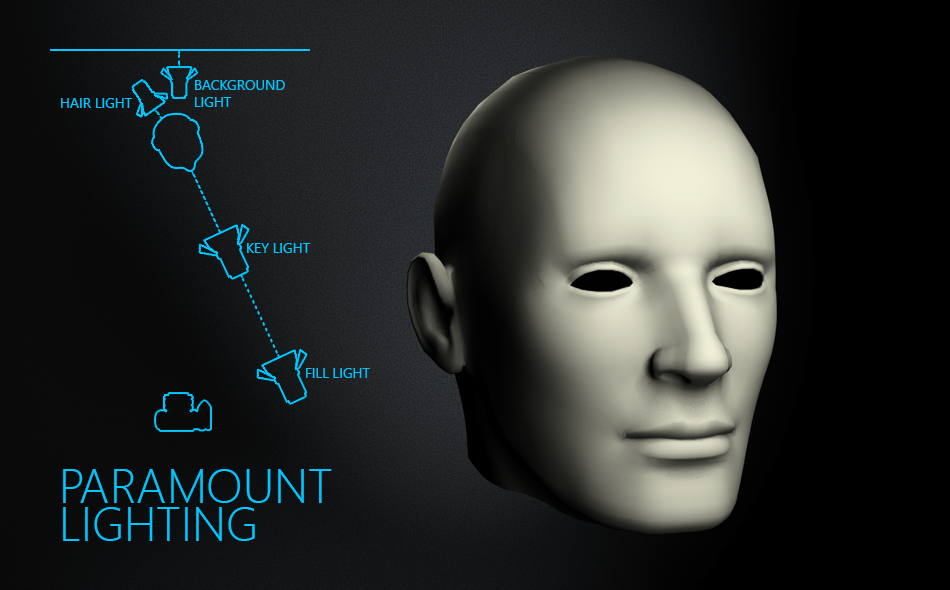 Not the answer you're looking for? Browse other questions tagged portrait studio-lighting light studio-setup or ask your own question.

83
What is Rembrandt lighting, and when do I use it?
4
How do I hide unflattering body features in a low key shot with rim lighting?
1
Differences between shadow placement on a face?

3
Broad and short lighting: is one more flattering for female portraits? for male?
5
How can I set up studio lighting when I'm constrained by low ceilings?
8
Why are there no rotatable sensors instead of grips for portrait photography?
2
Small bedroom studio, what type of lighting for portraits?
2
What qualities are important in a camera for studio portraiture?
2
Are these cheap studio continuous lighting kits good for beginners?
3
Softbox lighting: What to look for in a first studio strobe?
6
What color should I use for the walls and ceiling of a photography studio?
1
Beginner photo studio gear advice