Does the Nikon 85mm 1.8 D work correctly with the Nikon D80 body? I just received mine today and keep getting error reading fEE when the lens is set to all apertures except f/16.

The 'D' series lenses have an aperture ring that you can adjust on the lens. This is different than the 'G' series which do not have that and are completely electronically controlled.

On mechanical cameras, the f/stop is set from the lens itself. You adjust the f/stop on the lens, and then when you shoot the photo, the body closes the aperture to the appropriate setting on the lens. This is done mechanically.

With a camera that doesn't have the capability to use the mechanical nature of the lens (the higher end professional bodies do and can use AI lenses with some restrictions), the lens needs to be set in its most stopped down position to work. This allows the lens to be closed as far as it is capable when the aperture is controlled on the body rather than the lens. 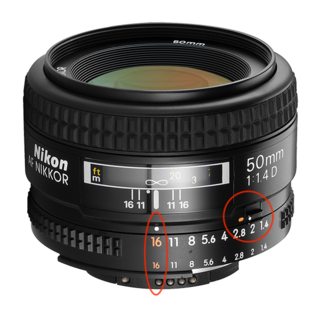 You then control the f/stop setting from the body, not the aperture ring on the lens.

Not the answer you're looking for? Browse other questions tagged lens nikon aperture error or ask your own question.

11
Why is my Nikon 50mm f/1.8 giving me an fEE error?
0
Trouble with Camera settings
8
Which Nikon DSLRs have an autofocus motor in camera body?