Which galaxies can we photograph with a DSLR and a telephoto lens?

I see a lot of photos of the milky way by photographers using wide angle lenses. I'm wondering if there are other galaxies that can be photographed by using a telephoto lens (>500mm). How do I figure out which these galaxies are? Also, can you share any tips on photographing them?

The largest galaxy (other than the Milky Way) in the sky is that of the Andromeda galaxy and is clearly visible in the night sky of the northern hemisphere with the naked eye - if you know where to look (and realize that fuzzy thing is just lots of stars). The apparent dimensions of the galaxy is 190' x 60' (or about 3° x 1°). To put that in context, the moon is half a degree in radius (it varies between 34.1' and 29.3'). This image shows the relative size of the moon and the Andromeda galaxy.

From What focal length lens do I need for photographing the moon? a reasonable 500mm reflex lens (it has the design of a small telescope - though some have been made that really make you wonder where the telescope or lens boundary is) will work nicely for this. You aren't going to be at all concerned about the bokeh of a reflex lens for astrophotography.

Exposure is going to be the problem. The photograph described at M31 describes 100 minutes of total exposure to capture it. There are multiple problems that that describes right away. The biggest of these is that the sky moves with respect to where you are sitting. You need the camera to move too. The photograph described used a polar-aligned tracking equatorial mount that was auto-guided.

You are going to want to get a tripod that looks something like this: 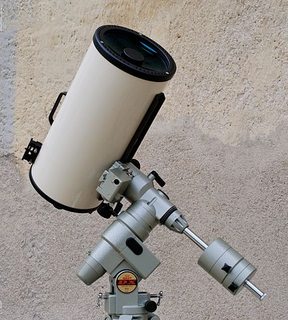 With the proper setup (including a motor) the tripod's head will track a specific spot on the sky once it is set up. You can read more about the equatorial mount at wikipedia. This design means that the tracking of the sky requires only one degree of motion - it spins on the same axis as the sky does.

Note that this is a key thing. Other mounts such as the altazimuth have multiple degrees of motion required to track the sky. They work if you are looking through it with your eyeball, but they don't track cleanly (they move in steps).

Its possible to make this yourself as a baron door tracker, though it won't be as precise as one that is designed for that sort of work and precision made.

For other objects, the best things to look for would be Messier objects and see which ones interest you. Few will be as big (or 'bright') as the Andromeda galaxy (Messier object #31 aka M31). M31 is the third brightest of the galaxies. Going down a bit, the next brightest galaxy is M33 - the Triangulum Galaxy (which is only about a degree in diameter). Other galaxies (such as M51) are only about 10' or so in diameter and you'd only get hints of their structure with a 500mm lens.

It is possible to image galaxies with telephoto lenses. I won't go into a lot of detail, as Michael has already covered most of the basics. I'll simply demonstrate what can be done with a Canon DSLR (5D III in my case) and the Canon EF 600mm f/4 L II lens. I've imaged two of the larger galaxies in the night sky, Andromeda and Triangulum:

These are readily visible from most places on earth except the most southerly. Both galaxies are within our local group. In addition to these two galaxies, the Magellanic Clouds, two dwarf galaxies in close proximity to the Milky Way, can be seen from equatorial and southern latitudes. The Magellanic Clouds are quite spectacular, but for the best view, one should be in Australia or South America (i.e. Chile).

There are a number of other local group galaxies that can be imaged with modest camera equipment. A 500mm or 600mm canon lens with a 2x TC has enough focal length to decently image objects like the Saggitarius Dwarf, or Omega Centauri (which is a gargantuan globular cluster one thought to be a part of our galaxy, but now known to be more akin to a dwarf spheroidal galaxy orbiting our galaxy.) At 1000-1200mm, you could also image a number of more distant galaxy clusters, such as the Leo Triplet, Markarian's Chain in Virgo, M101 or M51 in Ursa Major, and a host of other galaxies or galaxy clusters:

Not the answer you're looking for? Browse other questions tagged astrophotography telephoto or ask your own question.

18
What focal length lens do I need for photographing the moon?

6
What “start up” telephoto lenses do you recommend for Canon for wildlife photography?
3
Zoom Lens and Prime Lens Photo Comparison
6
What tripod heads are ideal to mount a large telephoto or supertelephoto lens on a tripod?
5
Is it safe to use a telephoto lens when the camera is on a tripod?
34
How do I capture the milky way?
14
Capturing the Milky Way: what did I do wrong?
3
What features to look for in a motorized DSLR mount for astrophotography?
1
Will using drizzle for wide field milky way photography provide much benefit?
0
Milky Way with a cell phone, how is this possible?