How do I map white balance settings on the Sony NEX to Lightroom?

My Sony NEX-5R seems to use a different system for white balance settings. In addition to the temperature, there's a second component called "A-B", and a third one called "G-M": 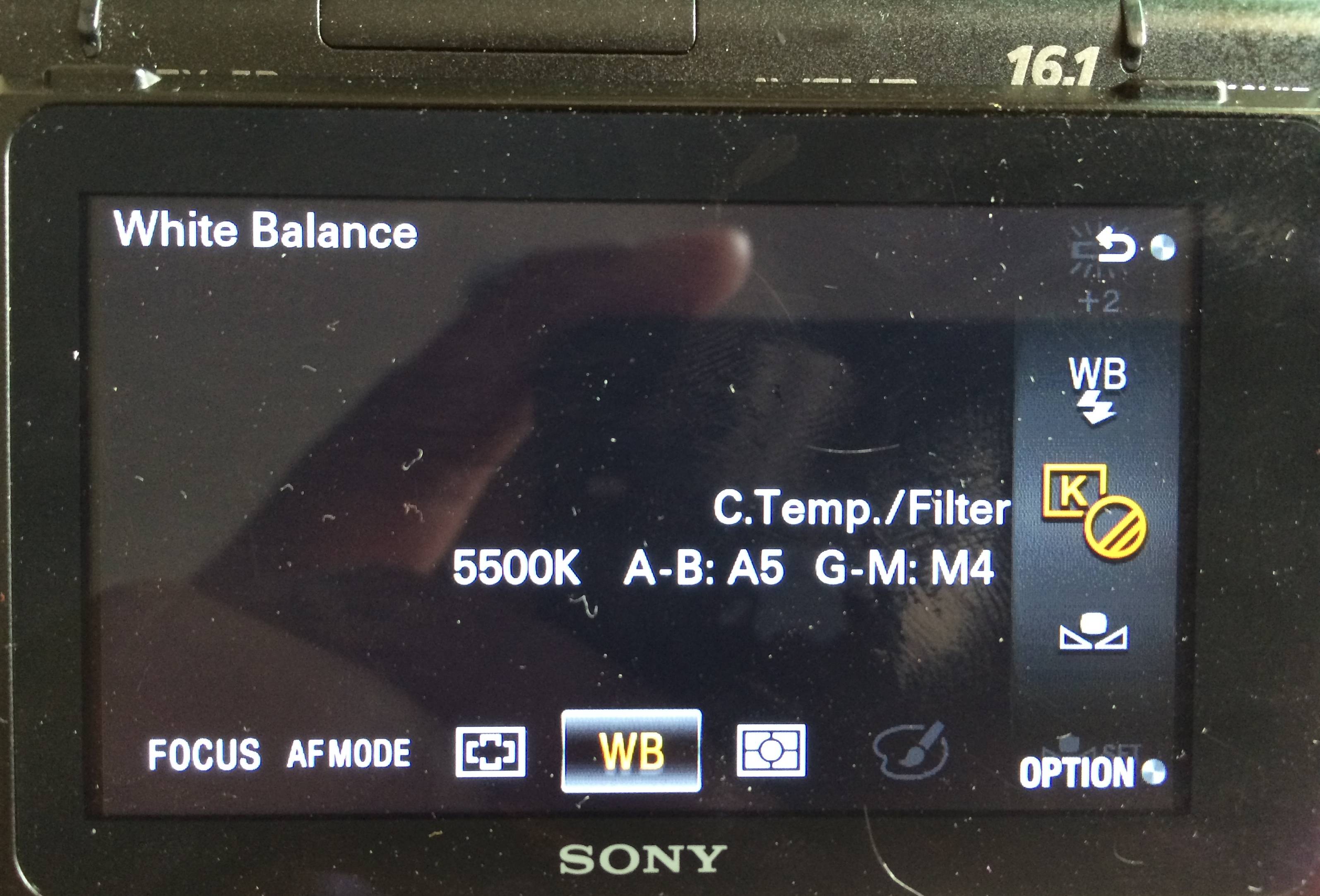 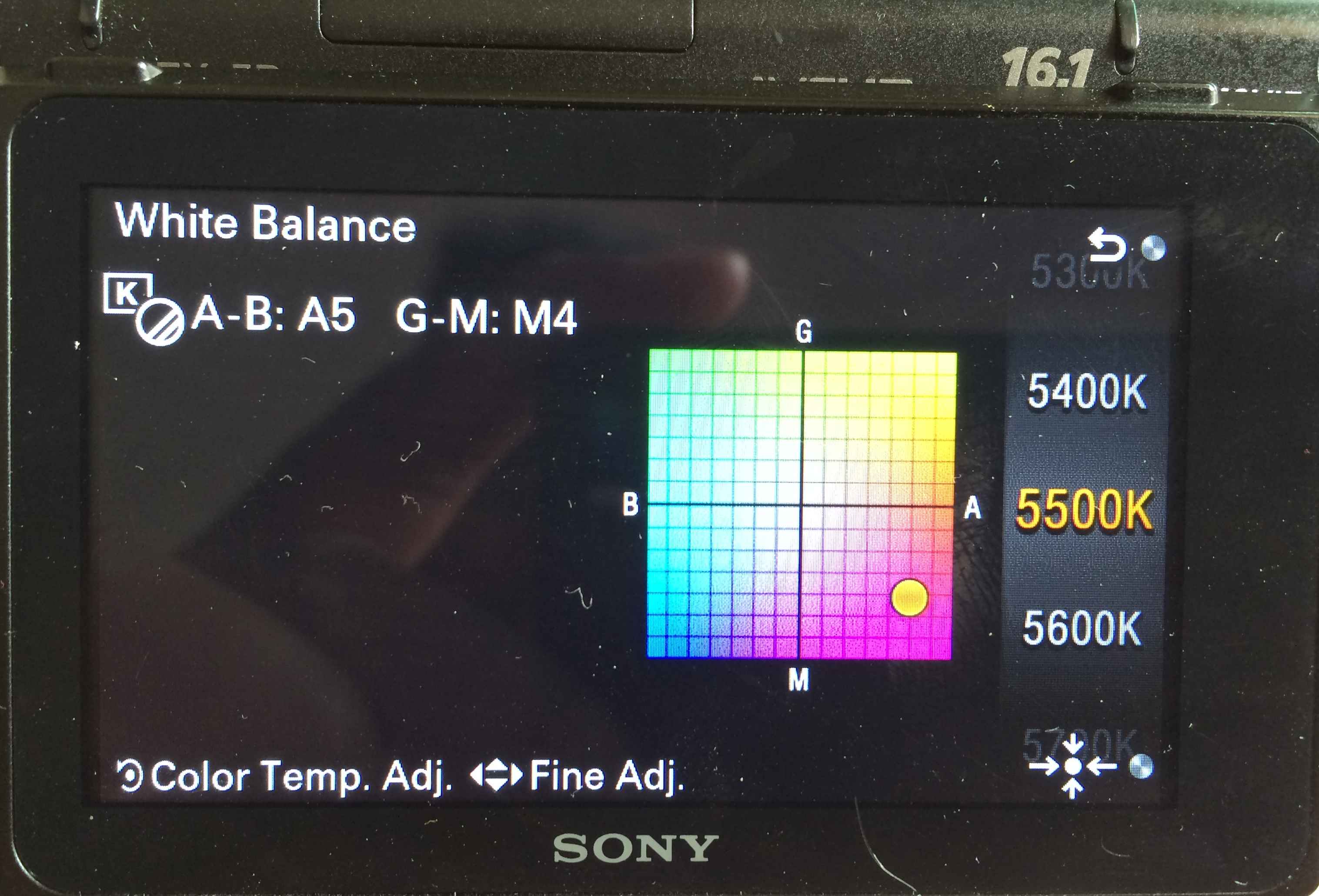 First, where are there three components? Two should be enough to represent any color.

Second, How do I map these to Lightroom? In other words, how should I set Lightroom's Temp and Tint sliders to correspond to the same white balance settings as 5500K, A-B: A5, G-M: M4, in this example? I've set LR's Temp slider to 5500K, but what do I set its Tint slider to?

The overall answer to your question: The system used by most digital cameras is based on the way color was fine-tuned in the film era. The color temperature setting corresponds to the film selected, and the AB and GM settings correspond to bias introduced by color conversion filters used during shooting or color compensating filters used during printing to fine tune the color of a particular film to a specific light source.

Since the color gamut your camera is capable of reproducing is two dimensional one might tend to thing you would only need two axes to express a particular wavelength and intensity of light.

But consider that most light your camera records is not a single, pure color at only one wavelength. It is rather a combination of many wavelengths. Since the human eye is particularly sensitive to three colors of light (red, green, and blue) and our brains use the comparative intensity of those three colors to express the color of everything we see, cameras have typically followed suit. Both color film and digital photography technologies almost exclusively use the combined intensity of red, green, and blue light in a particular light source to designate the color of the light.

The A <--> B axis on your camera is a fine tune version of the Color Temperature control. Say you want to use a color temperature setting of exactly 5550K. Your camera only allows you to select either 5500K or 5600K via the color temperature control. You can either select 5500K and then dial in some "A" (amber) to warm it slightly or you could select 5600K and dial in a little "B" to cool it slightly. The G <--> M axis on your camera corresponds to the tint control in Lightroom.

So exactly what color temperature and how much tint you would need to set in LR to correspond to an in camera setting of 5500K, +5 (AB), -4 (GM)? Since there is no precise standard amount of bias for each unit you would need to experiment to find the closest match. The +/- 1 amount of bias applied in most of my Canon cameras is loosely based on the amount of bias provided by a 5 mired color conversion filter or color compensating filter. These were filters used in the days of film to fine tune a particular film to a specific lighting source.

In reality I don't see a particular need to know the exact correspondence between the in-camera and Lightroom settings:

How do I map these to Lightroom

The scales between Lr and camera are usually different. If a camera is set to some colour temperature for white balance, Lr reads it slightly differently. Same with the tint (amber-blue), and there is no guarantee that changing AB setting in the camera results in a proportional change in the tint in Lr.

Not the answer you're looking for? Browse other questions tagged white-balance sony-nex lightroom-5 or ask your own question.

20
What is the function of the tint slider in Lightroom?
10
Are paler raw images normal for a newer sensor with higher dynamic range?
1
nikon d810 manual WB is not the same as "As Shot" in Lightroom

5
How does white-balance synchronisation work in Lightroom?
14
How to set tint if one is colour blind?
0
What's the difference between Sony NEX 5R and NEX 5T?
7
How do I accurately capture the colour of sunlight on a wall?
1
How do I measure the correlated color temperature of a light source with a DSLR without a gray card?
5
Is there a way to set white balance of a RAW to match the preview JPEG?
2
Accurate Product Images: Gray Point, White Point, Black Point
0
How do I remove these purple color casts in RAWs of a really dark scene?
3
Can't get the right colors when shooting art. Looks pale even with ColorChecker Passport
1
Appropriate White-Balance Settings for Sunsets