What to look for in a compact camera to take picture of black dog?

I like to take snapshots of my black dog during hikes and have grown annoyed at my camera. The changing light conditions and his movements force me to use the automatic sport mode, which often underexposes him. The light metering seems to always be more interested in the background than the black spot in the middle of the picture. Is there a compact camera that does especially well under these conditions? Or is there some feature or measure I should watch out for?

The picture was taken with a Canon EOS 500D, but besides not allowing modifications to the automatic modes it is also too big to carry along on each hike. 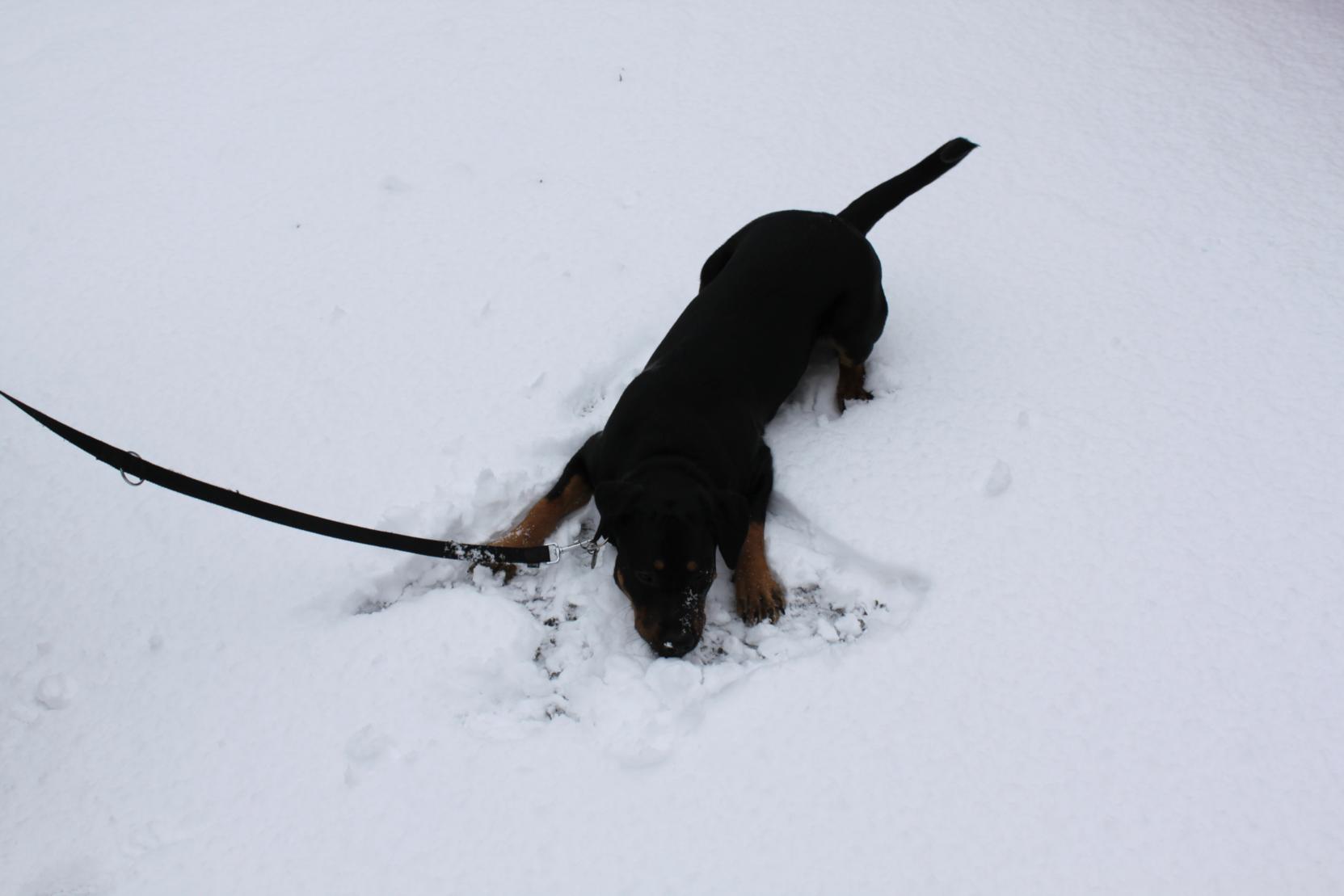 The problem with the photo is that the image is under exposed. The camera's meter tries to make everything an 18% gray and, well, that snow looks about an 18% gray to me so the meter was working 'correctly'.

There are a couple different options to look for with this. The first is to find a camera that has a snow or beach mode. An example of what this can do will can be found on Adorma's tutorials. You'll need to look at the scene settings for a particular camera to see if it has something appropriate for that.

Another option is, instead of letting the camera do the work, get one with a bit more advanced manual controls which allow for exposure compensation. Playing with a set of cameras available on DPReview and their camera feature search - compact with full manual and exposure compensation +/-2. These cameras would allow you to be able to specify the exact settings you are after to properly expose the snow.

When taking the photograph, you will likely want to turn on the histogram viewing, if it is available. This would allow you to see if the image is blown out or not... or if it is possible to capture the scene properly (too much dynamic range for the camera).

If worst comes to worst, expose for the dog (spot meter... maybe get an 18% gray collar you can meter against). You can always correct the snow in post production, but details lost in the dog are lost - and thats what you really want to photograph.

It would help if you said which camera model you're currently using, since different compact cameras (even from the same era, manufacturer and price range) can have wildly different feature sets. That said, let me list a couple of options that you're fairly likely to have available.

As other answers have noted, you camera may have a "snow mode" that tries to measure the exposure correctly for scenes with a lot of white in the background. Mine, at least, also allows exposure adjustment in this mode, so you can adjust the results of the automatic exposure measurement if they're still darker (or brighter) than you'd like.

Another option is to shoot in P mode, which your camera almost certainly supports. This should allow exposure adjustment, and you should be able to mimic "sports mode" by choosing a reasonably high ISO setting. If your camera lets you adjust the aperture or shutter speed, you can also set a fast shutter speed and/or a wide aperture (which, for a given ISO and exposure, imply each other).

Your camera may also have an option to enable spot metering, which causes the camera to auto-expose the image based on just the spot in the middle of the image frame, rather than on the entire image. (My low-end Canon compact has it hidden behind the "menu" button, but it's there.) As noted in the other answers, though, this can lead to overexposed images when shooting a dark subject like a black dog. You may be able to get decent results by aiming the camera just off the subject, so that the metering spot falls partly in the snow and partly on the subject, but that can get quite tricky.

Finally, since you say your camera is a Canon, you might want to give CHDK a try. It's a free alternative firmware for Canon compact cameras that adds a bunch of features more commonly associated with high-end models or DSLRs, such as manual exposure controls and, notably, the ability to save RAW photos.

The reason you'd want to save your photos in RAW instead of JPEG format is that it lets you adjust the exposure (and many other things, like color saturation) on your computer after taking the shot. Of course, you could do this with JPEG files in Photoshop (or GIMP or any other image editor) too, but due to the lossy compression and limited dynamic range of the JPEG format, trying to brighten a JPEG file too much tends to reveal ugly artifacts and noise. A RAW image file preserves the full dynamic range of the camera sensor (which, even on low-end cameras, is a lot better than what JPEG can store) and does not apply any lossy compression, so it's a much better choice for post-processing.

(In fact, when I shoot snowy scenes with my DSLR, I always deliberately underexpose the shots so that the snow doesn't burn out. That way, I can later push up the exposure in UFRaw in "soft highlights" mode, and maybe apply a bit of manual curves correction, to get a nice snowy background instead of just ugly saturated white.)

The major down side of CHDK is that it can have a much steeper learning curve than your camera's normal user interface, and even just getting it set up can take some learning. That said, if you want to do stuff like shoot RAW without spending money on a new high-end camera, CHDK is definitely the way to go.

Ps. Even if you're shooting JPEG, you can still do quite a lot with curves adjustment. For example, here's what got with a few minutes in GIMP: 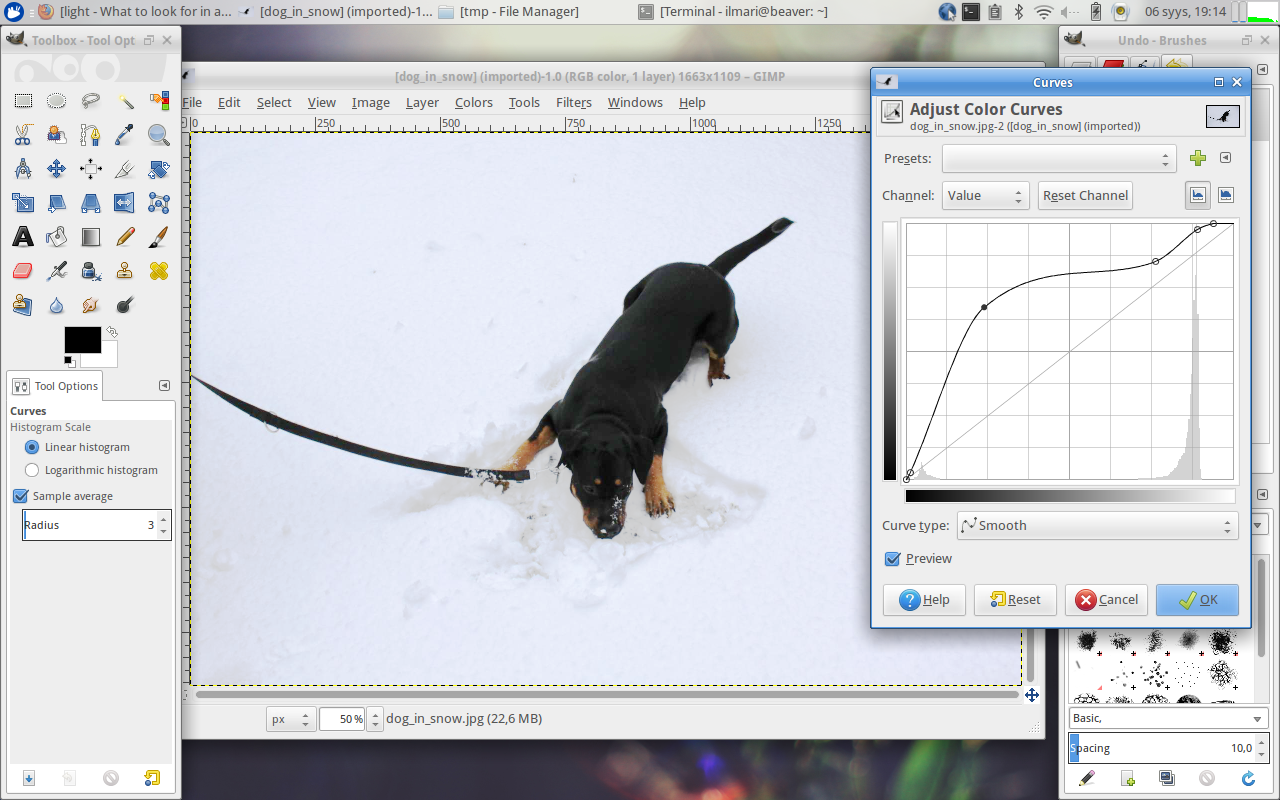 This isn't so much about camera features as it is knowing how a camera's autoexposure system works. A P&S will screw up in the same way your dSLR did on these shots if you just set everything to auto and bang away.

The feature you want is spot metering, and it's very common on P&S cameras and works pretty much as it does on your dSLR. Even the Canon Powershot A series has this. My S90 certainly does. But you have to be out of the scene modes (like sports), and into at least P (programmable auto mode) to have access to it. Ideally, you probably want the "PSAM" modes (P, Av, Tv, and M on a Canon Powershot), but the lower-end compacts may or may not have them, while the higher-end (S, SX, and G) models typically do.

In the shooting menu, look for an icon with frame lines. The three common settings are Evaluative, Center-Weighted, and Spot. 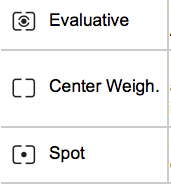 Using spot exposure, and placing the AF spot over the dog would mean that only that small area would be metered for the exposure. And then you might have the opposite problem of overexposure because you have a black dog. :)

When the camera meters a scene, before setting the exposure settings, it makes the assumption that overall, everything will average out to 18% gray. So, for simplicity's sake, let's say it takes the average value of the entire scene, then sets the exposure so that average comes in at 18% gray. Works great for a lot of things. But with snow or at the beach, when that "average" is actually much brighter than 18% gray, you get underexposure. With a night-time scene or shooting in a coal mine, when your "average" is actually much darker than 18% gray, you get overexposure.

Center-weighted might help. Learning to read the histogram and having full-manual mode would probably help even more. But the simplest thing to do is be in P mode, use center-weighted or spot metering, and then when you look at the preview on the back of your camera and (assuming the exposure simulation in liveview is working) just adjust the compensation to let in more or less light until your preview looks good. Then take the picture.

Compacts often have a "beach and snow" sub-setting, which may help in this case. The problem is that snow and sand are highly reflective, so the averages that the camera uses in auto mode tend to blow things out.

Spot metering is what you want, but I don't know if any reasonable priced compacts have it.

For a specific compact that allows:

I cannot praise the Panasonic Lumix DMC-TZ60 enough, there is even a viewfinder for those occasions when you can't see the screen because of bright sunlight. At 240g (inc. Battery & SD card) and 110.6 x 64.3 x 34.4 mm when switched off you can carry it with you all the time, (as I do). If you are looking for something a little cheaper you could pick up one of the earlier models in the series.

Go to http://www.dpreview.com/reviews/canoneos500d Your camera has spot metering, exposure compensation, Raw formats, etc. Suggest you go to a good camera store and ask for lessons or join a camera club. Read your manual and try different settings. You have much more than a "point and shoot". Use it.

Not the answer you're looking for? Browse other questions tagged light compact-cameras exposure-compensation or ask your own question.