What causes the glitter/texture in bokeh?

I have been looking for a technical explanation for the glitter/texture sometimes appearing in bokeh, usually when you have light coming through a object that scatters light like glass. I am of cause talking about the texture not coming from the lens itself such as onion rings and dust but the texture from the incoming light.

What causes this effect and what is the texture coming from? 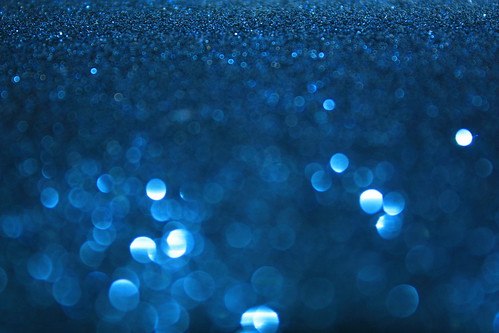 These circles are defocused images of small bright points. You can make a test with a led diode or another point light source. Focus far behind it and with the same lens and aperture you should see similar circle, but just one.

The actual look of these circles depends on the lens design. They are pretty much rounded here, which suggests that the lens was either wide open (no aperture blades in the way) or that the aperture in the lens has rounded blades. The ratio of brightness in center vs. edges of these blur circles depends on level of aberration corrections in the lens. Under or over corrected lenses tend to have uneven brightness in the circles, for example patches behind the focusing plane on pictures taken with lens that suffers from spherical aberration has these patches bright in the center, but dissolving towards the edges. The same lens would have circles that are brighter at the edges with blur in front of the focusing plane. Evenly lit circles would be characteristic for well corrected lenses, even though, paradoxically, this can create some not so great bokeh under certain circumstances... The fact that the shape of the blur patches does not appear circular is likely due to optical vignetting - some of the light is physically obscured by parts of the lens or the camera chamber. The effect is sometimes called cat's eye.

When the aperture is wide open light enters from many different angles and since the subject is reflective and based on the texture of the reflective medium you get to see this effect. check this and this link for the physics behind the aperture and blur. Hope this helps

Bokeh describes the feel or nature of the out of focus areas of an image. The actual look of the bokeh circles are due to spherical abberation in the lens -- the cones of light that are not pinpoints are rendered as circles or shapes. And those shapes range from super sharp circles (as they would be for a theoretically perfect lens) to artistically blurry in a variety of ways.

To complicate things the shapes are often rendered with diffraction patterns around them, especially at smaller apertures.

Ignoring diffraction for a moment, what we are seeing is the imperfect rendering of the cones of light reaching the film or sensor at a plane that is not at the finest point. Zeiss used to have a paper out there that described the math in detail, which had something to do with retangular intensity distribution.

Artistically, I suppose we would want a distribution that is more gaussian, and we sort of approach that feeling when the circles of light are less perfectly rendered, and are more blurry.

Of course, we've all seen the 5- or 6-sided bokeh blurs that are used a lot in commercial imagery. I guess the 5-side fans want us to think they are shooting Mamiya lenses, as the shape has to do with the aperture diaphragm blades. Odd numbers of blades are used so that intensely lit bokeh will diffract into double sided shapes and lovely star-shapes. I suspect more than one glamour or product photog has used this to their advantage when selling bikinis or suntan lotion.

This high-key diffraction is what I suspect causes the glitter/glow effect you mention.

Some lenses use more blades and/or curved blades to make the bokeh more round and pleasant.

I'm pretty sure that this effect is, in fact, caused by sparkles.

OK, let's unpack that a bit. A glittery surface sparkles because it consists of lots of little reflective facets (or pieces of transparent refractive material) that each reflect incoming light (e.g. from the sun) in a random direction:

These reflected light rays form a large number of very narrow beams, each reflecting off a single facet. When one of these beams happens to hit your eye (or the sensor of your camera), it appears as a small bright spot — a sparkle.

(Note: The diagram above is actually subtly wrong, but it illustrates the principle. As an exercise, you may want to try drawing the light rays more accurately, preferably starting from the focus and including an actual light source of limited angular size, to see what's really going on. Then think about why this "fake" diagram, which is essentially drawn starting from the reflected beam, predicts the correct result, even though at least one of the refraction angles is wrong.)

Basically, the effect that creates these uneven bokeh circles is the same as what causes the individual sparkles on a glittery surface to appear and disappear as you move your head — the beams of light forming the sparkles are narrow, so they can only be seen from certain vantage points. Your lens aperture is wide enough that, sometimes, only part of your lens "sees" the sparkle, while the other parts just see a dull facet that reflects nothing particularly bright.

Not the answer you're looking for? Browse other questions tagged bokeh texture or ask your own question.

4
How can you show texture?
8
How do I chose a good camera for texture hunting?
1
How to remove texture from old scanned photos?
1
How can I bring out the texture and sheen on a model's clothing?
0
Crash course on photography for 3d rendering texture
1
What causes this 'bokeh crop' effect?
1
What is the name of this texture/where can I find it?
8
What texture is used in this photo?