I've been a happy Canon user for a while. When I was doing my initial research on what brand to buy several years ago, I came to the conclusion that both Nikon and Canon are equally good (which I think is mostly true too).

However, I spent some time on DxOMark and noticed that the overall score (and also the portrait, landscape and low-light ISO scores individually) have been significantly higher for Nikon cameras than Canon ones after 2010. This plot illustrates the difference (I edited the screenshots so that Nikon points are red and Canon ones are blue): 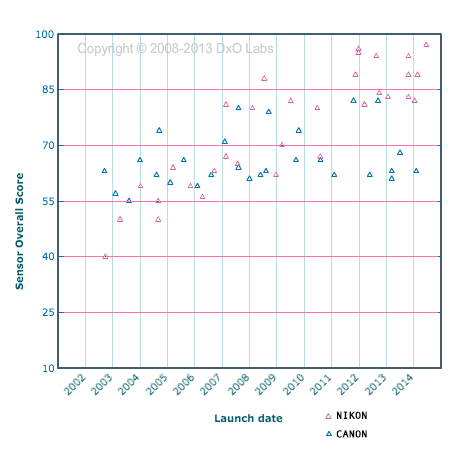 Does it mean that as of now, it's better to buy Nikon SLRs than Canon? Or are these scores not trustworthy enough? Thoughts?

PS: I don't intend to start another Canon-Nikon fanboy war. Objectivity would be appreciated!

The DxO Mark scores are misleading, but that doesn't mean the gap in performance isn't real!

Several Nikon bodies (D800, D600 many of the D3xxx and D5xxx series) are using Sony Exmor sensors which feature a cutting edge ADC/read noise reduction system to achieve massive gains in dynamic range compared to Canon sensors, which are designed and fabricated in house.

This is reflected in the DXO "landscape" score, but is better demonstrated by looking at the dynamic range graph:

As you can see the gap in dynamic range disappears after ISO800, this is where it moves from being read-noise limited (where the D810 is significantly better) to being photon-noise limited, where both cameras perform similarly as photon noise depends mainly on how many photons you capture, which is determined by sensor area.

The DxO low light score is massively skewed towards the Nikon camera as it considers colour accuracy as well as noise. Canon colour accuracy is slightly lower due to a design decision to optimise for sensitivity and performance under flourescent lights. The signal to noise ratio graphs tell a more accurate story:

The measured results are very close, which is exactly what you'd expect if noise is photon limited since two sensors of equal size will capture the same number of photons. Signal to noise ratio isn't the only concern and people will often qualitatively pick one over the other. But the fact remains low light noise performance is similar.

What is not similar nor open to interpretation is the gulf in shadow noise at low ISO. Canon are invested in sensor production so lack the ability to "shop around" for the best model, so it's unclear when they will be in a position to turn the situation around. Low ISO dynamic range is just one on many factors that make a good sensor (or camera) but if it is important to you then it may be worthwhile switching, as Canon have not moved on this front for quite a few years now, they are either unable to improve (due to manufacturing limitations or patent issues) or don't regard it as a priority (or both).

Photography is about the whole package, not just the imager performance but also the user interface, mechanical design, lenses and accessories etc. For example STM lenses (Canon) or integrated wireless TTL capabilities (Nikons always had them but they're quite new to Canon.) This answer will only offer some context in the process and production of Canon and Nikon that may be relevant. How relevant are the DxOMark scores and tests? provides a good critique of DxOMark's process and scoring.

This article (caution: technical content) from ChipWorks tells a significant part of the story from around the time when Nikon seem to have made a step change in their sensors.

The main technical difference appears to be that Nikon are using a much smaller fabrication process for their sensors than Canon is. The Sony sensors that Nikon use have come from their 0.25µm and 0.18µm foundries. Nikon also use Renesas/TSMC's 0.25/0.35µm for their own designs. Whereas Canon's in-house facilities are working to a 0.50µm process. Nikon's smaller processes allow for more detailed parts. This is a significant benefit from Nikon's decision to use outside foundries who produce at higher volumes and can afford a much bigger investment in infrastructure and equipment.

The article mentions that Canon have a 0.18µm facility but their other reports on newer Canon sensors aren't public (I'd expect that if they had moved to it that there would be more industry news.)

TL;DR Canon and Nikon (with Sony's help) appear to be playing leapfrog, don't expect the past to be any indicator of the future.

DXOMark scores are pretty problematic - they measure several aspects of the sensor, in low light on a heavily down-sampled image, then derive all sort of numbers from those measurements and then calculate a single score weighting all those numbers differently.

The reason Nikon looks better than Canon is that the Sony sensors Nikon are using have less noise in low light (especially when you downsize the image to 5 megapixels) and the DXOMark is heavily biased to low light noise performance.

So, if what you want is the cleanest raw files when you shoot in low light and downsize to 5 megapixels the DXOMark score apply to you - if you on the other hand you want good looking pictures you shouldn't really give the DXOMark score much weight.

As this graph shows, the main differences between Canon and Nikon(Sony) sensors only really show up at low ISO: 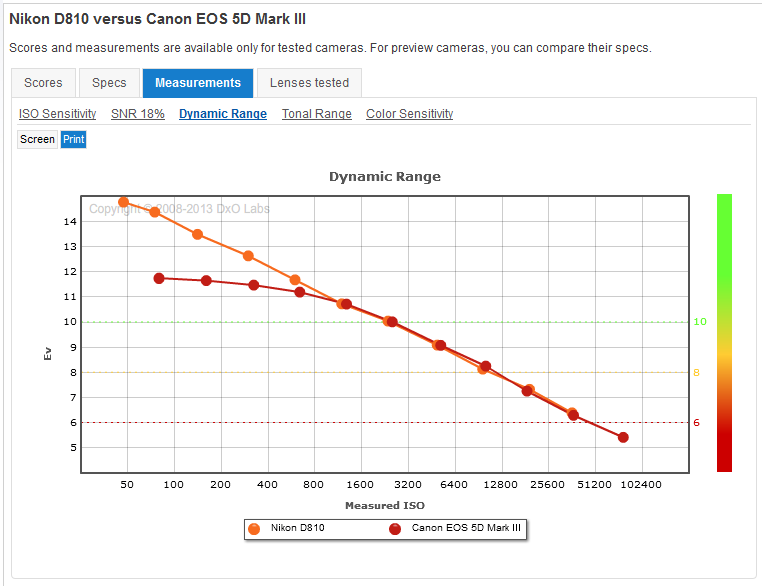 but at low ISO you can't really see the difference, not without post processing a RAW file.

Here is the best post i could find demonstrating this (big) difference: Nikon DX vs Canon APS-C

Now this difference will not matter to a lot of people (or a lot of cases) and you can kinda get around it by shooting 3 bracketed exposures with Canon cameras and combining them into a HDR photo. I don't know about you but only shooting 1 with Nikons sounds a lot better to me and in some cases you simply can't shoot an HDR photo of something (like fireworks for example)

Also because of Canons nasty crosshatch patterned noise you can't push the RAW file as far as you can with the Nikon, which count towards the Dynamic Range difference.

Now again, this may not affect you in the slightest, specially if you shoot in controlled light situations like studio photography, or if you shoot JPG's (or don't process your raws)

I, on the other hand, regret not buying a Nikon (or better said a Sony sensor equipped camera) every time i sit down to edit my photos.

Take a look at DSoMark's comparison of the low light performance of the D800 and then the 5D Mark iii. The D800 is clearly the better camera in low light according to this (by a mile)...

Then go look at this real world test that looks at the actual noise performance in low light for a real world situation. Hmm, that's funny, the 5D mark iii looks clearer than the D800. (Yes, it is an in-camera jpeg test, but it still demonstrates that with the basic processing that both cameras do, there is little to no noticeable difference.)

Lab tests are only good for so much and DXoMark's scores oversimplify and lose the truth. The fact is that cameras are complex systems with many relative strengths and weaknesses. Don't look at the overall scores on DXoMark, but rather use the more specific stats as a guideline and then look at real world tests to see how they handle situations similar to what you will do with it. Then consider the strengths and weaknesses of the lens system, form factor, interfaces and price and decide what is worth it to you.

The two brands are close enough that there isn't a right or wrong answer. There are certainly certain situations where one does clearly have an image quality advantage for a particular model (for example, the D800 is far better than the 5D mark iii for ultra high quality B/W portraits), but for general use, they are both right in line with each other overall. (Personally, I went with the 5D Mark iii over the D800 because of low light performance and familiarity with the interface as well as the ability to use Magic Lantern with it.)

The criticism of DxOmark's overall score as a "Faux statistic" is valid, but even looking at the individual items that they measure is not very useful.

Neither Canon nor Nikon makes any genuinely bad cameras, and that includes their entry-level DSLRs and compacts.

Worrying about these differences is like trying to decide between two family cars on the basis of relative top speeds of 160 mph and 180 mph respectively.

I don't even know how they can decide on a maximum usable ISO, as so much depends on the nature of the lighting and the detail and colours of the subject. Sometimes you can shoot at 6400 and it looks fine. At others ISO 800 will look awful. And then there is the effect of post-processing. LightRoom's basic rendering (which includes de-mosaicing) makes images look much noiser than does, for example, PhotoNinja.

If you know that you really need 14 stops of DR at ISO 100 then you must choose Nikon. But if you were that much of an expert you would not be asking here.

Do you really need 14 stops? We coped for decades with no more than 6 or 7 stops of DR with films like Fuji Velvia. In that context Canons 11+ stops is already a huge luxury.

If you are going to compare sensors in terms of things like signal to noise, dynamic range, and color depth at various ISO settings (the three main categories DxOMark grades on) and use that to compare the sensor technology between Nikon (Sony) and Canon, you HAVE to compare apples to apples.

The primary factor in terms of signal to noise regardless of all of the advances that have been made in micro-lens technology and electronics advances that reduce read noise, is still the pixel pitch.

The fact that the 36MP Nikon D810 actually performs on par with the Canon 5D Mk iii in terms of signal to noise ratio at higher ISO in itself speaks to the efficiencies of the Sony sensor technology....and of course in terms of dynamic range and color depth, the Nikon (Sony) sensors are clearly better across the board.

With that being said, there's much more to a camera than just the sensor and overall image quality.

In terms of features such as AF points, larger buffers and higher continuous frame rates, Canon is significantly better than Nikon at nearly every price point.

Not the answer you're looking for? Browse other questions tagged canon nikon sensor or ask your own question.

69
Is there any significant difference between Nikon and Canon?
13
How relevant are the DxOMark scores and tests?
4
Will switching from Canon to Nikon as a way to improve image quality make my stock images saleable?

12
Are the sensors of newer DSLRs better beyond just having more MP?
4
What lens should I get with a Canon 7D for portrait use?
25
Why are larger sensors better at low light?
4
How to show Sony NEX F3 image quality is better than Nikon 1 J1?
5
How linear are DSLR sensors?
4
Will Canon's EF and EF-S lenses work better for Canon's mirrorless cameras than mirrorless cameras from other brands?
0
Is the Canon G3X sensor larger than the sensor in Canon's G16?