I will be going to Road Atlanta in late Sept. early Oct for the 10 Hour Petit Le Mans. The race will begin during daylight hours and run into the night. I have never shot at night, or minimal experience. I have a Sony A65 with 2 lens. A 3.5-5.6/18-55 SAM and a 4.5-5.6/75-300 lens. I do not have an external flash either. I have shot blurred background pics during races and typically use auto focus for a specific location, and turn manual focus on. Wait for the car to get into the range/focus point and shoot adjusting the shutter speed to 80. What should I adjust as far a aperture etc. to get a good shot at night?

Thanks for any advice that is offered

During your daylight shooting for the race, both the lenses would be fine, and you won't need any external flash as well. At night try focal lengths accordingly; see that the shutter speed, F/number and ISO matches the best to desired focal length. Let's say for example, you are shooting at your mid-range focal length of 18-55mm. That would be 24mm or around 35mm. Match the shutter speed with your desired Focal length, or double the shutter speed, in order to get sharp details. Also check the sweet spot of your lens aperture. My kit lens EF-18-55mm sweet spot at 18mm is F/3.5 and on 35mm is F/5.6. Also keep a check on ISO counts. The lower the ISO, the more grain-free details you get. ISO 800/1600 is fine but above 3500 grains can be seen no matter how costly your gear is. Or else you can try aperture-priority mode. First check if your camera has that option,if yes, choose the widest aperture and let the camera do the rest of the work. Be bold to be steady with hand hold. Secondly longer focal length lenses won't help you much during night photography. I suggest you trust your kit lens by getting close to your subject. All the best and happy clicking. 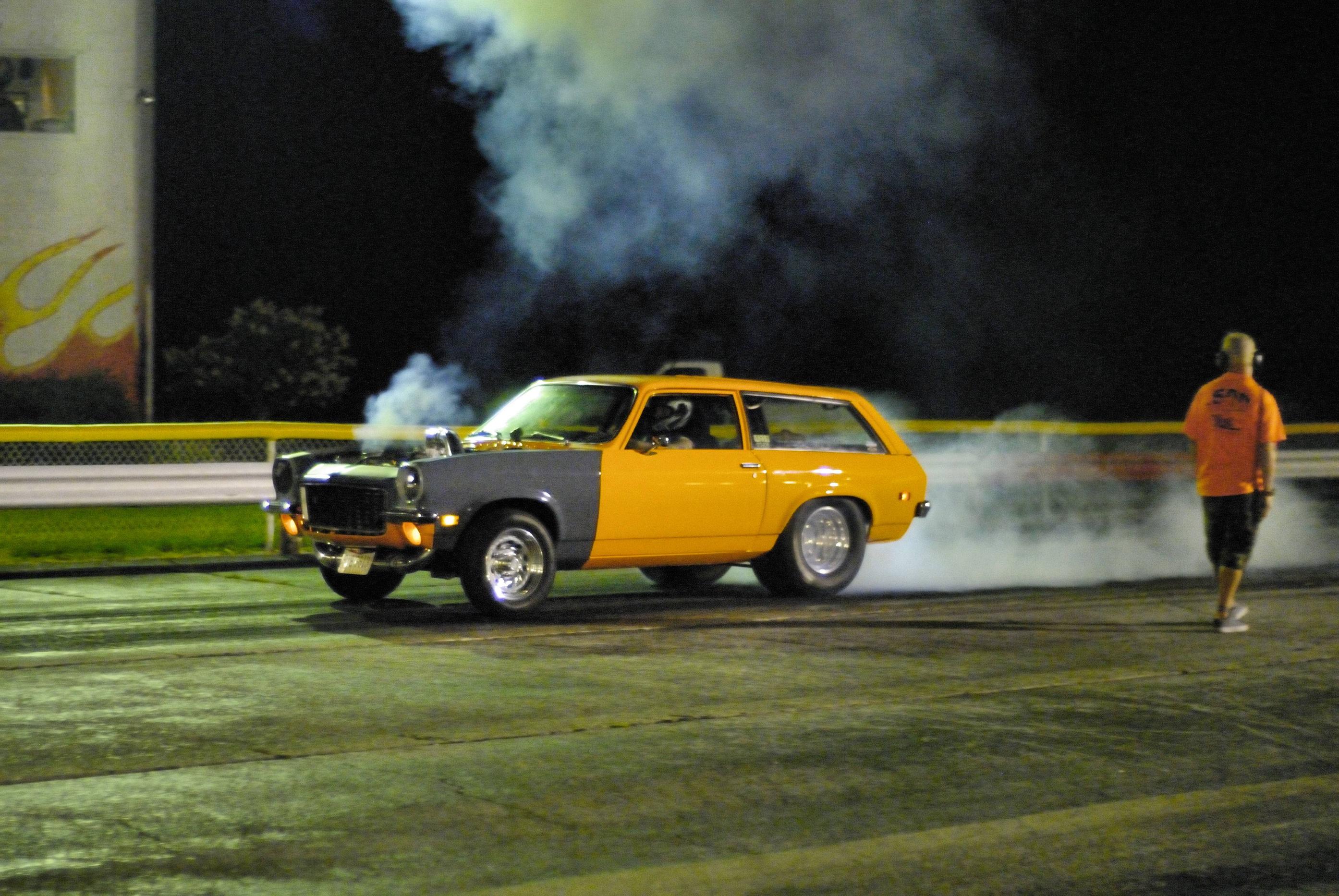 Even though this is an old post and after reading the answers without any images to back up what is being said, I know there are people out here who might stumble on this very same question.

I am posting in hopes to help a newbi who might be wondering how to photograph a moving subject at night.

A 18-55 kit lens on a foot ball field with awesome lighting might work but most racing of cars the lighting is horrible plus the asphalt and or concrete will reflect the cars color, Sadly we all forget that before digital cameras we had to use high iso/asa films to get usable night shots of any race cars racing at night, even during the day most race car photographers used high iso/asa film.

This high iso/asa film left a grainy image as do our aps-c/full frame sized cameras do. Even full frame digital cameras have grain at high iso/asa speeds. Nothing wrong with that at all. It adds a depth to the images that has long since been forgotten. look at any old hot rod or car magazine and notice the grainy images that were the norm.

I shoot night race cars all the time between iso3200 and 6400 with a 50mm 1.8 lens at f1.8, the problem is the reflection of the cars color saturates the image, as our CCD/CMOS sensors are so sensitive to light the images do become washed out with the cars color. (if the car is yellow the concrete will have a yellow cast of color) I found that shooting with the saturation set to a (-) or all the way down will help minimize this effect.

Also start learning how to pan the camera with the car, I pan just a little bit faster than the car to yield a motion effect while still retaining the details.

Good luck on shooting. All images shot with a Nikon D200 hand held at f1.8 One other thing I have not herd anyone mention is that lower megapixel cameras absorb light better than high megapixel cameras do in part to the pixels being bigger and allowing more light in plus a fast prime lens 1.4/1.8. will get the job done.

"If your looking for real unedited images that is." I also hate editing or edited fake looking images my self. 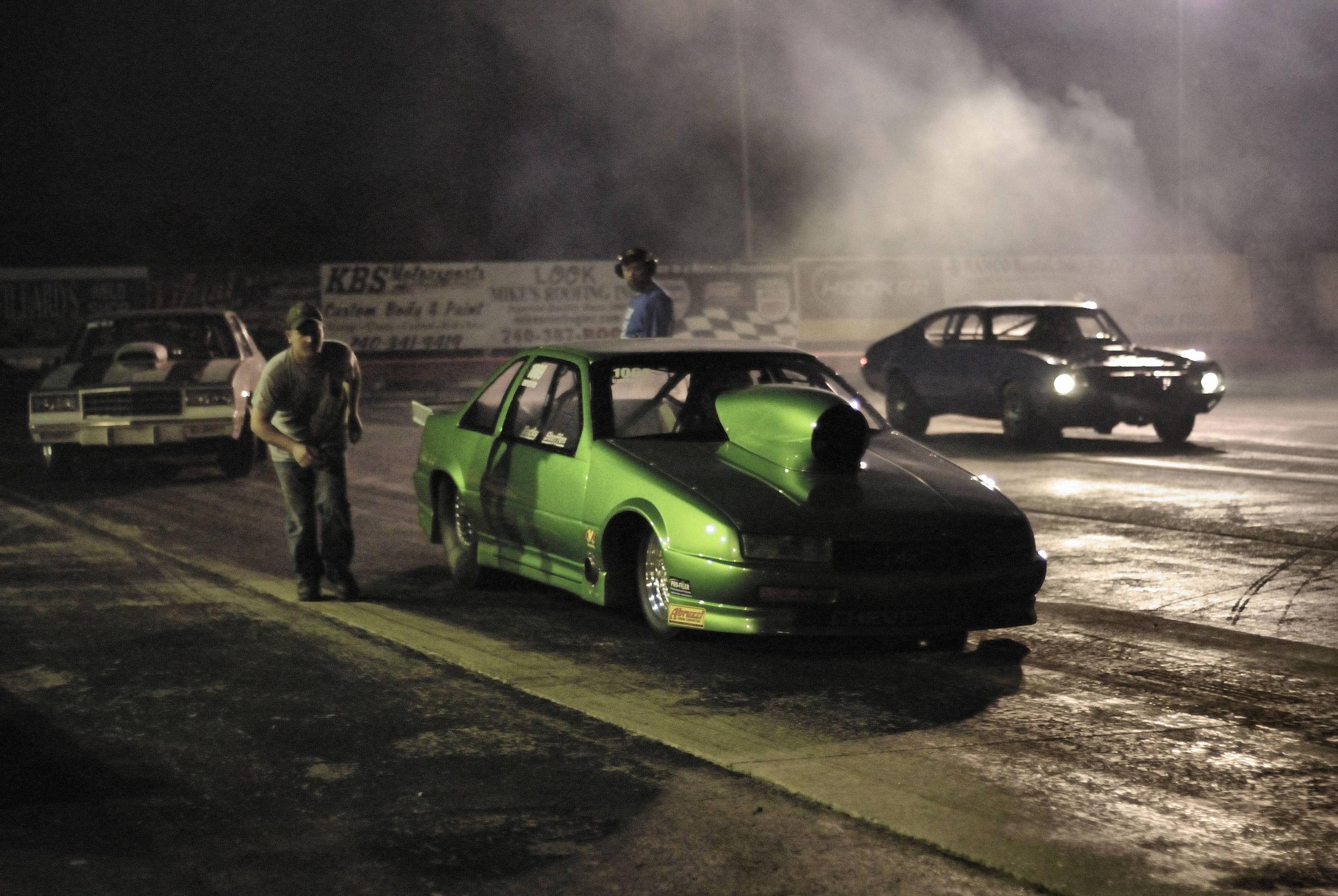 With night shooting, you typically need more light for a good exposure, so you'd actually want different lenses--ones with a larger maximum aperture so you could open up the aperture setting (use a smaller f-number) to gather more light, a higher ISO setting, or a slower shutter speed. When you're at 1/80s, though, you can't really go much farther down or you'll risk too much motion blur--especially with a panning shot--to get a clear shot of the car.

However. Since (from a quick spin on the website), the Petite Le Mans is a track race, chances are good when night falls, a lot of lights will come on, and that might give you more of a fighting chance--particularly if you increase your iso setting. You could still be up against it, though. Indoor and night time sports photography are two of the most demanding subjects when it comes to gear, because you generally need a lens that's long and fast, and while either can cost, in combination, the cost goes to a whole 'nother level. Maybe consider renting a 70-200/2.8 lens if you think that'll be enough reach.

You should not use flash (on-camera or external). Unless you're at high ISO, it's not likely to be effective anyway, and it's likely to be a nuisance to the drivers if you're close to the track, and to your fellow spectators regardless of where you are.

Not the answer you're looking for? Browse other questions tagged low-light sports night or ask your own question.