In what way does the lens mount limit the maximum possible aperture of a lens?

In many answers to questions about different aspects of really large aperture lenses it's pointed out that the lens mount sets a hard limit on the maximum possible aperture of the lenses to that camera (for example here and here). This may very well be true, but I can't really visualise the reason to it.

As I see it the limitation has to do with the opening physically blocking the light. I've made a drawing to demonstrate this: 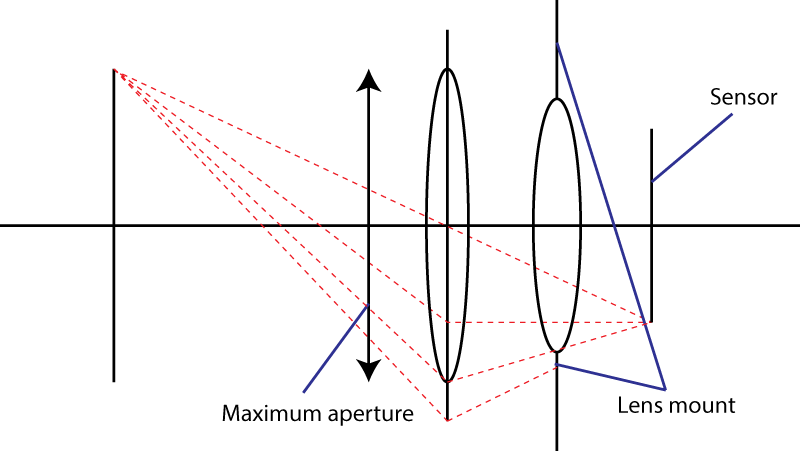 The bottom ray strikes the lens mount and can't get to the sensor. The maximum aperture is in this case limited by the size of the lens mount.

This shouldn't be a problem though since complex optics (that camera lenses are) can allow the system to converge the light rays in a plane in front of the image plane and then use a diverging (negative) lens to move the plane of focus back to the sensor/film plane without having the light interfering with the walls of the lens mount.

The following drawing uses this diverging lens and by doing so increases the maximum aperture possible despite the fact that the lens mount stays the same: 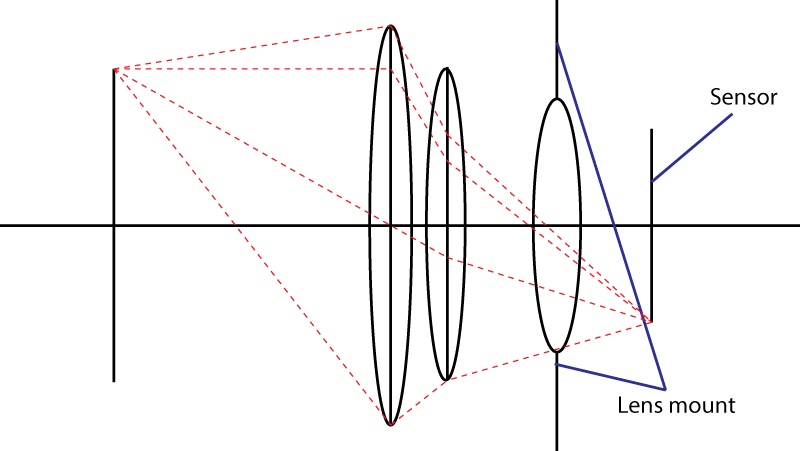 This is possible as long as you're not close to the physical hard limit set by refractive index. Very short focal length lenses deal with this problem all the time and I can't believe this is the reason that the lens mount acts as a hard limit of the maximum aperture.

It could also be the fact that the corrective elements required when the aperture gets too large degrades the quality too much or gets too expensive. This does not set a hard limit though, but rather a soft limit due to compromises.

Is there something I've missed? Is there really a hard limit set by the mount regarding the maximum possible aperture of a lens-camera system? If there is a limit, what is causing it?

There are two hard limits on how fast a lens can be:

The first is a thermodynamic limit. If you could make a lens arbitrarily fast, then you could point it to the sun and use it to heat your sensor (not a good idea). If you then get your sensor hotter than the surface of the Sun, you are violating the second law of thermodynamics.

This sets a hard limit at f/0.5, which can be derived from the conservation of etendue. Well, technically it's more like T/0.5. You can make lenses with f-numbers smaller than 0.5, but they will not be as fast as their f-numbers suggest: either they will work only at macro distances (with “effective” f-numbers larger than 0.5), or they will be so aberrated as to be useless for photography (like some lenses used to focus laser beams, which can only reliably focus a point at infinity on axis).

The second limit is the mount. This limits the angle of the light cone hitting the sensor. Your trick of using a diverging element dos not work. You certainly get a wider entrance pupil, but then you have a lens combination which has a longer focal length than the initial lens. Actually, your trick is very popular: it’s called a “telephoto” design. Bigger lens, same f-number.

If the lens mount allows for a maximum angle α for the light cone, then the fastest lens you can get will have an f-number equal to

or, equivalently, N = 1/(2×NA), where NA is the numerical aperture. This formula also shows the hard limit at 0.5: sin(α/2) cannot be larger than 1. Oh, BTW, if you try to derive this formula using small-angle approximations, you will get a tangent instead of a sine. Small-angle approximations are not good for very fast lenses: you should use the Abbe sine condition instead.

The same caveat about f-numbers v.s. T-numbers applies to this second limit. You can get a lens with an f-number smaller than 1/(2×sin(α/2)), but it will work as macro-only, and the bellows-corrected f-number will still be larger than the limit.

This section, added on Nov. 26, is intended for the mathematically inclined. Feel free to ignore it, as the relevant results are already stated above.

Here I assume that we use a lossless lens (i.e. it conserves luminance) to focus the light of an object of uniform luminance L into an image plane. The lens is surrounded by air (index 1), and we look at the light falling on an infinitesimal area dS about, and perpendicular to, the optical axis. This light lies inside a cone of opening α. We want to compute the illuminance delivered by the lens on dS.

In the figure below, the marginal rays, in green, define the light cone with opening α, while the chief rays, in red, define the target area dS. 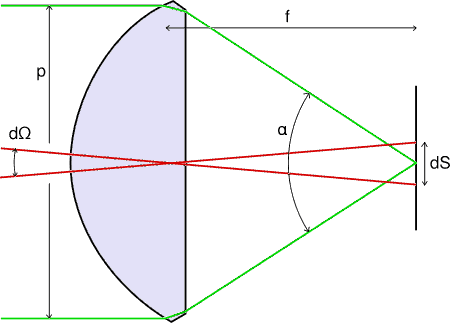 The etendue of the light beam illuminating dS is

where dω is an infinitesimal solid angle, and the integral is over θ ∈ [0, α/2]. The integral can be computed as

The illuminance at the image plane is then

We may now define the “speed” of the lens as its ability to provide image-plane illuminance for a given object luminance, i.e.

It is worth noting that this result is quite general, as it does not rely on any assumptions about the imaging qualities of the lens, whether it is focused, aberrated, its optical formula, focal length, f-number, subject distance, etc.

Now I add some extra assumptions that are useful for having a meaningful notion of f-number: I assume that this is a good imaging lens of focal length f, f-number N and entrance pupil diameter p = f/N. The object is at infinity and the image plane is the focal plane. Then, the infinitesimal area dS on the image plane is conjugated with an infinitesimal portion of the object having a solid-angular size dΩ = dS/f 2.

Given that the area of the entrance pupil is πp 2/4, the etendue can be computed on the object side as

And thus, the speed of the lens is

Equating this with the speed computed on the image side yields

I should insist here on the fact that the last assumptions I made (the lens is a proper imaging lens focused at infinity) are only needed for relating the speed to the f-number. They are not needed for relating the speed to sin(α/2). Thus, there is always a hard limit on how fast a lens can be, whereas the f-number is only limited insofar as it is a meaningful way of measuring the lens’ speed.

I think you pretty much answered your own question, there's no hard limit as such.

If you really wanted to, you could have a huge aperture and use corrective lenses to bring everything towards the sensors, but you run into two issues:

So theoretically, there's no hard limit, it just becomes very difficult/impractical to create a lens that would actually be purchasable.

Not the answer you're looking for? Browse other questions tagged aperture optics lens-design lens-mount physics or ask your own question.

11
What is the limiting factor in lens construction when it comes to f-stop values?
2
Is deep depth of field AND bright exposure possible?
4
What is the maximum aperture consistent with the Nikon F-mount?
2
Help me understand effective f-number
4
Which formula for f-numbers is correct: f/D or 1/(2NA)?