How do I attach a softbox to a rectangular fluorescent head?

I'm planning to buy my first lighting set, and I've decided to buy the following piece of gear 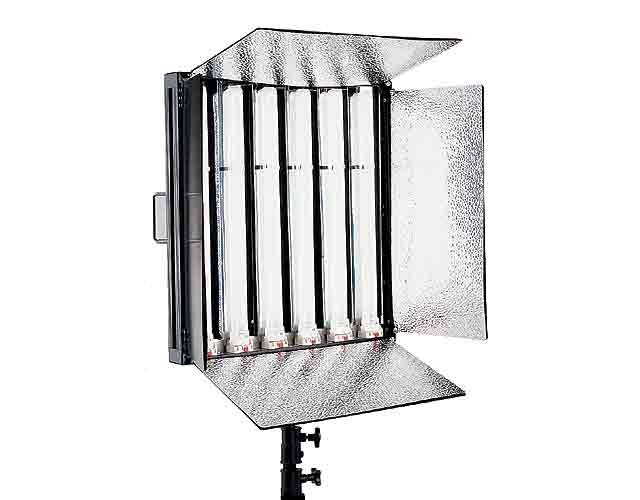 Problem is, as I have no experience with lighting, I'm kinda confused with one thing (will it be possible to attach softbox to this model). This head comes with barn doors as I see, but I need to detach them as I understand to put on the softbox. But I'm not very sure how to mount it on the head. Doest it use some connector, or you just pull it over it.

Are the lighting head of this type (rectangular with fluorescent tubes), the same when it comes to attaching the softbox, or it should come with some special connector?

A regular softbox is not going to fit on this type of light. They are designed for strobes with a single bulb which acts as a point light source and attach via a small hole in the back.

This light seems to consist of a series of florescent tubes and is thus a much larger lightsource to begin with, and will be pretty soft in it's standard configuration. You could soften it further by hanging a diffuser over the front, but I would be careful making any DIY modification to a continuous light as they can get very hot.

You will find it hard in general to get exactly the same look as a softbox/strobe combo due to light leakage and levels of ambient. I would consider whether a strobe (flash) or continuous light would be better for your chosen application before buying anything. See:

What should I consider when choosing continuous lighting vs. strobes for studio photography?

The point in using a softbox is to create a softer light, that means, a light that creates soft transitions from lighted areas to shadows. By the laws of physics and how light works, what defines whether a lightsource is soft or hard is its relative size to the subject being illuminated.

In a softbox the diffuser (the white fabric in the front) is meant to create a large area that irradiates light. The reflective material inside the lightbox is meant to redirect light that would otherwise spread in all directions towards the diffuser, optimizing the power of the lightsource and avoiding light leakage (ligth falling where you dont want/need it).

You see that the flame of a normal candle is very small, compared to a human face. It works as a hard light because almost all the rays come from a very little area, amost a single point in space. (it is a puntual source).

Now think of the largest area possible as a light source we can have access to: a fully cloudy sky. Light comes from everywhere, so you can't even project a sadow, because even if you cover the rays comming from one side, rays comming from somewhere else lessen the effect.

In the case of the equipment you are proposing to buy, the working set of tubes and reflector surfaces create a large area that "irradiates" light, it is apparently much larger than a face (it seems to be 24 x 24 inches). There are lightboxes of that size, wich means that you would'n gain anything adding it to this gear. Of course there are larger softboxes, but they aren't made for this type of lamp. And the larger soft boxes get pretty expensive, to the point that you may be better buying a second unit and placing them side by side (doubling the radiating area, thus creating a softer light).

If you really wan't to stick with this unit, you may get good results using it as it is, but if you feel you need a diffuser, you may do a special diffuser for your unit by yourself. There is a type of fabric called "taffeta". It is used for making chlothes, but the white one is very similar to what some light modifiers use. You may make a sort of "shower cap" but for the size of this light head. It would be really easy to install and remove, ans you would be able to fold and store it in the same cage/carrying case. Another option would be to stick or sew velcro in the border of the barn doors and in the dorders of your taffeta diffuser.

There are other materials you could use instead of taffeta, for example white vinyl shower curtains, or several other fabrics used for bed sheets and table dressing. (Just cut and sew appropriately and it will look pro).

Not the answer you're looking for? Browse other questions tagged lighting studio-lighting lighting-modifiers softbox or ask your own question.

13
What should I consider when choosing continuous lighting vs. strobes for studio photography?

22
What is the difference between a softbox and a shoot-through umbrella?
8
How to gel a large softbox to match ambient?
9
Why diffuse a softbox?
16
How does an octobox differ from a rectangular softbox?
10
How do I compare a continuous light panel's brightness vs. flash through a softbox?
3
How does light quality vary between fluorescent (CFL) and incandescent?
2
How much fluorescent/CFL power do I need?
2
How many EV will a softbox knock down off your flash?
2
Other methods to attach a softbox to a light stand?
5
How to dismantle this small octagonal softbox?