Yesterday I made some attempts to get started on star photography before I go on my trip. I believe I will have a lot of chances to do that kind of photography and wanted to make sure I got a hang of how to do it before I left.

I wasn't satisfied with the outcome and I figured some of the things I could do better. Could you provide input on what else I can do to improve this photo, I am going to try again tonight.

The things I have understood so far: The street light throwing a yellow light on the house wasn't helpful, I tried to use it as a light source to light up my foreground. I should be looking for a location which has less light pollution.

What else can I do better?

How can I make the house in the foreground sharper? I was using a tripod on a timer.

Also I was hoping to see more stars in the background, not sure why it didn't happen probably because of the cloudy nature of the night, I would love to get more info from people who have done this already.

At least three things conspired against you in that photo:

Move away from artificial lights, especially the sort of horrible sodium vapor lamps often used in outdoors lighting. Choose a night with no or very few clouds, and if possible, one with as little wind as possible. Also pick a night close to the new moon, or if that's not possible, at least keep the moon outside the field of view. It is going to get overexposed anyway.

What was your focus distance? If you focused all the way to infinity, the house probably simply isn't in focus due to the moderately large aperture you used. The blur looks like it might also be due to camera movement - make sure that your tripod is very steady and the camera tightly attached. Was it windy there? Even a moderate wind may cause a lot of vibration. You might also want to switch to a delayed shutter mode to allow vibrations caused by pressing the shutter release to dissipate.

When you're in a truly dark place, you can/should up your ISO considerably, right up until you cannot remove the noise effectively in post-processing anymore. Also shoot RAW for the improved dynamic range and to be able to better adjust the white balance to compensate for light pollution.

I agree with the comments made by JohannesD. It is easy to see that your tripod moved, when you magnify the picture of the stars. You can clearly see that the star trails are not small circle segments, instead they have an irregular curvature which is indicative of tripod movement instead of the usual trail casued by the rotation of the Earth.

It is possible to correct for the unsharpness using post processing. In this case it's easier than usual as you can use the star trail as the so-called "point spread function". Each single point of light should have affected only one pixel, but unsharpness causes a brightness profile that affects a group of nearby pixels, this is called the point spread function and knowing this allows you to deblur the image. Ideally you should use the average of a few stars. Also in case of motional blurring, it's best to carve up the image into small parts and deblur each part separately using point spread functions that apply for that part (in case of rotational movement the point spread fucntion will not be uniform).

This is your original image: 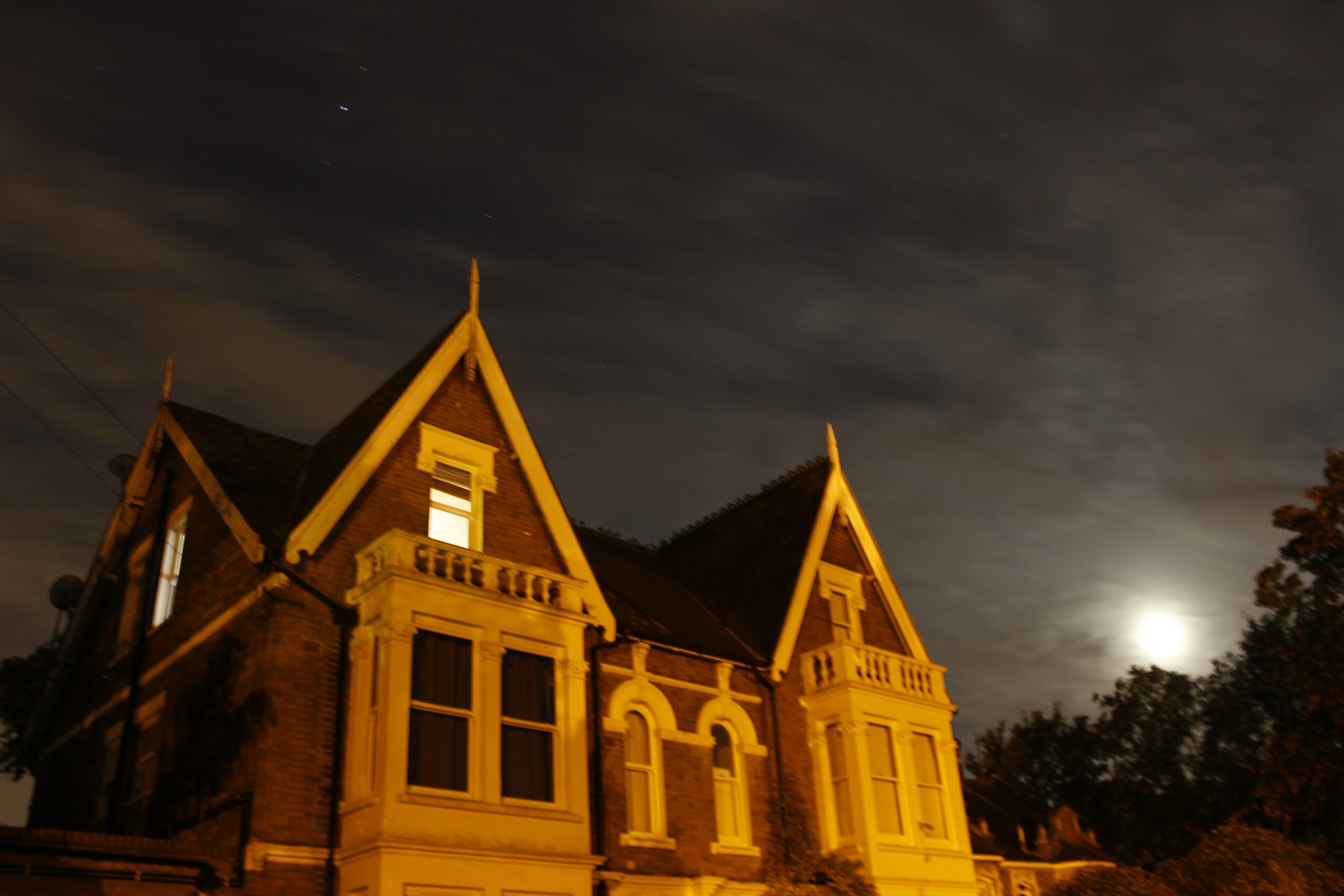 Using just the brightest star as the point spread function and deblurring the entire image with that gives the following result: 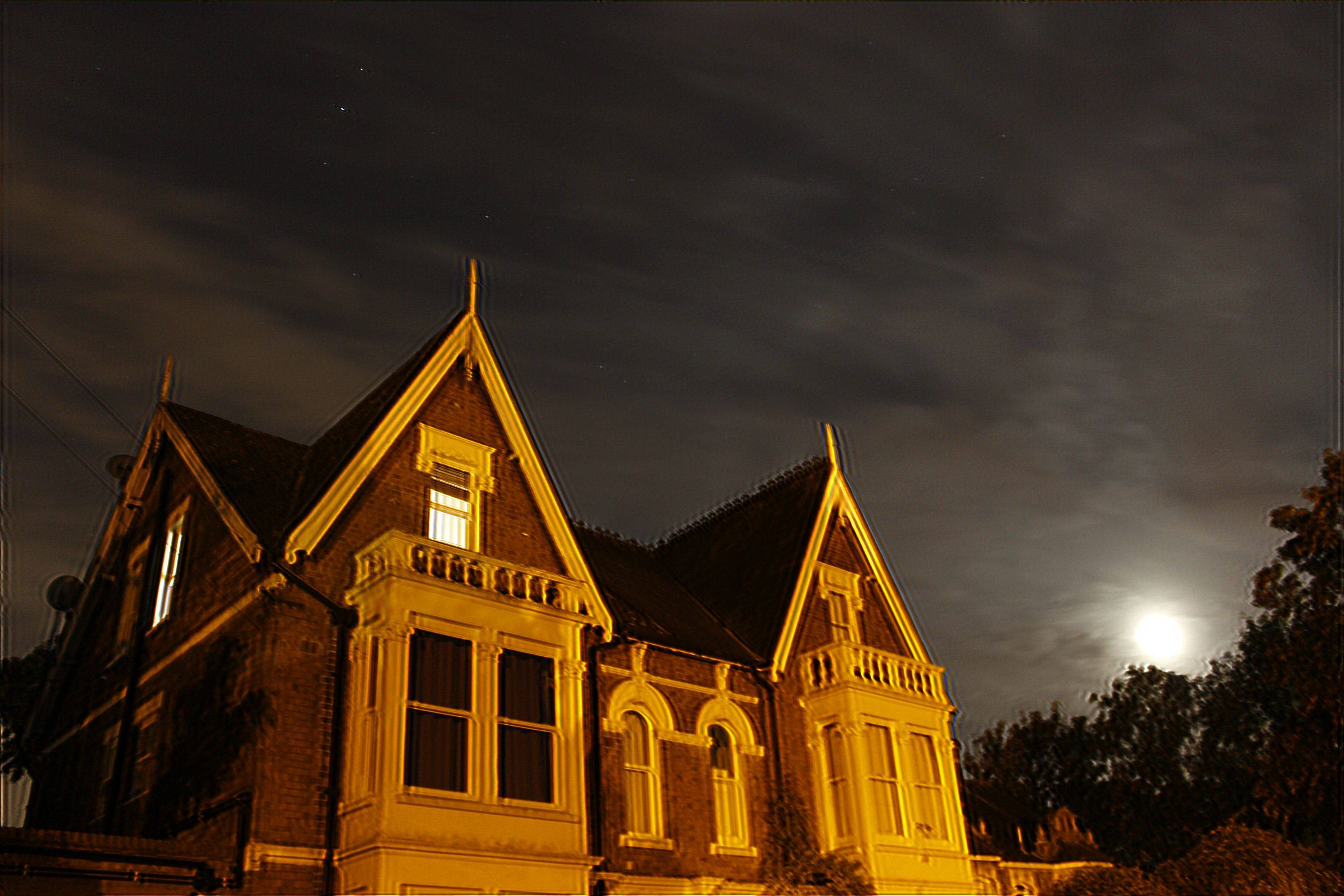 This was done by splitting the image in its 3 color components and then applying 25 iterations of the Richardson–Lucy deconvolution algorithm using the brightest star at the top left of the image as the point spread function. There are some "ringing" artifacts visible at the high contrast edges of the picture. Also the right hand part isn't that sharp.

Sharpening has made more of the weaker stars visible in the picture. A dim star that has become a smeared out trail in the unsharp image may have a surface brightness that barely exceeds that of the background while in the sharpnened image it will be represented by a sharply peaked brightness function.

Just about everything you should NOT do while attempting astrophotography was done.

No one seems to have mentioned a tripod. Looks like this image was taken handheld or on a monopod. For astrophotography you need the strudiest tripod possible so that the camera does not move at all. That would address the clarity.

Most other items were covered in above answers

Depending on the lens, f/3.5 may or may not produce best quality. While that's always true, the temptation in long exposure situations is to lean towards larger apertures than may be strictly wise to minimise exposure times. When shooting eg city scapes or similar I usually do trial composures first at higher ISO and larger apertures and then adjust for the actual shot.

Tripod or similar is of course mandatory.
I find that hand induced camera vibrations can last a surprising time.
Using a 10 second pre-exposure timer allows vibrations to reduce greatly.
For very long exposures you could also optically hood the open lens for some period at the start of exposure. Hood must of course never touch the camera, needs to be dark enough and non reflective enough to not add to the image and needs to be removable cleanly enough to not leave any traces of it leaving.

There is a whole art form devoted to the use of masks manually held in front of the lens for part of the exposure to reduce effective light levels from eg foregrounds. Achieving an inobvious boundary involves skill and magic.

Not the answer you're looking for? Browse other questions tagged photography-basics stars or ask your own question.