What are the factors that cause colour shifts in cross processed film?

I've recently received a batch of processed film back from the LomoLab of some shots I took with a Sprocket Rocket loaded with Lomography XPro Sunset Strip 100 35mm film.

The film was cross-processed, and I noticed that almost every single shot has a yellow/green tint to them. When I compare this to some shots I took with a Lomo LC-A with Lomography XPro Chrome 100 film, there is a massive difference in the results. There were no tints to the images before, and every colour seemed to pop. Granted, they were taken with two different cameras loaded with different film!

My question is, what factors determine why there are different colour tints to these photos? Is it camera, film, lighting conditions, etc?

Here's a sample of shots:

Esten is right. As I'm developing film at home I noticed, that for example the chemistry changes color during development of the Agfaphoto Precisia CT 100 to purple. The film base layer itself is also purple after developing. Inverting purple gives green - the typical green color shift of cross processing this film. It looks like the C-41 chemistry is not capable of removing that dye.

Also the color cast heavily depends on post processing / scanning. If you scan the film in the lab, it depends on the autosettings of the scanner. Thats why you sometimes get different results on the same roll: some images are heavily casted and some hardly - depending on how "good" the software can do an automatic whitebalance. If you scan the film at home (without auto correction of course), you will see that every single foto has an intense color cast (because of the dye form the base layer). Then it's up to you if you will keep it or remove it in post processing.

I did a little research and found an interessting article (allthough i can't agree with everything): Lomography cross processing

Most interessting I think is the chart at the beginning: 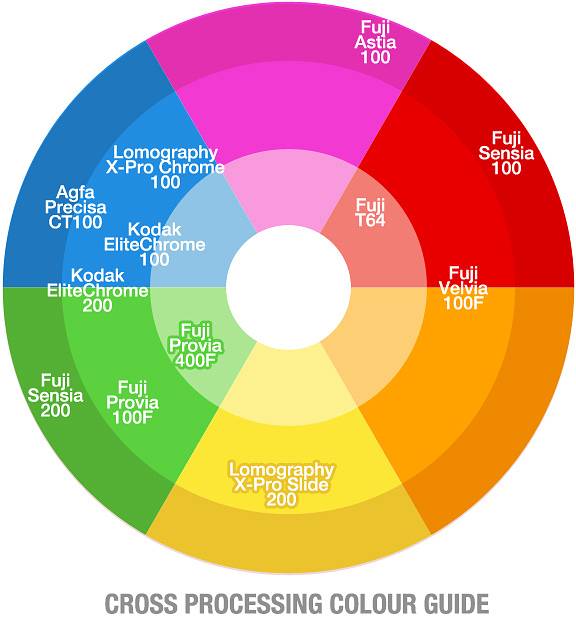 Cross processing (running an E6 film in C41 chemistry) results in different colors based on both the film and the chemistry used to process it. Films are generally known to more-often-than-not shift to one color. Velvia shifts red, Elite Chrome shifts green, etc. But, the intensity of those shifts often depends on the chemistry. The camera has very little to do with it.

There are other factors too, for example, Lomo sells redscale film. While this isn't a cross-process per-se (it's standard C41 film in C41 chemistry, the red color comes from shooting the film backwards, through the anti-halation layer), you're always guaranteed a red/orange color shift.

Not the answer you're looking for? Browse other questions tagged film developing alt-process cross-processing or ask your own question.

6
What are the results of developing slide film (E-6 process) with C41 chemicals?
7
Colors while scanning a cross-processed film: why [not] so vivid?
2
Why did my whole roll of film shot with my Olympus Infinity Zoom come out blank?
2
Does APS film “Processed” indicator mean the film has been developed?
1
What might cause my film SLR to produce partially black/missing frames?
4
Orange and other artifacts in photos from film camera
7
What exactly does it mean to say that a certain film or process 'is tolerant' or 'has latitude'?
12
Two films in a tank, only one comes out with a development error – why?
5
My negative is completely black and opaque — is this a camera problem, my mistake, or the lab's?
5
First film roll just got developed and all my pictures have a white fog on them?