Why do people bend down in a group photo?

Surprisingly, while asking this question I have googled for such a pose and don't find any at all, but there are tons of such photos that I see on Facebook.

posing group-photos
Share
Improve this question
edited May 1 '19 at 23:43

It's because the photographer isn't giving them any helpful feedback, and based on their experience with photography, they think they need to adjust in a certain way to fit the frame, or in this case to make sure people in the back are visible.

Of course, the subjects are in totally the wrong position to do this in a useful way except by luck, but it becomes a sort of habit — like a goofy smile or saying "cheese".

It's even common to get "helpful" bystanders (parents or other involved individuals who aren't part of the scene) standing next to you the photographer and saying "squeeze in" even when it's not necessary — they don't know how wide your lens is, or which faces are blocked from your camera's perspective.

It is so you don't block the faces of the people behind you. Of course, the best way to do this is just sort people based on height, but often group photos are rushed, and you get what you get. People are polite enough to know when they are blocking someone behind them, and they bend down in many different ways. If everyone has grabbed their knees, that's been instructed, and it's common with sports teams, as it's a somewhat "active" pose, while also providing that "everyone can be seen" attribute that you really want.

It's a matter of being polite. I've taken a few group photos... sometimes it isn't necessary and people won't do it.

In this group, this happened naturally I didn't instruct them to stand this way or in these positions, I just said "gather around the airplane" and let them do whatever they wanted. 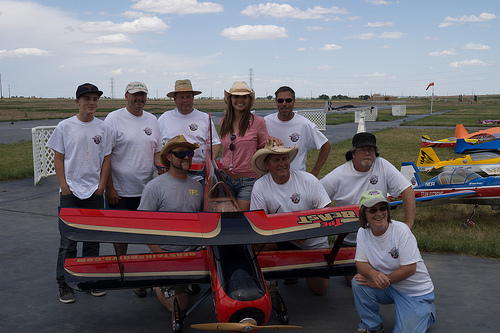 In this one, there was also no instruction given. We instinctively know it's a large picture though, and nobody's gonna break their knees in this one, it isn't necessary. 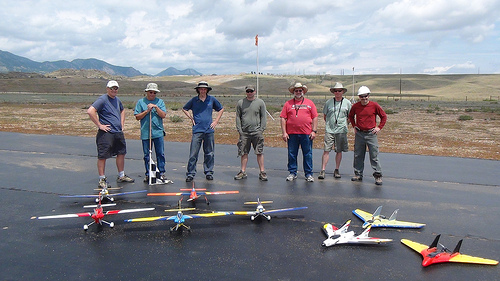 So, in conclusion I will say this bending down thing is a natural reaction that polite people will have when they are in front of someone, and if you don't like it, you're gonna have to give instructions.

When people bend down, the framing becomes a lot more complete. Otherwise, there will be plenty of negative space. By negative space, I mean the body, which may not be the objective of the photo to show since it is only the faces that matter in a group picture.

For eg: in a family portrait with many people, people sit on chairs with kids in their arms and the few are standing right behind. Hence, composing the image in a lot tighter fashion that if they were standing in one line and a lot of negative space.

Depending on the vantage point, the composition of background matters as well.

Not the answer you're looking for? Browse other questions tagged posing group-photos or ask your own question.

35
Is there a trick to shooting large group portraits without blinkers?
14
How to pose and arrange people in a group shot?
7
How to best take a group photo with very large differences on height?
2
Best location for group photo near canals in Amsterdam
2
outdoor group photo - depth of field, other concerns?
0
Is a Sigma 18-50mm or Canon 28-105mm lens better for group shots, and why?
2
How to pose to look 'cooler' or more 'dashing' in a photo?
25
Why do people keep telling me that I am a bad photographer?
3
How can I light a large group photo at night outside on a stage?