Why do I meter under the chin with a lightmeter?

Every single tutorial or video has advised to meter for a portrait right under the chin. First of all why? If the face is the most important part, wouldn't you meter right at the face?

Lightmeters are superior to in camera metering because they are able to measure the incident light, not just the light reflected off the subject.

Reflected light metering is less accurate as the camera/meter has no way of telling the difference between a white cat that is massively underexposed and a black cat that is correctly exposed.

With incident light metering you are not trying to detect hotspots on the subject that could be overexposed, but instead you trying to measure the strength of the light that's about to hit the subject (before it bounces off toward the camera). If you know how strong that light is then you can be sure that no part of the subject will be overexposed, even if they move.

If you just try and measure the reflected light from the brightest part of the face then you could get overexposure if the subject moves and another part of the face reflects even more of the incident light.

For it to be accurate you need to hold the lightmeter somewhere close to your subject, with a direct line of sight to the lightsources, but also somewhere that isn't reflecting a ton of light back onto the meter (most meters have a single hemispherical collection surface, so light from the subject is generally not a problem).

This may have been why you've seen videos of lightmeters placed under the chin, it's a convenient place to hold the meter that is close enough to be accurate, although in my experience in front of the cheek is more common. It is possible, though unlikely, that the meter was set to record reflected light from a shadow region in order to judge the strength of fill light needed, in this case you'll see the white dome has been removed.

Putting the lightmeter under the chin makes sense to me because:

a) It is incident light what's being measured, and the little sphere is to be located as close as posible to the surface being iluminated (i.e. the face's skin). Putting the lightmeter at the same distance from the light source is crucial as light intensity varies with distance to the source. The key point here is "incident". Both the dome of the meter and the chin are exposed to the same source and at the same distance from it.

b) You can not put the hideous thing, along with your hand right in front of a person's face, It is plain rude and will make the person uncomfortable, so later when actually shutting it would be more difficult for the portraited person to achieve a natural, confident and relaxed look. (They may be wondering when the next personal space violation is going to take place). In this regard I have even seen photographers hand the meter to the model and politely ask them to put it right besides their face, thus avoiding intrusion.

Reinforcing point a): It's not absolutely necesary to put the light meter under the person's chin, you can put it right at the side, trying to locate the sphere near the eye of the person. Some photographers I have worked with, actually take several measures, one by each eye and other under the chin. With this they measure main light (in one side of the face), fill light (in the other side) and the sum of both (Under the chin, where both light sources are "visible").

If clothing is particularly important for the photo (like a fashion shoot or for a clothes/accesories catalog) or if skin is showing besides the face, you may need to measure other areas as well. A typical example may be if the portraited person is showing some amount of cleavage, you would like to balance that with the face, or at least make sure it won't be brighter than the face.

If you where to measure reflected light instead, then you would remove the white dome and turn the light meter around (i.e. facing the subject, not the lightsource). In this procedure, the light reaching the sensor in the meter is not coming from the souce, intstead it's coming from the person's skin. In such case, it's more likely you would measure also the cheek bone, forehead and nose, because you would be making sure of wich contrast level you would produce between those areas.

In digital photography, the most issues come from the dark portions of the image where sensor noise has the most impact on the quality of the result. Electronic sensors accumulate light, but while they are collecting light, they also collect random noise. To avoid this noise being an issue, a technique known as ETTR or exposure to the right is even used frequently, though proper lighting is still preferable.

Even if not strictly using ETTR, highlight recovery on most modern DSLRs is superb (due to headroom when shooting RAW), so the risk of over-exposing is far lower than the risk of sensor noise in shadows, thus you want to meter the darkest parts of the image to ensure you have sufficient light reaching the darkest parts of the image so that you end up with enough signal in the shadows to resolve the image well. You do need to be mindful of the brightest spot to avoid clipping, but if the scene is well lit, it should rarely be an issue.

I've wrestled with this since I bought my new light meter and it didn't seem to function right. I asked the dealer and he said "under the chin." That worked, but it took me a while to figure out why. Here's my take: since a meter isn't really required for ambient light shots, the main purpose (other than studio) is to determine flash power for fill flash. And since you want the fill light to be 1/3 to 1 stop over the shadow, it makes sense to meter both ambient and flash power in the shadow under the chin (hard to get a meter into the eye socket shadow!).

Let us take a look at this light setup. A lateral light, where we can clearly see that side A has more light than side B. So if we want an average see how under he chin is at the middle of the two zones.

The chin is actually part of the face. The face is on the bottom half of the head. You could put the light meter on the top of the head, but this is too far from the face and from the center of the frame. 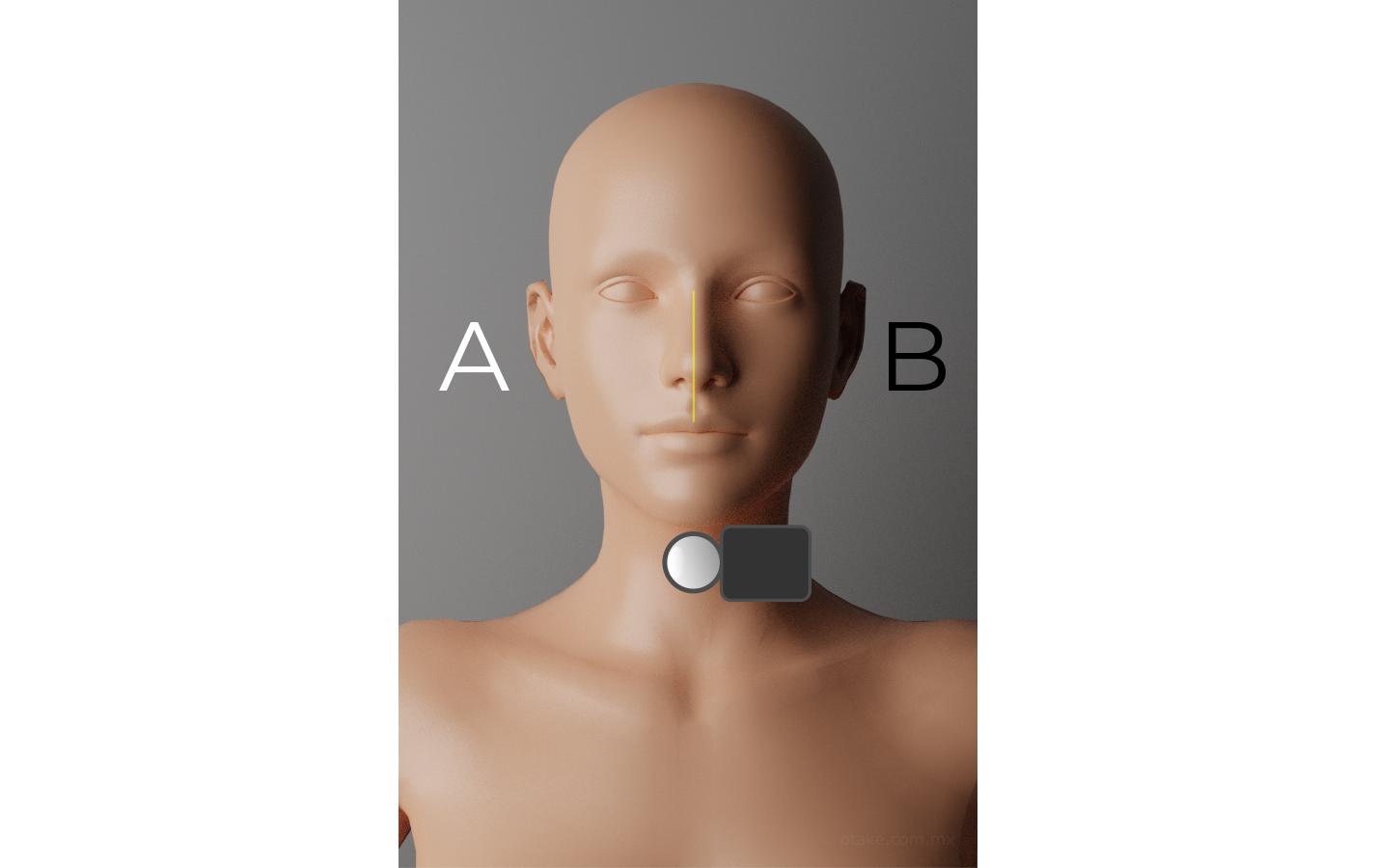 But you probably should not...

Now, imagine we have the light on the front of the face, a bit upward, like a butterfly light. Now the chin can be too far from the center of the important zone, so, on this schema, a good option can be putting the lightmeter next to the cheekbone. 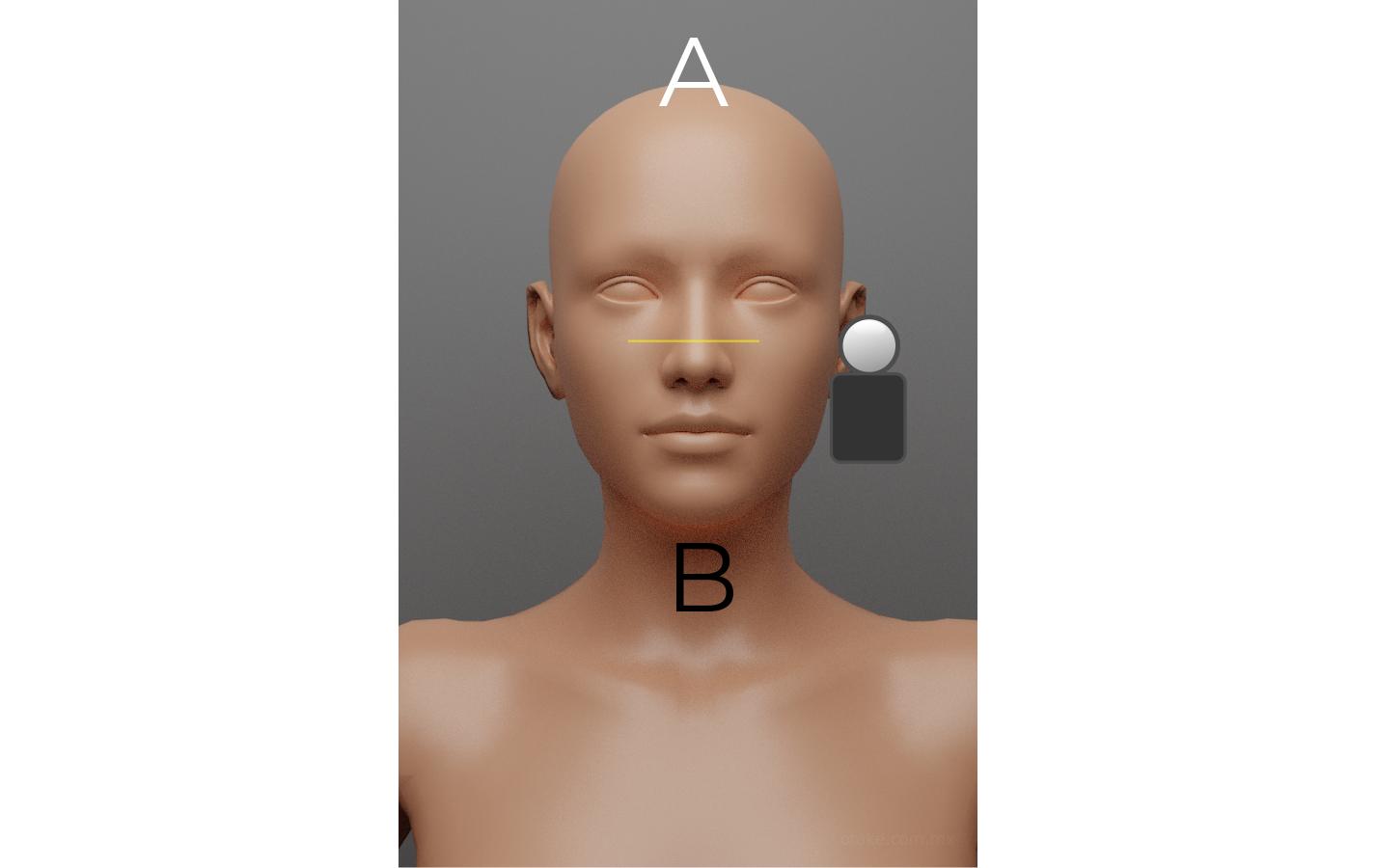 On a Rembrandt lighting, where the light hits the face diagonally, you could put the light meter under the cheek on the illuminated side. The point is to compensate for the angle where the light is coming. 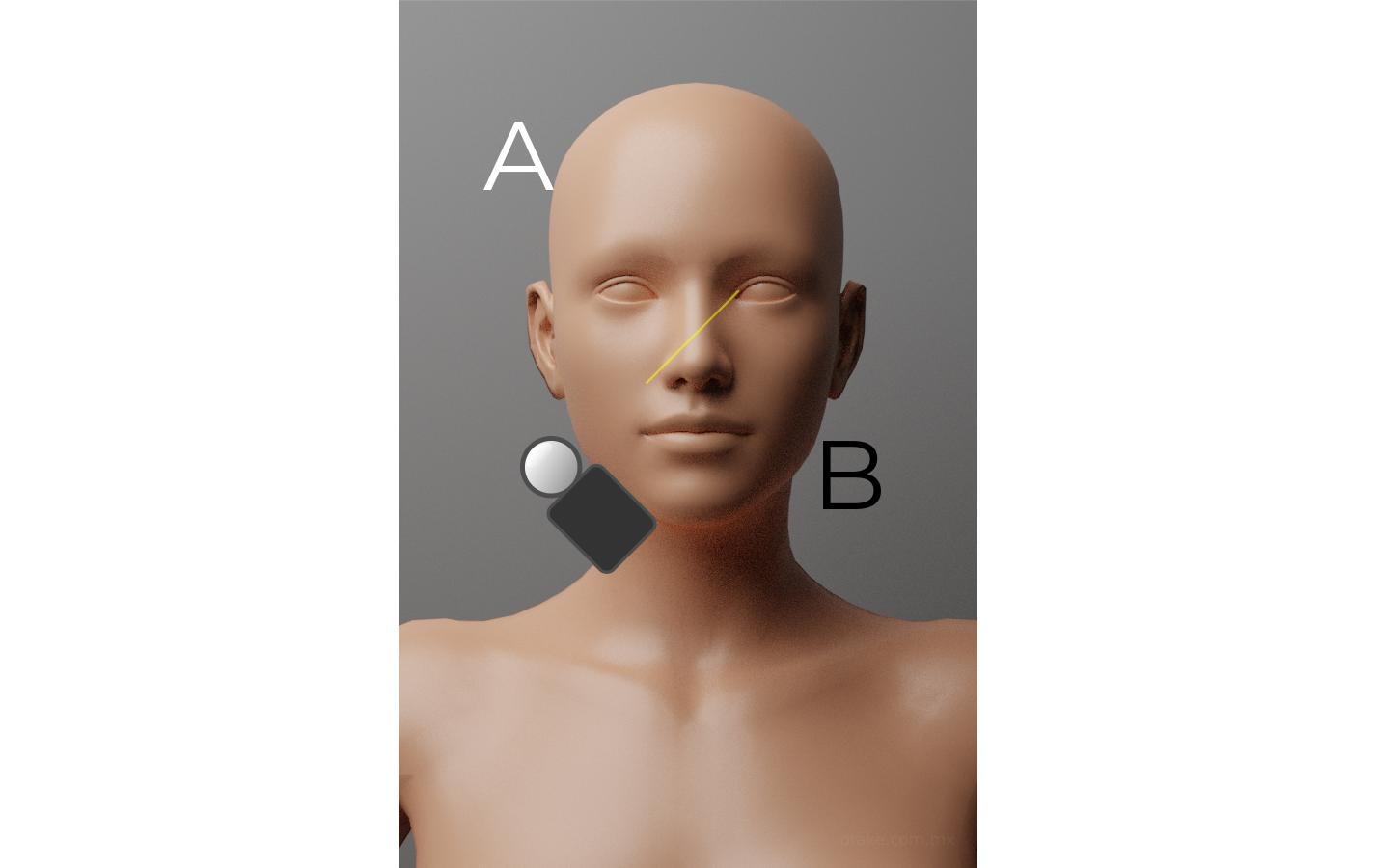 One thing that you want to keep consistent, is to put the light meter on the same plane as the face. You do not want to put it in front of the nose, or behind the head. 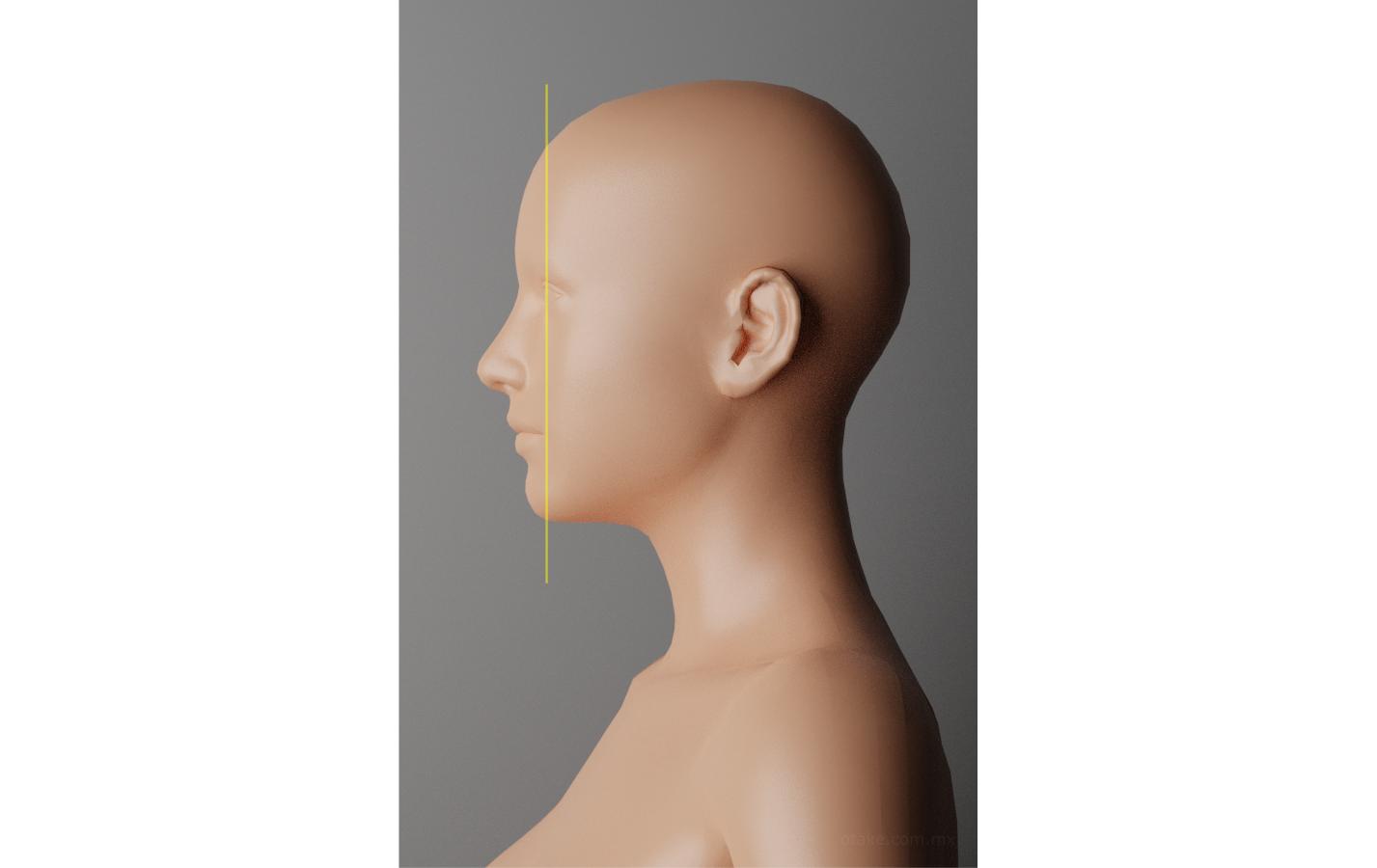 The position of the light meter is more important if your light source is really close to your subject. But if your lights are far away, you have a bit more room on where to put it.

For your subject, It is more comfortable to put the lightmeter under the chin, than feeling a cold device on the cheek for example.

Not the answer you're looking for? Browse other questions tagged lighting portrait metering light-meter or ask your own question.

4
Are modern digital cameras better at dealing with blown highlights than they used to be?