There's an ongoing craze for Wi-Fi enabled SD cards. The concept is clear and impressive, but I would like expert opinions or experiences with these SD cards.

Currently there are only a few reviews for the cards. Is it true that they affect the battery performance? Other than that, is there anything else that one should consider when buying these new gadgets?

Yes; I have an EyeFi card and my battery doesn't even stand 50% of its performance. Fortunately I can turn EyeFi-wireless-mode off in my Nikon's D3200 menu.

It's described in the user manual here: 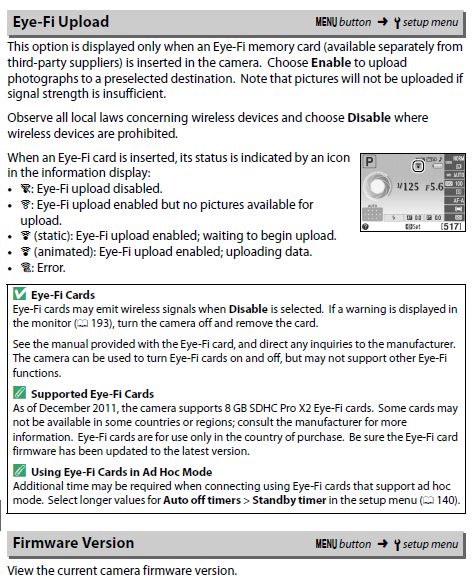 The cards are considerably more complicated electronically. Additional power would be needed to drive the ARM processor vs. a typical SD controller. Once you add in Wi-Fi radio and the encryption requirements that come with it you should expect an impact on battery life (though most cards now shut down Wi-Fi when it is not transmitting which helps.) The cost of a spare battery vs the ability to have access to Terabyte scale storage and immediate availability on screen for editing / post seems like reasonable tradeoff if you will use those features.

Another effect will be on performance. Eye-Fi, who licence their technology to others including Transcend and Sandisk, has a product line made of mainly SDHC class 4 with some 6's and a couple of 10's. At this point (July 2014) none of the major players (Eye-Fi, Transcend or Sandisk**) offer any UHS-1 and UHS-3 devices which would suggest that the processor imposes performance limitations beyond the flash memory. If you're shoot a lot of bursts or action then this may affect your decision.

Beyond those your consider are just like adding any other gadget to your ecosystem. Will it physically connect? Is the software compatible with everything else? Does it have dependencies (on software for example?) How will it affect your workflow?

** I've not forgotten Lexar, they have no Wi-Fi cards in their product line up. They had one in 2008 under the name Shoot-n-Sync.

Not the answer you're looking for? Browse other questions tagged sdcard wifi eye-fi wifi-sd or ask your own question.

8
EyeFi doesn't support CF cards. Are there any alternatives that do?
1
Will I benefit from using very fast (> 30 MB/s) SD cards in a non-UHS enabled camera?
3
What Eye-Fi cards support Ad Hoc networks (Wireless SD Cards)?
7
Why are CF cards so much more expensive than SD cards?
2
Why don't consumer interchangeable-lens cameras support two SD cards?
4
Will wifi SD cards work with old digital cameras which only support up to 2GB cards?
4
Does a micro SD–to–SD card adapter affect the write speed of micro SD cards?
0
Canon 70D wifi cannot be enabled