Is a VR lens worth getting?

I'm thinking of getting a new lens for my Nikon D200. The question is whether or not to get one with VR (Vibration Reduction).

I'm looking for something for taking motor sport and wild life pictures.

Are there any situations where the VR features cause problems? I've heard that if you want to take action photos that involve panning, then VR can be a problem.

There are a variety of types of lenses with VR/IS capabilities. Many of the older, first generation versions have limited stabilization capabilities, and no way to restrict stabilization to a single plane of motion.

Modern lenses with VR/IS capabilities tend to be much more advanced. They usually offer anywhere from two to a whopping four stops of hand-holdability in average circumstances. Newer lenses also tend to include a mode switch that allows you to disable stabilization in the horizontal plane, allowing you to pan the camera to capture sports or wildlife motion without stabilization interfering, while still stabilizing in the vertical plane.

Another interesting comparison can be made with telephoto zoom lenses. A comparable example would be Canon's 70-200mm lens line, of which there are four current models. Two f/4's and two f/2.8's. The prices break out as follows:

The 70-200/4 IS costs about the same as the 70-200/2.8 w/o IS. The f/4 IS version brings to the table a whopping 3-4 stops of additional hand-holdability, which technically makes it a better low-light lens than the f/2.8 w/o IS...by nearly two stops. With good technique, you should be able to get shots with the f/4 IS lens that you could get with an f/1.4-f/1.8 Non-IS lens, which is pretty amazing. (A good hand-held technique would be required to get the full 4-stop benefit of this particular lenses IS, but with practice, I've heard many people state that they can easily get 4 stops lower shutter speed.) I believe Nikon has very similar offerings in the 70-200mm range with VR.

Stabilization only works to counter your involuntary movements, never your subjects. So if you are shooting things in motion, it won't help you except for extremely long focals.

If you are shooting a 200mm and you need at the very least 1/1000s to freeze motorized sports, then stabilization is not needed. You'll certainly be better of buying a lens with a wider aperture. For wildlife you could use stabilization to shoot them at rest, but those pictures may arguably be less interesting.

Having VR does not cause a problem because you can turn it off. It is recommended to do so when shooting from a tripod.

Others have done a decent job of addressing the good and bad points so I'll provide an example instead: 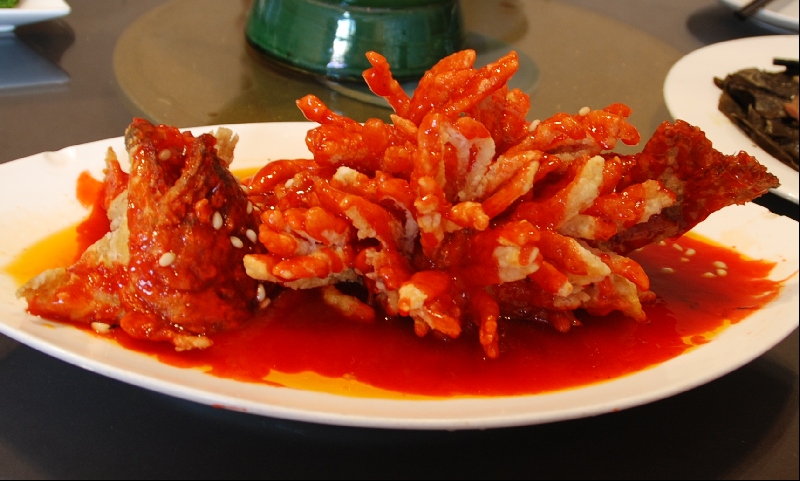 Strange food but an ordinary pic, isn't it? This was taken with a Nikon D80 with the 18-200mm VRII lens--it's handheld, 1/2 second exposure time.

(What happened is that with my glasses on my eyes are too far from the camera and thus I can't see the status info below the image in the viewfinder. Without my glasses I can see it but can't read it. If my eyes would ever settle down I would get a corrective eyepiece but since I have to get new glasses every 6-8 months I haven't done this yet. I knew the light wasn't good and I hoped the lens would save the shot, I didn't realize just how bad it was until I took it.)

I also have an only slightly blurred shot with the same equipment that was handheld but braced, a 4s exposure.

For longer (more zoom) lenses is and if your planning to use it without tripod is worth it! For street zooms, with roughly a focal length roughly below 100mm you may get away with that, but for telephoto lenses is essential.

Well if you're like me and don't like pushing towards higher ISO count but still want sharp photos in low light conditions, don't buy anything without VR/IS. Also depends on what you'll be shooting. If you mostly shoot landscapes and architectures you can use a tripod easily and in this case you don't need IS/VR (I turn IS off while shooting landscapes). But overall, IS/VR is something very nice to have and will save you lots of trouble in cases. Try if you can get a lens with IS/VR from a friend and shoot with and without IS/VR. Things will be clear to you.

There are also cameras with sensor-shift VR. You can buy cheaper non-VR lenses if your camera body does the VR job. For example Sony A37 does this. Though the question asked about lenses for Nikon D200, the title of question only asked "Is a VR lens worth getting?"

One answer in How VR works? has listed more camera makers with sensor-shift.

Not the answer you're looking for? Browse other questions tagged lens nikon or ask your own question.

2
What type of camera do you recommend for photography of motorsports?

6
What “all rounder” travel lenses can help me decide between Sony, Nikon, or Panasonic Micro Four Thirds?
0
Help me with information to take a lens purchase decision
4
Is it worth to buy old Sigma lens instead of Nikkor?
4
EOS Rebel T3i 18-55mm lens won't take a picture - happened with two lenses
8
Should my collection of older Pentax lenses be a deciding factor in my first DSLR purchase?
2
Nikon Lens makes buzzing / humming noise when VR is on - is this normal?
2
Need help choosing between two DSLR/lens setups