I'm very new to product photography and would like any newbie advice to the following problem:

I have a basic light setup with 4 florescent lights with umbrellas with a white muslin cloth backdrop. In the past this setup has worked great for products (toys, sports gear etc). I'm now attempting to photograph a white canister with a black label. The edges of the black label have a white halo that is where I'm struggling: 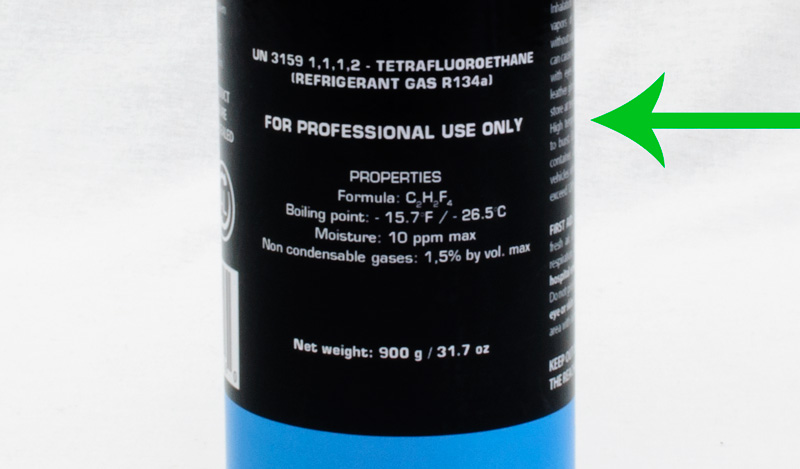 Any advice would be great! Thanks!

PS: Here's the light setup which I'm sure could use some help! 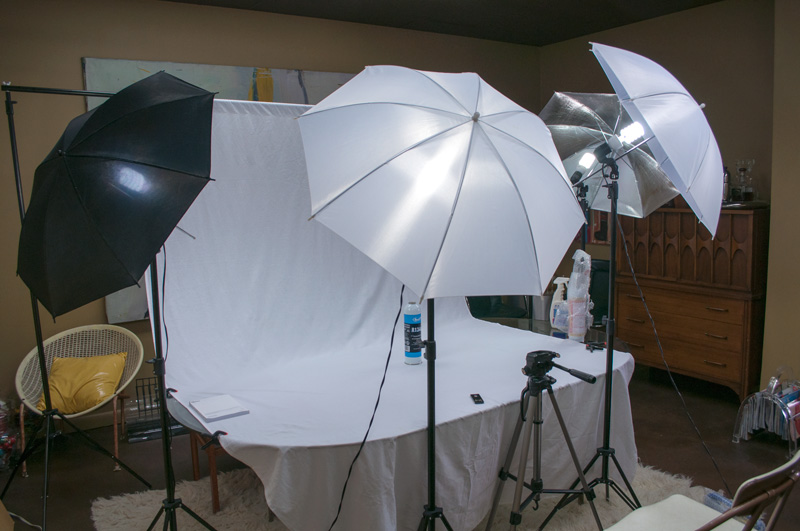 A good reference for lighting is Light Science and Magic, I think you would find it highly informative. In this image the sides of the canister are getting blown out where you would actually like them to be a little darker so that there's a strong figure/ground differentiation. Try some black flags, just out of the cameras frame on either side of the canister. The flags will keep some of the light from hitting the edges but they will also reflect in the surface, making for a darker edge.

Also, many libraries have the title I mentioned, save yourself some money!

The halo you describe is actually a reflection either from the background or from the rearmost umbrellas. (The silver lined ones in the picture).

Remember that when light bounces off a surface it leaves the surface at the same angle that it came in. This almost rules out the umbrellas as being the culprit, as they are higher than the object, so light coming from them is more likely to bounce towards the bottom of the backgound.

However, the vertical part of the backgound is in line with your lens at the time you take the picture, and part of the light that comes from the white muslin incides on the back and sides of your subject, but the one that incides on the sides bounce right towards your lens. This comes from the sides of the background, i.e. not the part right behind the canister, but the part just at the sides of it.

What I would do is: increase the separation between the object and the vertical part of the background, use a longer focal distance (for a narrower field of view) and cover the part of tha background that is not in the picture with black paper to reduce stray light from the background.

Yet another thing that may help you, although more elaborate, is to add some light blockers at the sides and a little towards the back of the canister. These may be a couple of black cardboard pieces at least as tall as the canister. I'd position them like this: If the object is the center of a clock and the camera is at the 6 O'clock position, the ligh blockers are put vertically at 10-11 and 1-2 aproximately, with the black side facing the object and as close as possible without causing unwanted shadows and not getting into the frame.

Not the answer you're looking for? Browse other questions tagged product-photography studio-lighting or ask your own question.

20
Why can't I get a decent white background with product photography?
20
How can I photograph a reflective convex cylindrical trophy without reflections?
5
Are there any downsides to using white printer paper as background for product photography?
1
How do you shoot black product images?
2
What do I need to change to prevent this denim looking grain/noise in my product photos?
8
Lighting on highly reflective surfaces - chromed Dobro guitar
2
What's the best way to avoid color fringing in shadows using budget gear?
13
How do I get rid of this orange tint and reflection while keeping my label well lit and visible?