Why is a camera's dynamic range expressed as its photosite capacity divided by the read noise level?

Let's say that the photodiode has a storage capacity of about 44900 electrons and the read noise is of 10 electrons/pixel: the dynamic range is, in a few words, the ratio between these two values. But I'm not able to figure out why the range of greyscale levels available with this dynamic range is equal to 4490.

Simple: you're confusing the term range with the idea of number of levels. That's not the case. The value in the dynamic range ratio says nothing about the number of individual gray levels available within that range.

The range is the span, not the number of discrete bits. A ratio is used (in your example, 44900:10, or approximately 4500:1), because the actual number of photons counted is not the information we're concerned with here — we just want to know the relationship between the brightest and then darkest possible values. (Here, the brightest value is 4500× the darkest.)

This can also be expressed in stops, which is simply applying a base-2 logarithmic scale to this same ratio. That is, 4500:1 is approximately 12 stops (because 4500 is slightly greater than 2¹².) Or, to put it another way, with this amount of dynamic range, you can capture 12 doublings of the brightness.

Within each of those doublings, you could use a single value per band, resulting in a hard edge between each band of brightness. Or you could use tens, hundreds, or thousands of gray levels per band, for a smooth grayscale.

Or you could use one bit, flipped to either "bright" or "dark" — and the ratio between those two levels would still be the dynamic range.

Here's an example of that. The following image has only two different values, and let's say (picking a number that might be reasonable for an LCD screen) the dynamic range between the blackest black and the whitest white is 1:1000. 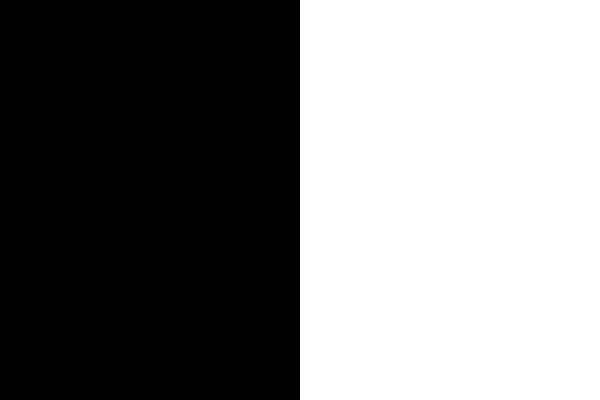 Imagine that the dark side is the lowest level that can be reasonably read, and the light side is the brightest. 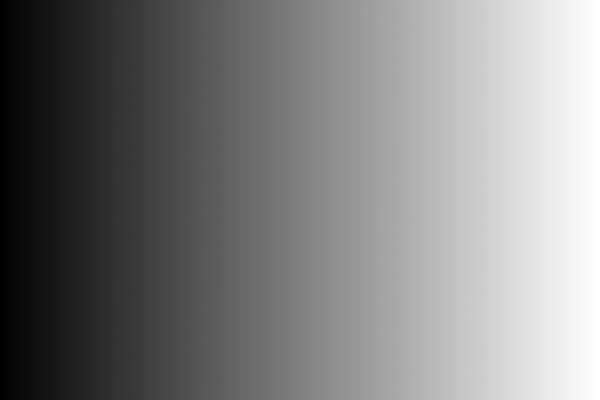 The dynamic range here is the same — the ratio between that darkest dark and the whitest white. But, obviously, there a lot more discrete gray levels in between. Since this is an 8-bit PNG, it happens that there are 256 total. But that's an entirely separate thing.

Of course, the more dynamic range you have, the more bits are necessary to provide a nice, smooth gradient. But it's not mandated in any way, or part of the definition.

Not the answer you're looking for? Browse other questions tagged sensor dynamic-range or ask your own question.

0
How is f-stop a measure of dynamic range?

33
How does the dynamic range of the human eye compare to that of digital cameras?
5
what's the relation between sensor size and image quality (noise, dynamic range)?
2
What is the precise definition of SNR, as used by DxOmark?
2
Does a deeper photosite increase the dynamic range?
2
Will black level of one sensor reduce its dynamic range?
3
Real world Dynamic Range
5
Reconciling gain (e/ADU), full well capacity and ADC bit depth
0
Why does a more expensive camera have fewer pixels?
2
How close are we to the theoretic limits of sensor low-light performance?
1
Full Well Capacity Questions