Whilst on holiday in Iceland, I forgot to buy a ND filter, which didn't allow me to take long exposure shots of waterfalls. I have a few images that I would have preferred to expose for longer but couldn't due to the abundance of light.

Is there any way I can perhaps make my photos look slightly longer exposed? I have looked at tutorials on youtube, and they recommend using a motion-blur filter, I have tried this, but it doesn't give such a great result. Does anyone know anymore techniques I could use?

I was going to say that it isn't possible, but I did figure out at least one way to sort of do it, at least for some images of some waterfalls, with somewhat acceptable results sometimes. Caveat emptor.

The trick I came up with relies on the fact that, in a typical picture of a waterfall, the water looks white while the background is mostly dark. Thus, by using a technique similar to exposure fusion, we can blur the water while keeping the background sharp. Also, as long as the water is all mostly moving in the same direction (down), we can more or less get away with a simple linear blur — don't try this on a picture of churning rapids.

For a demonstration, let me use this public domain picture of the Pacheco Waterfall in Venezuela by Hellen Perrone at Wikimedia Commons, taken with a shutter speed of about 1/200 s: 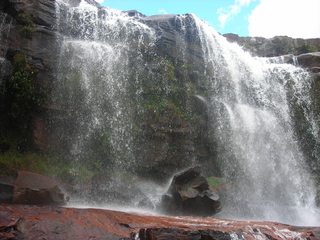 (Click the images to view them at full size.)

The first step is make a copy of the image on a new layer, and to cut away anything that is (close to) white except the waterfall. In this photo, that mostly means the sky: 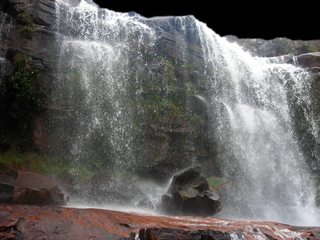 (Here, as in the images below, transparent areas are shown as black.) 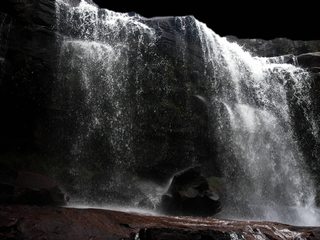 (Again, the layer is shown on a black background. Here's a small transparent PNG version, if you prefer.)

To better separate the waterfall and non-waterfall parts, we need to increase the contrast of the mask. To do that, I selected the mask and adjusted its color levels using a strong S curve: 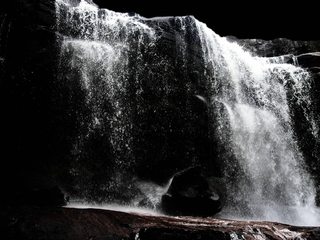 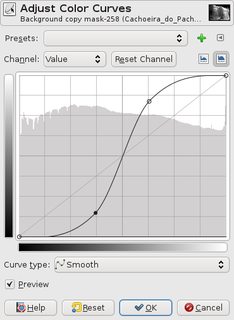 (Here's another transparent PNG for those who like them better.)

After applying the layer mask (to merge it into the alpha channel), we're ready to add some motion blur. Here, I used a linear blur with a 50px blur length (quite large, to make it obvious even at small sizes) and an angle of 265 degrees (5 degrees off straight down): 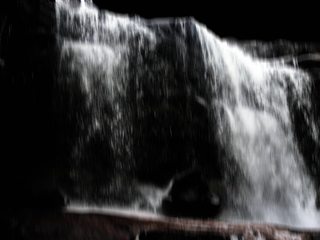 (And here's a transparent PNG version of this step too.)

Replacing the black background with the original photo, the combined image looks like this: 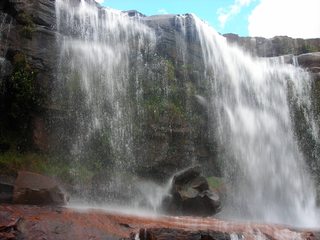 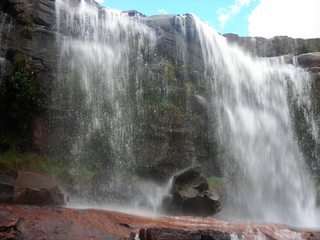 Motion blur is the right answer. Perhaps all that's required here is a bit of technique. If you post an image for us to play with, I think one of us might get better results than you did, and can then tell you how they did it.

In the end, what you're asking for here is for someone to create time. You're asking us how you can invent another second or so of the time that occurred after the camera's shutter closed. A good photorealistic painter can create such things, and there are clever algorithms for adding motion to a still photograph, but these things require a lot of skill and work, because it's all pure invention.

We see the same problem in computer generated 3D graphics. If you render an animation at a steady 30 fps, you don't get 1/30 sec exposures in each frame. If you did, moving objects would have some motion blur. Instead, a typical 3D rendering program gives you an instantaneous "exposure" for each frame, which is why a lot of 3D animation looks super-crisp and unreal. To fake the motion blur, you have to render the positions of the moving objects in the scene at several intermediate points along their motion path, then blend them together somehow. So, instead of rendering 30 fps, you might effectively have to render 300 fps, then blur that down to 30 fps.

I would have taken many pictures on a tripod, aligned them (e.g. using the align_image_stack program) and then taken the average of the pictures. This can yield better results than using an ND filter as aligning the images will correct for slight movements of the camera orientation, e.g. due to wind.

If you have Photoshop CS6 Extended (or CC) you can do the following:

(1) Shoot a burst of images of the moving water subject. For example in my first ever try (see below) I shot 15 images at 1/50th and f8 (freehand with a stabilised lens) of a Waterfall. (BTW I actually came here looking for an answer on doing this, but am ending up providing one instead, with a bit of a gap to try stuff in-between).

But you can also try:

(1) If you have several images shot from the same position in the same direction (you may need to even out the exposure if some are lighter/darker) and at the same focal length.

(3) In the resulting dialogue select your files, Select "Mean" in the drop-down and tick "Attempt to Automatically Align Source Images".

(5) Crop to suit - note the example below is uncropped to show what you get. 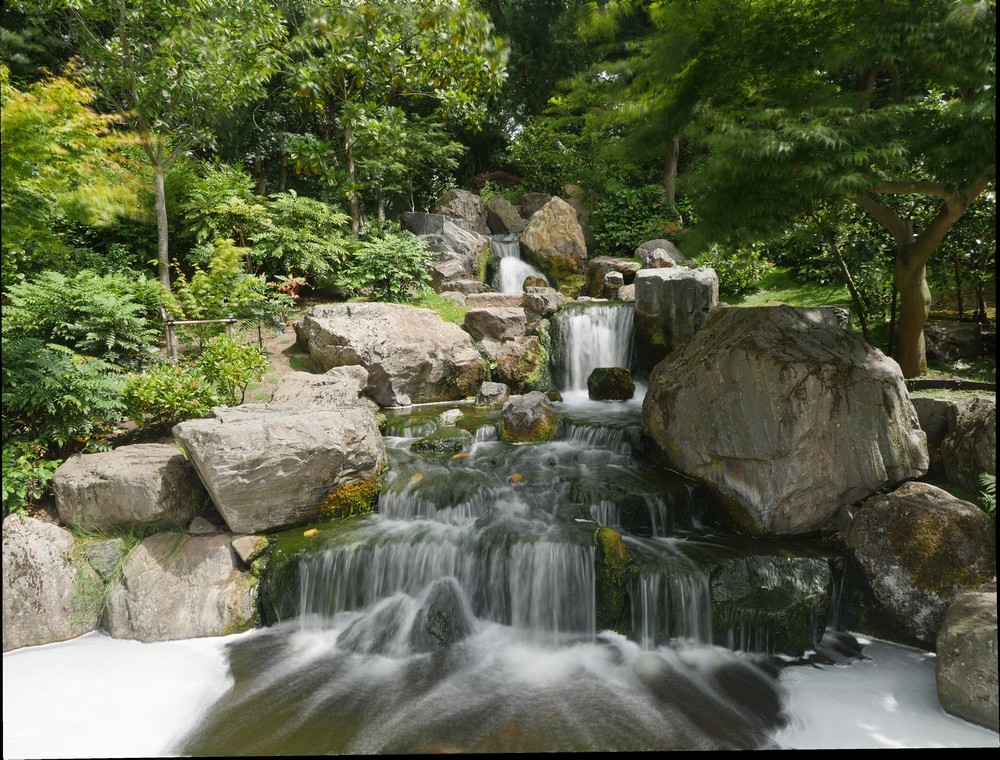 Dr_JonDr_Jon
2633 bronze badges
add a comment  |
Photo of the Week