Please can someone explain the "Rule of Thirds"?

The rule of thirds is actually the golden ratio. It's a number that divides a line into roughly 2/3 and 1/3. 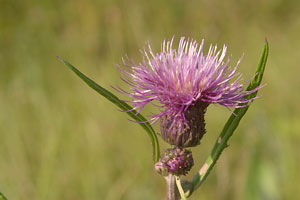 This can be applied both horizontally and vertically, and used for different purposes. The lower right spot is considered positive while the upper left is considered negative, which can be used to enhance what you want to express with the picture.

Updated link to an example of upper left positioning: http://www.guffa.com/Photo_view.aspx?id=5016

The rule of thirds is a popular and common compositional guideline for photography and for painting.

In its most basic form, the rule of thirds suggests that dividing areas within the frame into thirds is more successful than an even division. For example, the sky should occupy the top third (or two-thirds) of the frame, rather than sharing the space evenly with the ground.

A second use of the rule holds that objects of interest should be placed at the intersections of the horizontal and vertical third-lines. Proponents argue that these four points have a special strength.

Because I tend towards obsessiveness, I did some research into the original source of this term. The first use appears to be in John Thomas Smith's 1797 book Remarks on Rural Scenery. Since I work at a university, I have access to some very old books, and I've copied out the relevant passage for your enjoyment:

Two distinct, equal lights, should never appear in the same picture : One should be principal, and the rest sub-ordinate, both in dimension and degree : Unequal parts and gradations lead the attention easily from part to part, while parts of equal appearance hold it awkwardly suspended, as if unable to determine which of those parts is to be considered as the subordinate. "And to give the utmost force and solidity to your work, some part of the picture should be as light, and some as dark as possible : These two extremes are then to be harmonized and reconciled to each other." *

Analogous to this "Rule of thirds", (if I may be allowed so to call it) I have presumed to think that, in connecting or in breaking the various lines of a picture, it would likewise be a good rule to do it, in general, by a similar scheme of proportion; for example, in a design of landscape, to determine the sky at about two-thirds ; or else at about one-third, so that the material objects might occupy the other two : Again, two thirds of one element, (as of water) to one third of another element (as of land); and then both together to make but one third of the picture, of which the two other thirds should go for the sky and aerial perspectives. This rule would likewise apply in breaking a length of wall, or any other too great continuation of line that it may be found necessary to break by crossing or hiding it with some other object : In short, in applying this invention, generally speaking, or to any other case, whether of light, shade, form, or color, I have found the ratio of about two thirds to one third, or of one to two, a much better and and more harmonizing proportion, than the precise formal half, the two-far-extending four-fifths—and, in short, than any other proportion whatever. I should think myself honored by the opinion of any gentleman on this point; but until I shall by better informed, shall conclude this general proportion of two and one to be the most pictoresque medium in all cases of breaking or otherwise qualifying straight lines and masses and groupes [sic], as Hogarth's line is agreed to be the most beautiful, (or, in other words, the most pictoresque) medium of curves.

* Reynolds's Annot. on Du Fresnoy. [ed. Which, by the way, does not mention thirds, or for that matter numbers at all]

It appears that Smith at least believes himself to be coining the phrase, and I can't find any earlier references (and, he does generally reference other works when he refers to them, as he does Sir Joshua Reynolds's essay).

The golden ratio is not mentioned at all, so the idea appears to be derived independently of that, not an intentional simplification. This is not surprising, as 1797 predates the 19th-century naming of the golden ratio and its subsequent popularization as an aesthetic construct. One of course could argue that it is the inherent power of that ratio which unknowingly lead Smith to a "slightly-off" conclusion. It's hard to back that up with facts either way, so it must be left as a matter of faith. In any case, Smith certainly argues that a ratio of ⅔ : ⅓ is "much better and and more harmonizing" than "any other proportion whatever".

Of course, Smith also doesn't provide much argument for his chosen proportion, simply declaring it to be the best. He says that an even split is too static, and a four-fifths division too strong, but doesn't appear to have any real basis for this particular number. It would be interesting to know what would happen if one of the "gentlemen" he speaks of would have explained the golden ratio to him; perhaps he would have been swayed. Ah, for a time machine.

It's also interesting to note that Smith's version of the rule is much more general than the one in common use today: he initially applies it to division of areas within the total frame, but goes on to claim it as the best way to divide any line, group, or mass. That application certainly does not seem to have caught on. On the other hand, he does not mention at all the idea of attaching special power to the intersection of the frame's third-lines.

(And, if you're interested, the mentioned "Hogarth's line" is explained in this article — it is a certain S shape, which I agree does look quite nice.)

The rule of thirds suggest that you should divide the image area into a 3x3 grid, and then position compositional elements of the image along the lines between those cells, preferably where vertical and horizontal lines meet:

The rule of thirds is a simplification of the golden ratio.

The idea is that an image will be more pleasing to the eye if important elements of the image is positioned according to this rule, rather than positioned in the center of an image.

Of course, it's just a rule of thumb and as such should not be followed blindly. Sometimes breaking it and positioning the subject extremely far out towards an edge or corner or even in the center of the image lead to a stronger composition.

Not the answer you're looking for? Browse other questions tagged composition composition-basics rule-of-thirds or ask your own question.

0
Is this a good example of "Rule of Thirds"?
69
What is the 'Golden Ratio' and why is it better than the 'Rule of Thirds?'
26
What are your photography tips for people who are casual photographers?
31
Why would I want to select an autofocus point?
45
What does it mean for a photograph to be "high key"?
33
What is the 'Diagonal Method' and should I use it instead of 'The Rule of Thirds?'
18
What does it mean when something is "distracting"?
28
What is Bakker's Saddle?
20
What things should one take into account when looking at cropping a photo?
13
How do I take a good portrait for a CV or resume?
See more linked questions