Why does flash exposure compensation of 4EV have such an unnoticeable effect?

I took two photos, one with flash exposure compensation set to -2EV: 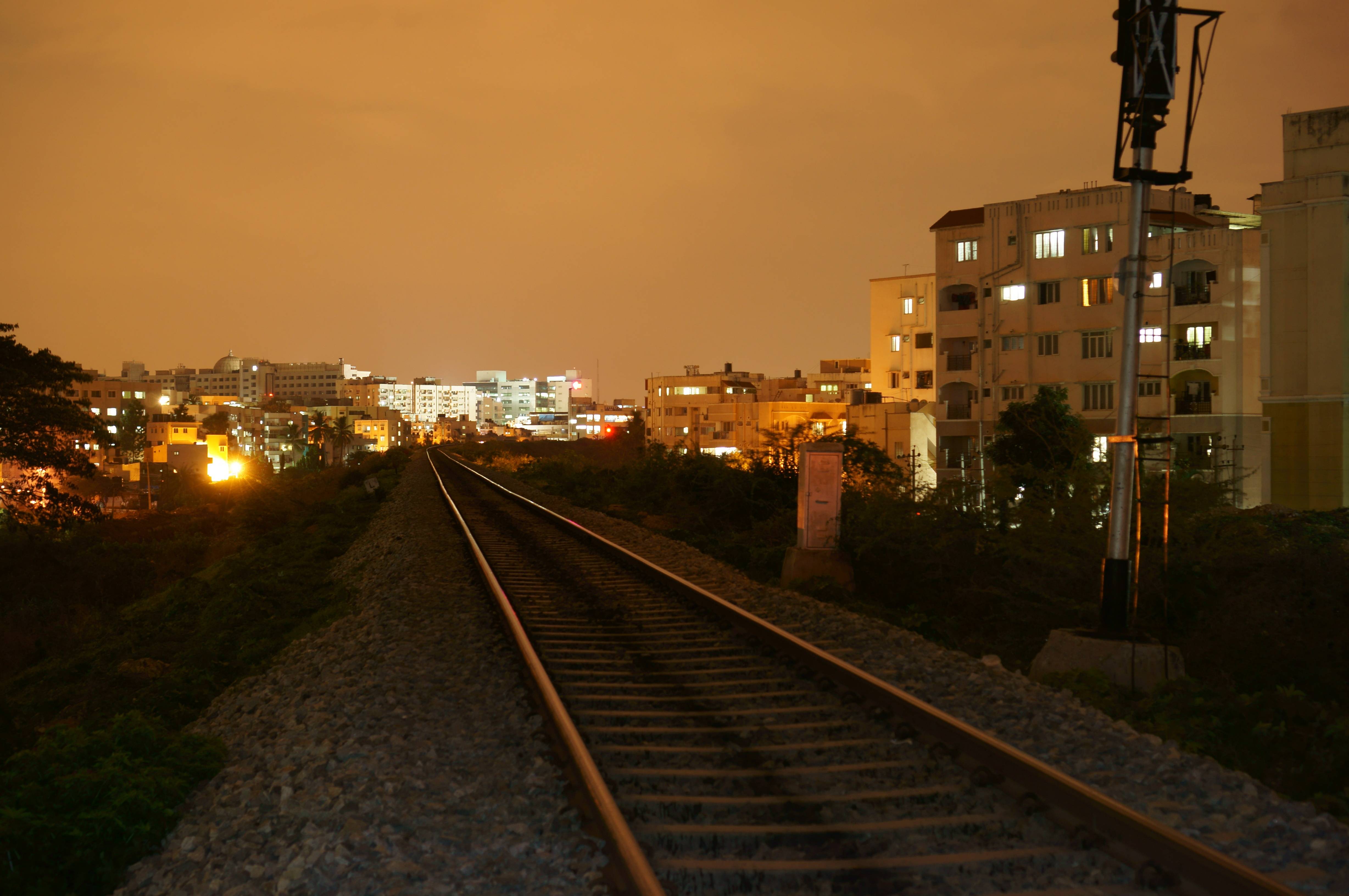 and the other with +2EV: 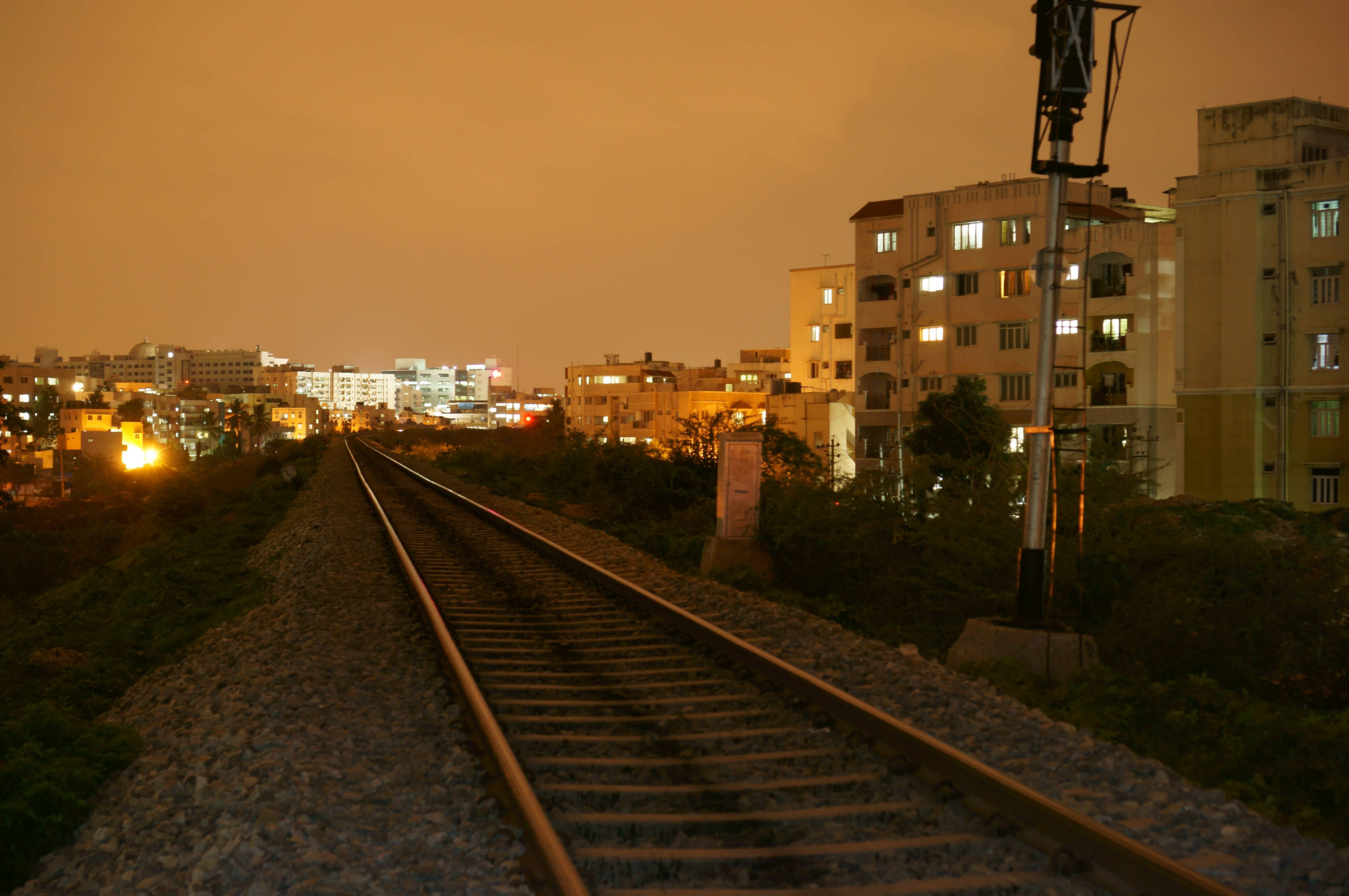 Compare these with a photo without flash: 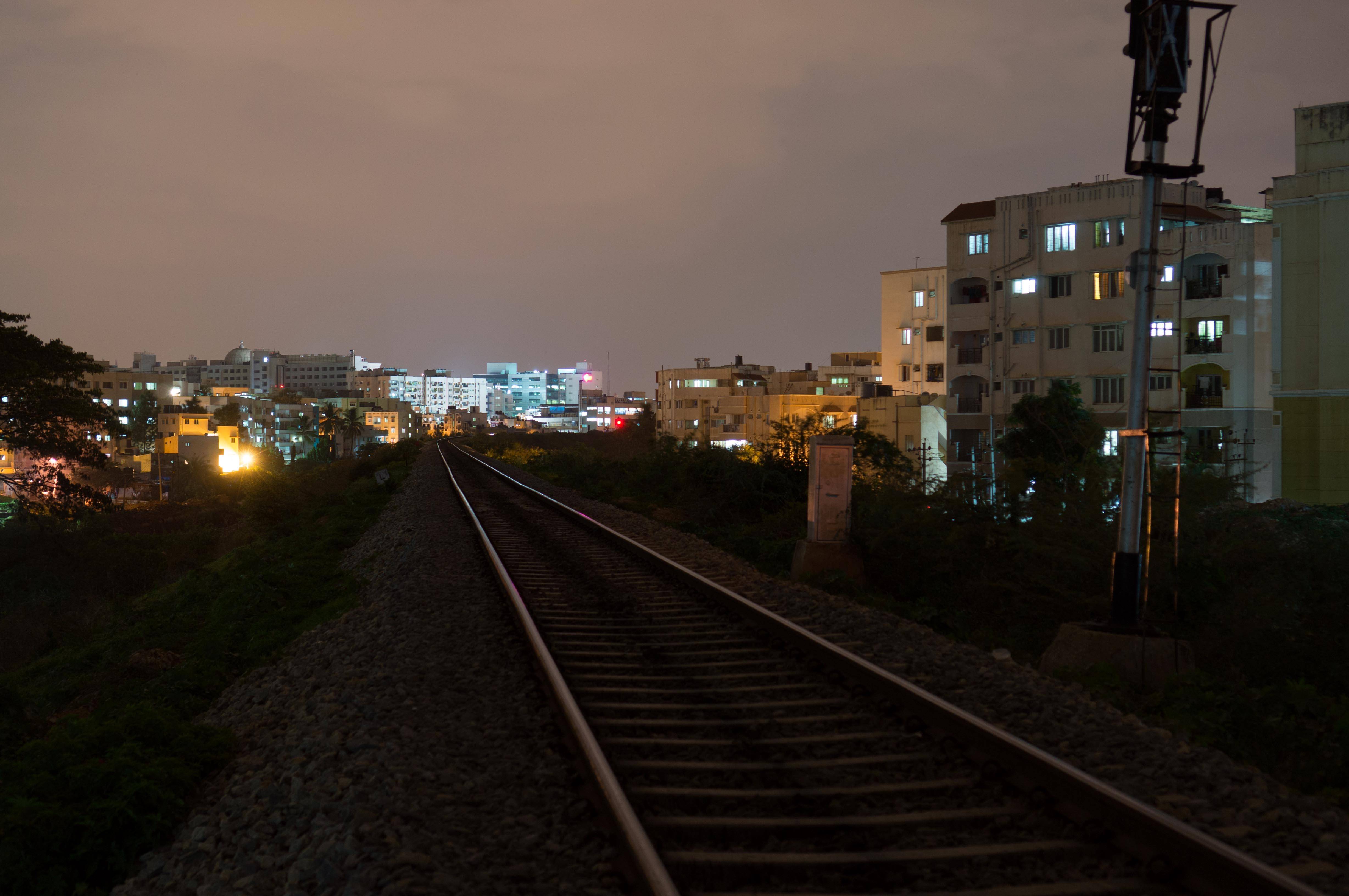 This is on the Sony NEX-5R, with the bundled flash attachment, with the same flash mode (slow sync), exposure compensation (0EV), aperture (F3.2), ISO (200) and other settings. These photos were shot in aperture priority mode.

The brightness of the light from your flash falls off with the square of the distance to the subject. For example, if you are using only flash for illumination and something 10 feet away is exposed properly, then something 20 feet away will be 2 f-stops (4x) darker. Something only 100 feet away will be 100 times (almost 7 f-stops) darker.

Conversely, the power of a flash to properly illuminate objects goes up with the square of the distance to them. Camera flashes will have limited power due to needing to be portable, running off of batteries, and not costing a fortune. As a result, camera flashes are only useful for nearby objects, ususally up to a few 10s of feet. For example, using the flash in your point and shoot camera from the stands of a sports stadium to take a picture of something on the field is totally silly. Just because people do it doesn't mean it's a good idea.

Your case is like the sports stadium. Most everything in the picture is so far away that the flash has no effect on it. Regardless of the flash brightness compensation you used, all the light for these pictures was ambient. The flash had nothing to do with any of them, which is why changing its brightness a few f-stops either way didn't matter.

You can see that the flash had no effect by looking at the foreground at the bottom of the picture. If the flash had any visible effect, you'd find it there. The foreground would look brighter than distant objects. This is not the case, so the light from the flash was already so dim as to not matter at the distance of the foreground.

The reason the flash pictures look different from the last picture taken without a flash is how your camera handles color balance. Flash is "white" light, fairly close to sunlight in color. However, most artificial lights are considerably more yellow and orange. When using a flash, the camera assumed the scene would be lit by the flash and applied color compenstation accordingly. However, your scene was in reality lit by yellow artificial light, so you can see the obvious yellow cast. For the bottom picture, your camera apparently has a way to measure the ambient light color, and it adjusted the color balance accordingly. As a result, the colors look more correct relative to how your eyes perceived them at the time. Your eyes and brain have rather sophisticated color compenstation built in, so what you perceived was already adjusted to the ambient light color.

This also points out another problem, which is that you are not working with the raw data in post processing. No compenstation is applied to the raw data, so all the pictures would have the same color cast in raw. Cameras often put additional information, like the measured ambient color, into raw files, which some software may use as the default color compensation. If you are using raw, then perhaps you are seeing the different color balance due to the software defaults. In that case you can go and set them all to something of your chosing. One way to do this is to find something in the picture you know should be white, then tell the software to set the color balance so that it comes out white (or some shade of neutral gray). The building at the right would be something to start with, for example.

To prove the points above, here are your second (+2 EV flash) and third (ambient) pictures post-processed to the same color balance and exposure. I used a patch of flat wall on one of the buildings at right as the reference for white and as the common exposure point for both pictures. 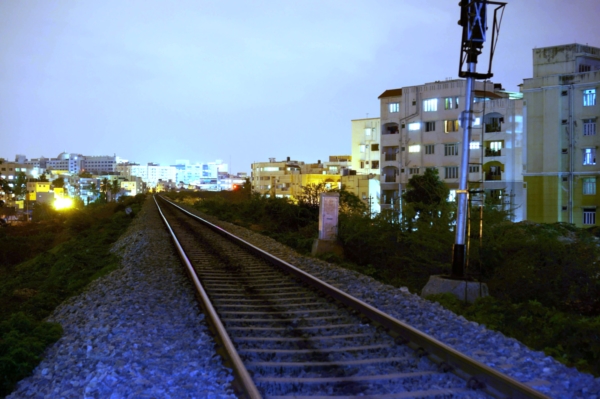 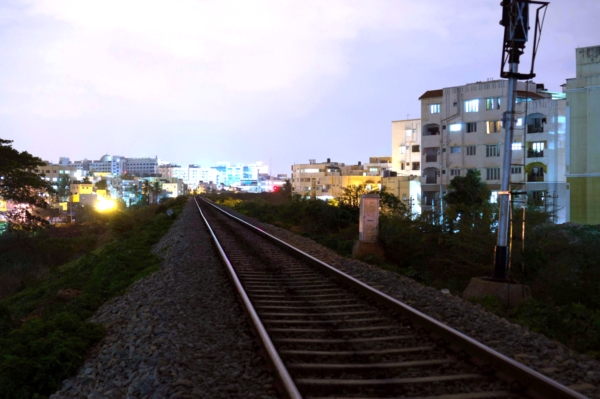 Now you can actually see a little effect from the flash in the first picture. This was previously swamped by the dark exposure and the yellow color cast. There are two important things to notice:

The square law is a powerful effect you can't escape. Even if your flash was 4 times more powerful, its effect would only extend twice as far into the scene, which still wouldn't make any difference for anything but a little further along the railroad track.

your 3 images are al expected. Your flash is very little impact. You see impact on the metal pole to the right and the ground in front of you (look at the lower left). Your flash tells your cameras it near daylight 5500K WB) so it sets that WB. In both images with flash. The ground in the bottom and the right metal pole has a nice color with that WB but the rest which is untouched by your flash is yellowish. With a cold WB tends to get with a warmer setting. The -2EV has a shorter span of good WB in teh ground. the reach is shorter.

The last image uses a better WB for the entire frame, because it is more consistent. The lower part has the same type of light and the pole as better integrated in the frame.

Even if I try to mimick the WB in teh last iamge to match the 2 flash photos better, you see more uniform response, and the ground closest to you is still yellow, and hte pole to teh right is more integrated in the shot (doesnt stand out unnaturally), while in the flash images your closer ground gets brighter and more bluish and the pole shine up. 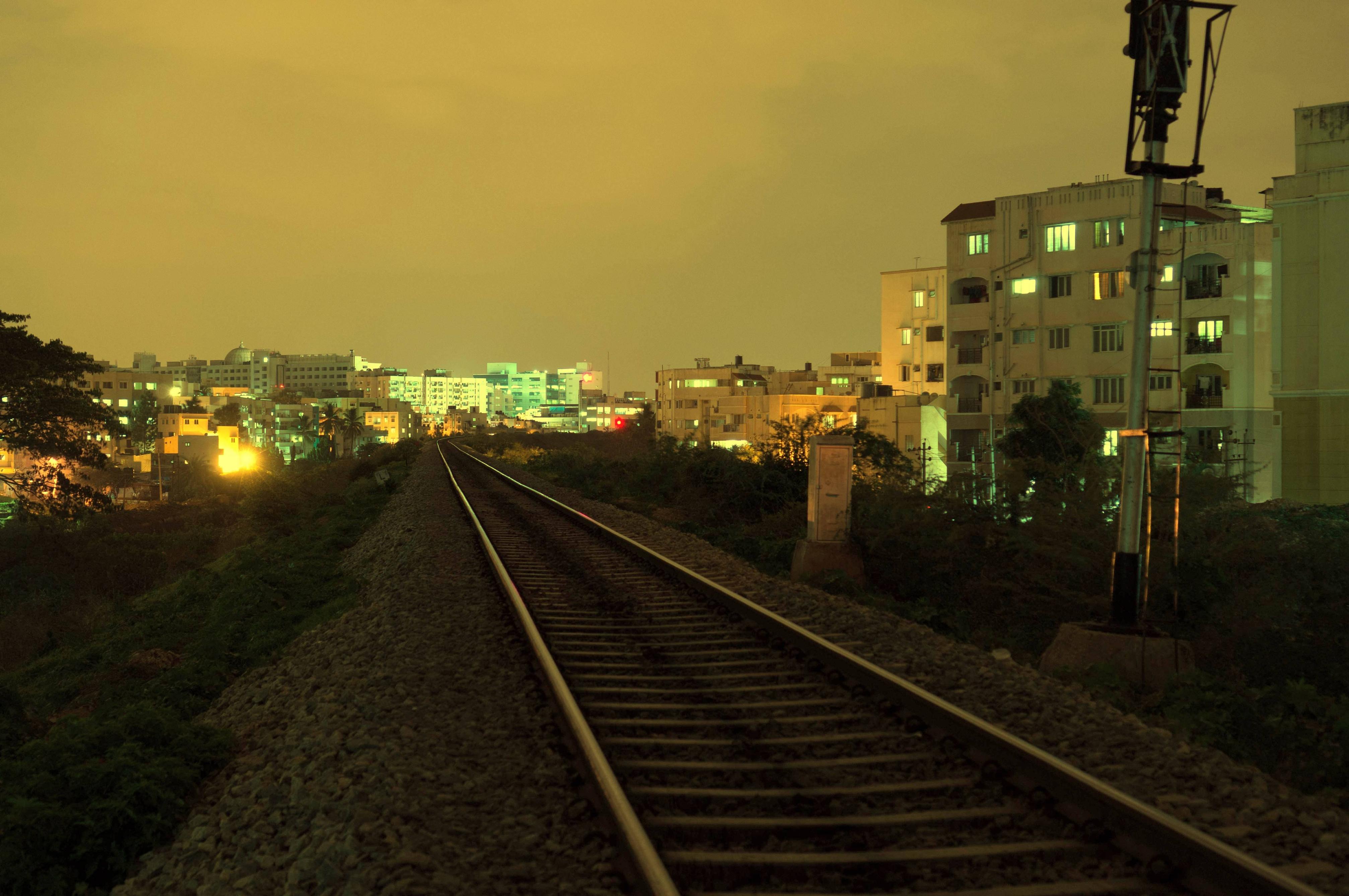 With an exposure time of 5 seconds, with the amount of light being gathered, the relatively far distance of almost all subjects, and the relative weakness of the flash used, I would expect there to be very little difference.

The difference between photos 1 & 2, and photo 3 is the white balance.

Not the answer you're looking for? Browse other questions tagged flash sony-nex exposure-compensation or ask your own question.

1
Why does using the flash mess up the white balance?

4
Why does my Canon 60D sometimes lengthen exposure when using the flash?
8
How does TTL flash work in manual exposure mode?
6
What is the relation between shutter speed and exposure compensation in aperture priority?
1
Should adjusting Flash Compensation automatically adjust Exposure Compensation in Aperture Priority mode?
1
Why does using the flash mess up the white balance?
0
What's the relationship between flash modes and flash power on the Sony NEX cameras?
5
Why does exposure vary subtly between P, A and S modes, when the flash is on?
3
Why don't semi-automatic modes on a DSLR take flash into account when calculating exposure?
13
Why does flash make a brass subject look grey?