I have been shooting (small) live concerts with poor env. lightning for some years now with the help of F/1.4 & 2.8 lenses, mostly using a 160th shutter speed to make sure that the fast movements of the musicians are not giving me blurred shots. I also stop the camera down by one stop. I left aperture and ISO automatic and got (IMHO) nice results.

Here are the original, and the corrected white balance. 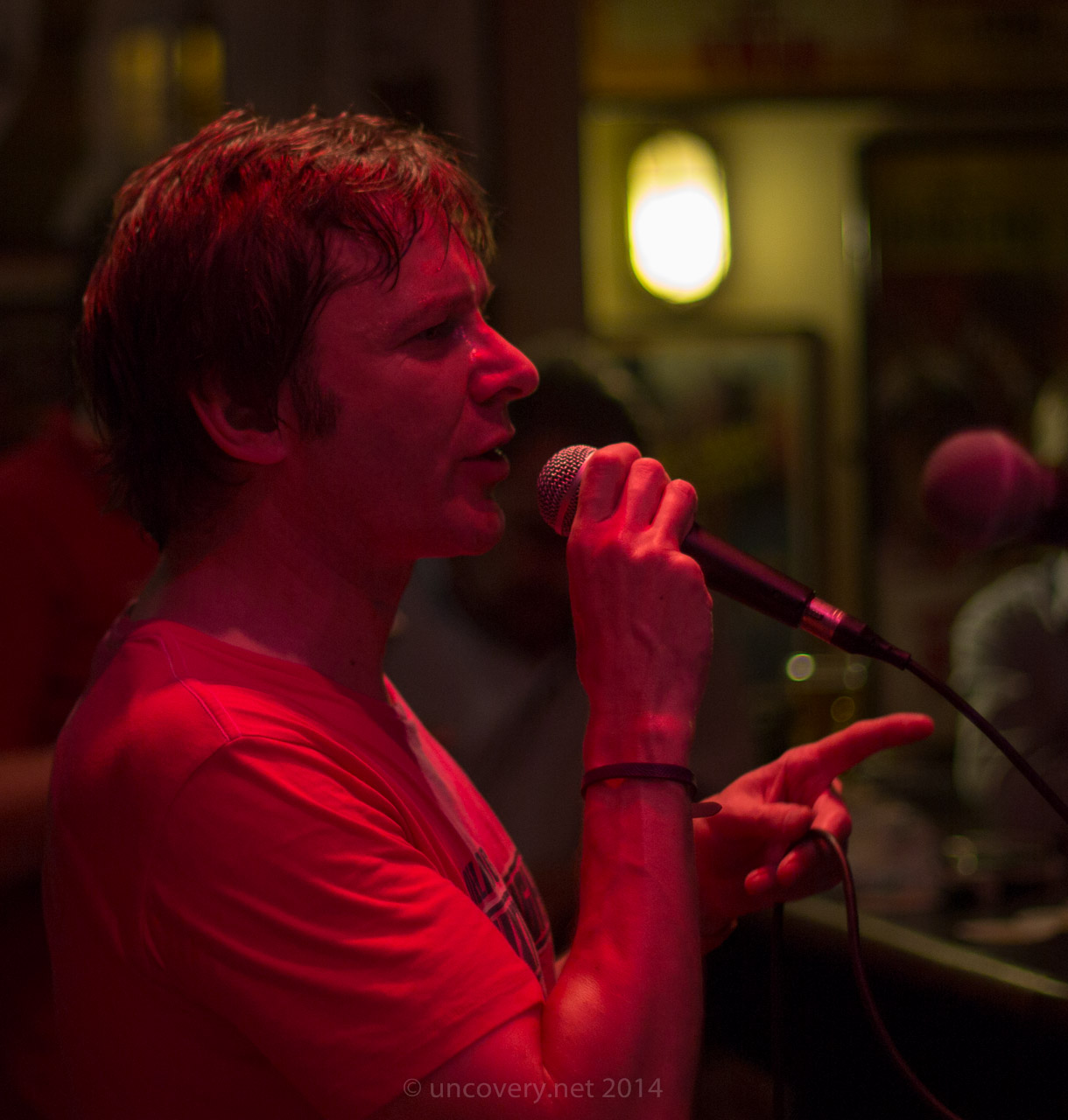 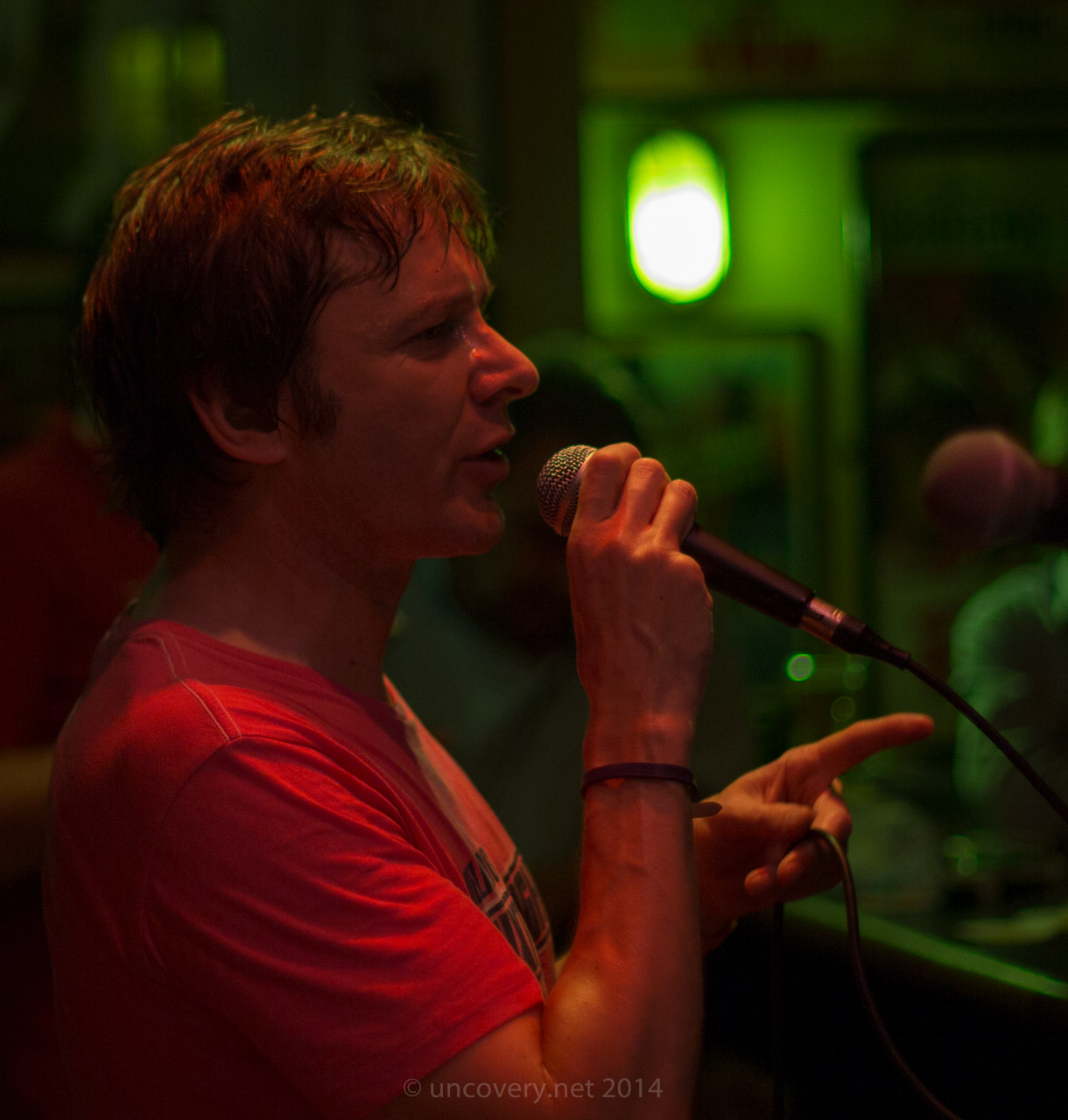 The issue is however that the lightning in the locations had too strong color accents, mostly red. I did white-balance correction (using Lightroom) on the photo afterwards but I want to still have less red in the shot since the white balance turns yellow too much into green. So I though I use a flash to be able to neutralize the color somewhat. I am very inexperienced with flash photography and want to find the right way to achieve the following:

I have now seen this video and thought I can use the advice in reverse to preserve color instead of getting rid of it: By using a slow (lower than sync) shutter speed, I could make part of the red go away, but now I am afraid it will blur the picture too much.

So is there any best practice to add some flash into an image to alter the colors more towards white light? How do I control this while still keeping the image sharp? I know I cannot shoot with even an 80th of a second...

I'd like to see the "greenish" version of the photo. Could you please use a WB pick-up tool on the white letter "C" in the background (or whatever the figure is, looks like a C..) and then add the resulting photo here.

In case it is not clear, adjusting whitebalance has to be done in a RAW converter software like Lightroom or RAWTherapee or suchlike, not in an image editing software like Photoshop (if there is a WB pick-up tool in Photoshop even, I wouldn't know;)

However, I did try a tune-up in GIMP for what little can be done to colors after a photo has been converted into a JPEG image. The guitar player seems to have a white T-shirt on. I tried to turn it from dirty reddish white to cleaner white, and see what effect this has on the whole image. I think it is still clear to everyone that there is red lights out there. 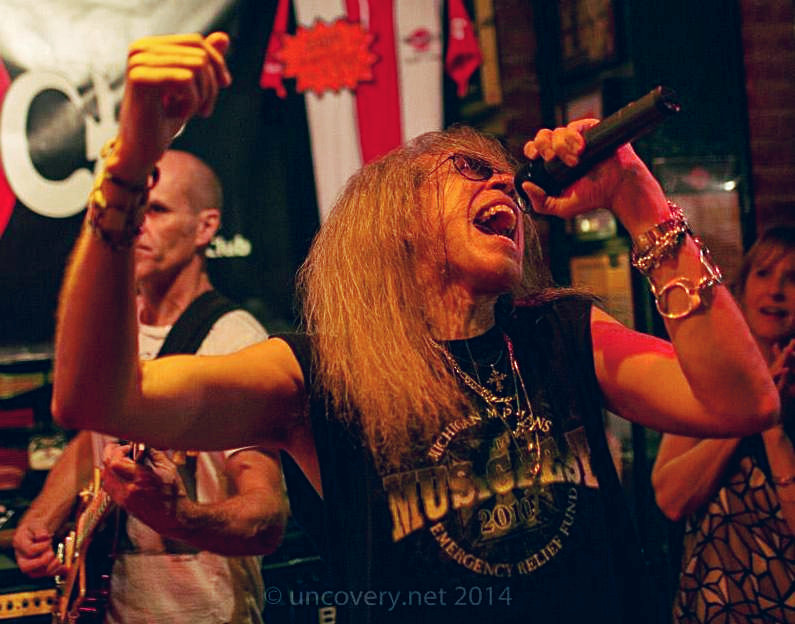 Therefore, the solution to your problem could well lie in post-processing, not so much in your camera settings. Perhaps try to forget the -1 EC, so you could avoid brightening a too dark photo in post. A flash can do miracles sometimes, but the band on stage might not like it too much, and you would also like to avoid the dust and fiber flying in the air, as a flash makes it very visible in a photo.

You can't effectively use white balance tweaks or filtering to account for true colored lighting. A color filter is going to block all other colors of light, so there's no other color information to adjust. For example, in your photo, the red filter is blocking out green and blue light. When you try to adjust the white balance to make the image cooler, there's no green/blue color information to boost, so the adjustment isn't particularly effective and ends up looking unnatural.

The best solution, in my opinion, is to embrace the colored lighting and try to use it for good effect. Boost saturation and go for intense colors instead of natural skin tones. Use color to capture the excitement and atmosphere of a live performance. If you try to compensate for it with alternative lighting or post-production adjustments, the result will probably look even more unnatural than stage lighting.

If you want to give some of your photos a different look, you could try converting to black and white. That will solve your color problems entirely, but may not really be what you want.

As a side note, a bright flash can be very distracting to performers and their audience during a performance. I'd suggest you avoid it if at all possible.

It won't really differ from traditional flash usage. My recommendation would be to get a powerful flash that will have enough power and then use either shutter speed or flash exposure compensation to achieve the desired balance of color.

Most decent flashes can reduce to as low as 1/128th of full power.

Uncovery - For future sessions at the clubs, I recommend using a Gray Card. Almost every camera store as them. You can add this technique as one more tool to some of the tricks & techniques in the prior answers.

You can do two things with the card.

1) You can hold the card in the light you plan to use, fill your camera frame with the card, and then adjust you Custom Whitebalance based on the light reflecting off of that card. You may want to pick up a larger card for this method - it's easier to hold in the ambient light and fill the frame.

2) Separately, you can use that aforementioned shot as your neutral reference in post processing. Or, take a shot of the card with your current WB settings and use the shot as your WB reference. Note that you can shoot it with your ambient plus flash lighting.

The key is that you have a genuinely neutral reference.

Not the answer you're looking for? Browse other questions tagged flash low-light white-balance concert or ask your own question.

11
Using flash with Aperture Priority or Shutter Priority gives me a white image - why?
3
Hotshoe flash with adaptable color temperature?
1
Why does using the flash mess up the white balance?
2
Problem in white balancing photographs taken in sun
1
How do I reduce a smartphone flash's power?
1
What white balance should be selected if the photo is supposed to completely surround the viewer?
2
How do I find the right white balance value to set in my camera?
1
Why does the green gain affect the blue and red values on a CMOS sensor with individual gain control?
1
Why do pure colors (red/green/blue) become a mixture of colors when converting raw?
3
Can't get the right colors when shooting art. Looks pale even with ColorChecker Passport