How to change aperture in manual mode on an entry-level Nikon SLR?

In manual mode on my Nikon D3200 I cannot change just the f/stop setting. It only changes in relation to the other settings. How can I reproduce settings that I have found in books on photography if I cannot adjust the f/stop separately? Is this something I'm doing wrong or is it a fault with the camera?

You're almost certainly doing something wrong. If you're truly in manual mode - i.e. the mode dial is set to the "M" position - then the aperture won't (normally) change in response to other settings. You change the shutter speed by turning the command dial normally, and you change the aperture by holding down the exposure compensation button (the "+/-" button just backwards and right of the shutter button) and turning the command dial. If that doesn't happen, try finding an experienced SLR user and asking them to try. If they can't get it to work, then's the time to start thinking there may be an issue with the camera.

The only situation I can immediately think of where changing other settings would change the aperture is zooming in on a variable aperture lens - for example, if you have a standard 18-55mm f/3.5-5.6 kit lens set at 18mm, f/3.5 and then zoom in to 55mm, the aperture will change to f/5.6 as it's limited by the lens.

Using Manual Mode (M in front of the white label in (1) ), turn the dial wheel (27) while pressing the Aperture selector (4) 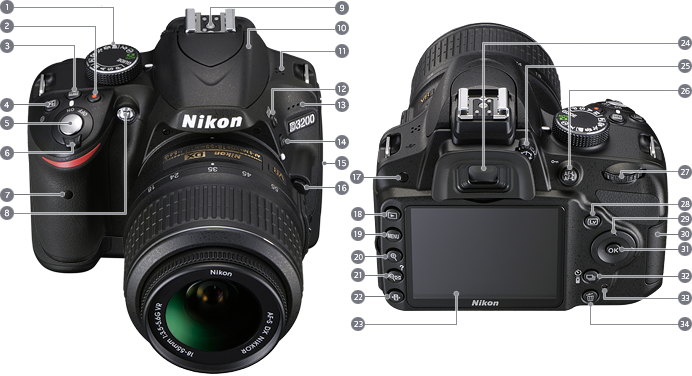 You will need to be in "M" mode on the main control dial.. Then you can set the aperture (f/stop), shutter speed, and ISO completely independently of each other. Important to note though that any under or over exposure is therefore your issue for you to sort out. The camera is NOT making any decisions about exposure when in "M" mode.

In the D3200, the aperture cannot be changed while in live mode. All the above applies as long as the camera is not in live mode.

If you want to change the aperture number do this. Choose the Manual mode and push and hold the 4 button [ the button <4> +/- near the info button ] and keeping this down turn the number <27> turning wheel and see the results. This works perfectly in Live but and in viwfinder.

I was having the same issues - finally got it right! Use Manual, then press the +/- (number 4 in the picture) and turn the dial wheel - it works... Common mistake is confounding the aperture button at the bottom left of the shutter button (number 5 in the picture)

I just discovered for myself that I am unable to manually change the aperture in manual mode if taking photos using the LCD screen as the viewfinder. When I switched it back to the standard viewfinder, and hit the information button on the bottom left, I was able to control everything as normal again.

You must set up in manual, then switch back to aperture mode to change the aperture. When you go back into manual the aperture adjustments will show up. You can not do it in manual mode and must go back and forth.

Not the answer you're looking for? Browse other questions tagged aperture camera-settings manual-mode nikon-d3200 or ask your own question.