How do I get this 'glare' effect?

I have been staring at this Apple Image & trying to figure out how to get this glare effect (which can be seen on the monitor). 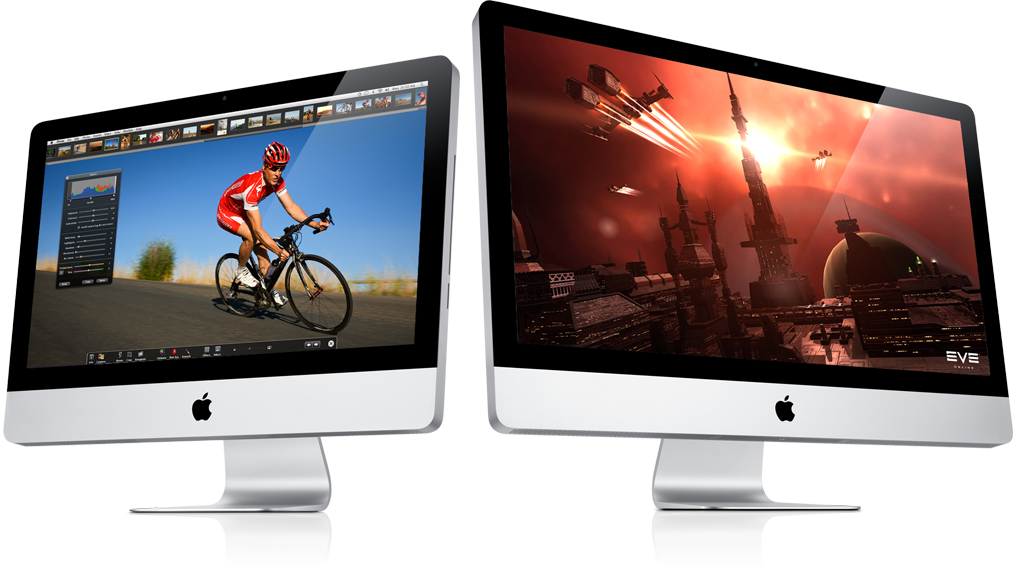 The glare effect on the monitor itself is a digitized effect, it is not real. Technically speaking, it is near impossible to get a clear photograph of a computer screen with the image it is displaying like you can see in that Apple example. What is generally done is a photograph of the screen(s) are taken while they are off, and the images that are supposedly being displayed on the screens, as well as the highlights, are added using Photoshop.

It may be possible to get something similar to that using a very carefully crafted lighting setup, however it is highly doubtful that you would ever get such a clean highlight with such a crisp edge. Highlights in reality are reflections (usually specular) of light sources, so a rectangular light source with just the right shape and brightness would be necessary to generate a highlight like that.

I don't do much in the way of still object photography myself, I've only observed it being done. I have, however, done quite a bit of graphic design work, and the effect is a breeze to do using photoshop and a stock photo of a monitor (or monitors) All it really takes is a screen shot of the image you want the monitor to be displaying scaled, skewed, and rotated to fit the screen, and a translucent white gradient drawn at the appropriate angle.

You just use a gradient in Photoshop.

It's impossible to get a glare like that in a photograph, as the border of the screen and the screen area have different reflexive properties. The person that put the glare on those images didn't account for that, which is why the glare doesn't look real.

How it's done in Photoshop

A "layer" is created with a white gradient that goes from an opacity of nearly 100% to 0%. That gradient is done at the 2 o'clock angle you see.

Then the layer is masked and a gradient is applied on top that makes it fade opacity from top-to-bottom starting at about midway (if you notice the bottom is more transparent than the top).

Finally, this layer is laid over a screenshot made on the computer that was shifted and layered onto a photo of an actual computer.

The highlight simulates something that used to happen in professional photo studios, although the photographer would generally try to minimize the effect. It's glare from a lighting element called a "softbox". It is designed to cast a soft light, lots of ambient light and undefined shadows. What you see is a reflection of the actual softbox.

Skeumorphism is the term that describes artificially including real-world or obsolete elements into design like this.

Take a look at both screens in the example image. It doesn't feel quite right, does it? That's because the designer has made a mistake. Even though the monitors are at different angles, the highlights are in at exactly the same spot and at the same angle. If you could super-impose both images, you would see they are identical. The eye catches this tiny mistake and you get that unrealistic feeling. Regardless this is...

I saw a great behind the scenes video from a product photographer hired to shoot similar images of the iPod Touch but I can't seem to find it now.

Anyway, you can never say for definite, but it's really hard to get a crisp clean highlight like that with a softbox, and really easy to do in Photoshop with an adjustment layer, so I'm going to go with the latter option. Just mask off the relevant area of the screen and apply a levels or HSL adjustment layer.

In your left hand image, for example, locate the card off to the left and slightly above the monitor. Illuminate it with a hard focused light from the right. If necessary block part of this illumination so the monitor itself lies within its shadow. This setup is not difficult or time-consuming to accomplish: you're not really worried much about matching this extra light's color with the ambient light, so it could be almost anything--a desk lamp even--and the only equipment you need is a stand and tape to hold the card (or a helper).

This technique and many other general principles of lighting are clearly explained and illustrated in Hunter & Fuqua's Light: Science & Magic book.

In PSD create a new layer on top of the image with the style set as 1% stroke and )% Opacity. then on your layer remove the stroke. Then you can use a layer style> gradient> white to clear> ANGLE> low opacity. I used this when I had to create a vector image of what a picture in a frame would like and placing it on top of a real image of a bedroom wall. Worked real well. That is how you get the glare effect. Your welcome

Not the answer you're looking for? Browse other questions tagged post-processing product-photography image-manipulation glare or ask your own question.

2
How does a glare arise in images?
5
How do I photograph water without catching glare from sun?
5
What is this effect called and how can I post process my photos to get this effect?
2
Does the anti-glare coating on the DELL U2711 interfere with its use for photo editing and review?
4
How can I achieve this "golden" effect?
0
how to achieve this washed out processing effect
3
Avoiding glare from wooden picture frames
5
How can I figure out source of reflections causing glare?