How to improve sky's saturation and contrast to get a similar result?

Have a look at these two pictures: 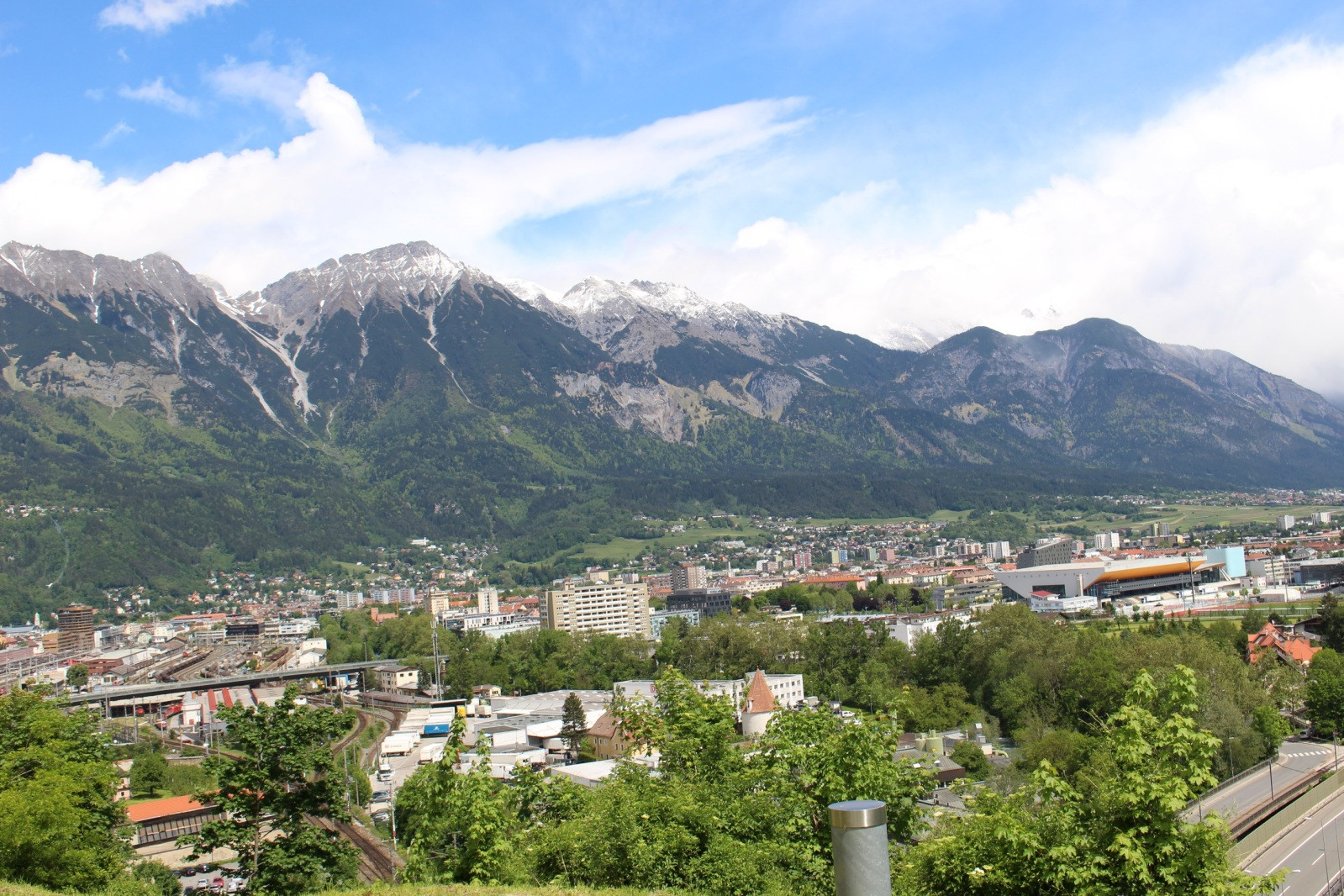 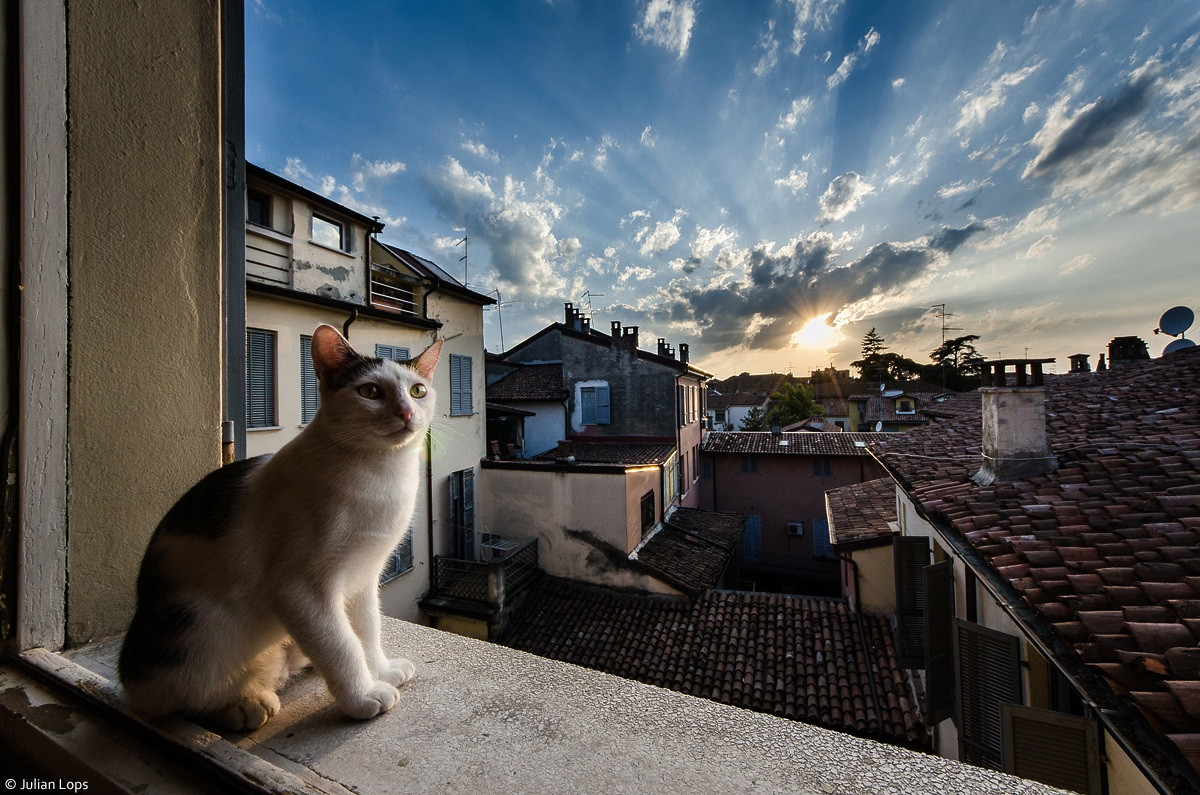 The first is mine, but is so...flat. (You can find the original here.) I took my photo with a Canon EOS 100D, while the second was taken with a Nikon. I cannot believe that Nikon is so much better than Canon in the dynamic range handling, so I guess the second has been retouched.

How should I retouch the first one? Is there software to improve the sky?

There are a number of things you can do in post processing, including using HDR or using blended exposures. I think it's likely that something like that has been done in the example you give, because there's going to be a lot of natural dynamic range in a scene which includes both the sun in the frame and the shaded side of a building with no apparent light source.

Most of these post-processing techniques work best if you have the image in RAW, and best of all if you actually have a bracketed series. If you just have a JPEG, it you have less flexibility to work.

But the easiest trick for dramatic skies is to use a polarizing filter. These allow only light of a certain orientation through. They're made so they rotate in place, so turn until it's aligned with the sun — you'll see the dramatic effect in the viewfinder.

Take a look at this series of questions about polarizing filters for more:

and also What is the difference between a linear and a circular polarizer? on the issue of circular vs. linear (which, although the name may seem otherwise, has nothing to do with with whether the filter rotates or not).

You also have to watch the light, an done position of the sun. The low angle of the sunset is naturally impressive, while mid-day light is harsh and hard to work with. I think you might also find Why do breathtaking views turn into "boring" photos, and how can I do better? and the excellent answers there helpful.

In general, I see that you know that the secret to good photos isn't the camera brand or model. But it's also not about after-the-fact software effects. From this and a few of your previous questions, it seems like you have a lot of interest improving your photography. We can answer a lot of questions here, but I also have a book recommendation. There are a lot of technical books on the knobs and dials of photography, but I don't think that's what you need. Instead, take a look at Capturing Light: The Heart of Photography by Michael Freeman, or The Photographer's Eye and others in that series by the same author. These books emphasize mental process for making photographs, and if you have that, you can figure out the technical.

The single easiest, most effective thing you could do is shoot raw. (I assume you didn't because you describe the linked JPEG as "the original.") Raw gives you the dynamic range you need to bring the sky brightness down out of the white-clipping range. 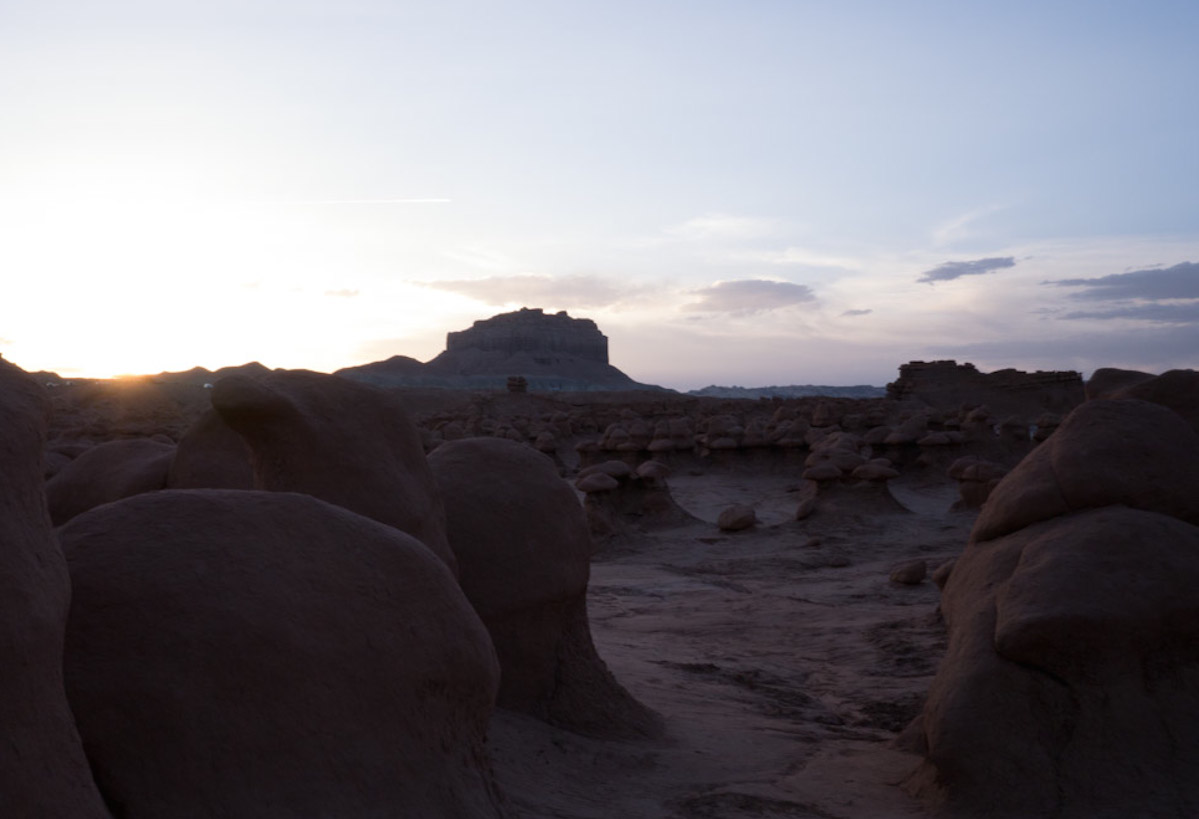 Like your cat picture example, this was shot straight into the sun with the sun low on the horizon. It was shot with a Panasonic DMC-GX1, which probably doesn't have as much inherent dynamic range as your Canon 100D. Yet, with a fair bit of exposure pushing and pulling in Lightroom, voilà: 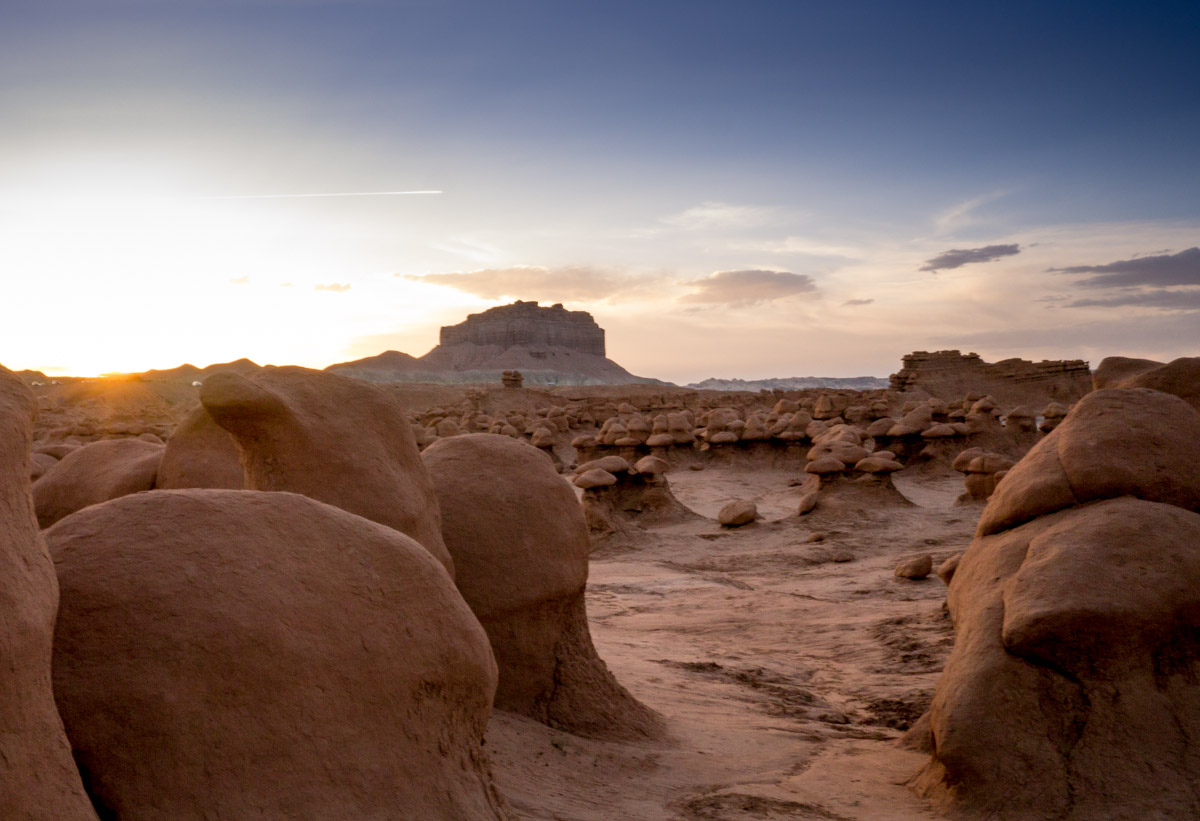 As you can see, I've still lost the sun's disc in the flare. To get the extreme effect as in the cat picture without any kind of exposure blending (manual or HDR), you need to start with either a lot more dynamic range in the exposure or an even more under-exposed shot.

Given the relative camera specs (Canon 100D vs Nikon D7000) I don't think the cat photographer was working with any more dynamic range than is available to you. You just have to tell the camera to save it all by shooting raw, then make use of it with a raw processor. Lightroom is just one of several suitable programs.

Your mountain pic is nowhere near as difficult a scene as either my Goblin Valley pic or the cat pic. It may well be that only a polarizer is required.

Here's what a polarizer can do: 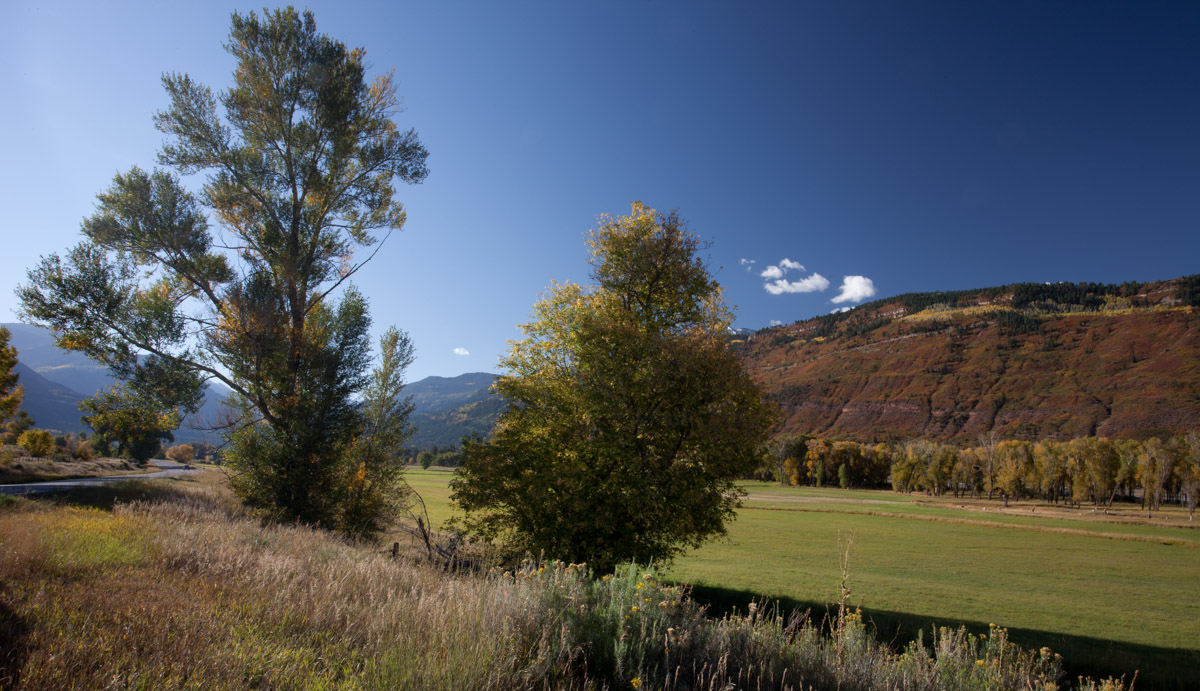 That picture was taken by a Canon camera, straight out of the camera with no exposure adjustment. You can tell it was taken with a polarizer by the sky gradient. That's a characteristic effect of a polarizer, especially with a wide-angle lens, since the effect varies with the angle between the sun and the lens axis. A polarizer's effect is strongest at 90˚ to the sun — straight left or straight right — decreasing to essentially zero when the sun is in front of the camera or behind it.

The horizontal angle of view on the lens used for this picture was about 80˚, which is why the effect varies so much from left to right. Since the effect is clearly strongest at the right edge of the frame, that means the sun must be no more than 10˚ out of the left edge of the frame.

I always shoot raw. You never know when you'll need the extra dynamic range to play with.

I also always carry a polarizer, even in my daily-carry bag which holds only 10 lbs of stuff including a tablet and small laptop.

The second image has been heavily altered to boost contrast. You can tell from how artificial the cat looks.

That said, the first image won't look as good because there is also a ton of haze in that image. The haze is obscuring detail of the sky and making it more white than blue. Circularly polarized filters help with this and may have been used in the second image as well as editing to boost contrast.

Images from Canon cameras are perfectly capable of being manipulated to look just like the sample image you provided though, you just need to make sure you are starting with an image with a good clear sky and then increase the contrast and shadows to make sure you get a really rich looking sky.

The problem with your picture is that distant objects get atmospheric haze added to them in a photograph. This shows up mostly as a elevated black level, and usually a little bluish tint. In this case, it is the black areas of the distant mountains being well above the picture's black that give the "flat" appearance you mention. To prove that, here are a few simple manipulations of your picture:

This is your original for reference: 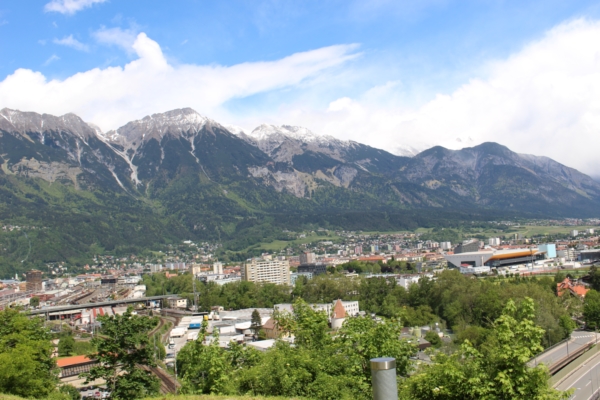 The first thing to do is to make the darkest areas black. Your black level was about 2% in the red and green channels. That's not a lot, but enough to see a small improvement if you look closely: 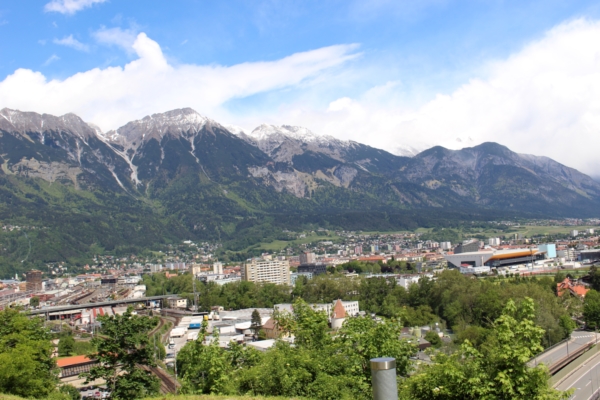 So far, no information has been lost. We've only used the available dynamic range more effectively. However, if the main point of the picture is the mountains in the back, then you need to cancel most of the haze. I did that by setting the black level to the darkest part of the background starting roughly at the base of the mountains. I also cranked up the saturation a bit: 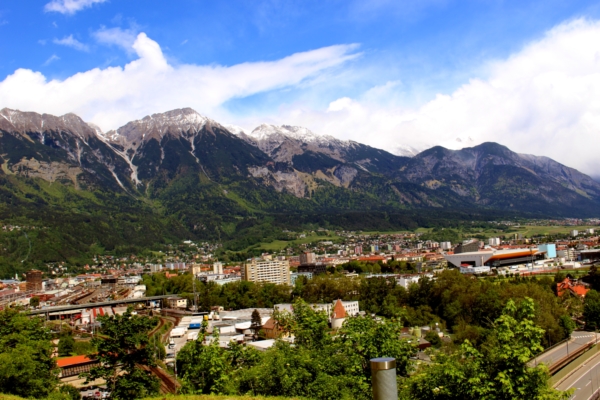 The mountains "pop" more now than in the original. In this case I applied all the effects globally, so the dark areas in the foreground have lost some information. The dark areas look more like dark splotches. Depending on what effect you are trying to achieve, this might actually be desirable. Or, by spending more time you can apply different black levels to different parts of the picture, sortof doing a HDR from just a single original.

There is lots more that could be done, but I think these manipulations show what the basic issues are well enough.

Starting with a original taken with a polarizing filter would help too.

The difference between the two photos has absolutely nothing to do with the make of the camera: the differences are the quality of the light and the editing that's been done to the cat photo.

The light in the mountain photo has been flattened out by the clouds and haze and, from the shadowing on the intruding foreground pole, seems to be pointed close to straight on to the mountains. That means it isn't casting any interesting shadows: the side of the mountains you can see is lit, and the side you can't is in shadow.

In contrast (pun unintended but appropriate), the light in the cat photo is casting visible shadows (for example on the roof tiles and the cat) and the image has been quite heavily edited. If it hadn't been edited, much of what you see would be close to silhouetted.

Also, it's not what you were asking about but the mountain picture is leaning heavily to the left and it's always a good idea to check around the edges of the frame for intruding objects like that scaffolding pole.

The second image looks very HDR-ish to me, it's probably a bland of multiple exposures.

Usually you get nice detail in the sky if you set your exposure down - you get a darker sky with more details as opposed to bright washed out sky you get with the "right" exposure.

A polarizer also works great - but I don't use one myself.

Obviously, if you set your exposure for the sky everything that is not as bright as the sky (in other words, everything but the sky) will be too dark, this leaves you with two choices:

Processing absolutely played a part in the example you gave, and others have covered some of the processing techniques quite well already.

In addition to processing, though, don't forget to shoot under the right conditions -- specifically, time of day. Note the position of the sun in your reference photo: this is golden hour, when the sun's light is warmer and less harsh than during full daylight. Shooting during golden hour will give you a massive head start when you start exploring some of the processing techniques outlined here.

Not the answer you're looking for? Browse other questions tagged photo-editing or ask your own question.

103
Why do breathtaking views turn into "boring" photos, and how can I do better?
39
In which situations should I use my circular polarizing filter?
26
How do I choose a polarizer?
39
What is the difference between a linear and a circular polarizer?
15
Why is my camera so forgiving for overblown exposure when shooting in RAW?
31
How does exposure fusion work?
18
What is HDR photography?
17
How does one use circular polarizers?
8
What is bracketing?

3
How to remove flaws from multiple images?
6
How do I improve the contrast of trees in a black and white photograph?
0
Finding out what filter was used in this photo, or simple things like contrast, saturation, etc
0
Method to edit britghtness and contrast of multiple photos (each conditioned differently)
7
Why high contrast increases color saturation?
1
Picture quality when posting pictures on social media
14
Is there any proof that high saturation and contrast makes a picture more appealing in social media?
1
Why does an increase in Y' channel contrast result in apparent desaturation?
7
Saturation and contrast in photography vs video
0
How to Improve Visibility of Photos for an Article