“10 m resolution” - Expressed as screen resolution (or other way photography noob can understand)?

The X-Sat satellite captures images of Earth "with a 10 m resolution multispectral (three spectral bands in the visible and near infrared spectrum) instrument". What does this mean? Particularly, how would "10 m resolution" be expressed if it was to describe a screen resolution? Other ways of describing this resolution is also welcome.

image-quality resolution
Share
Improve this question
asked May 18 '14 at 12:29

The web page you linked uses term Spatial resolution. It is to describe the resolving power of the imaging device they have up there, i.e. the ability to separate points of an object which in this case is the surface of the Earth.

Ten meters resolution tells us that the camera located 685 kilometers above sea-level is able to tell apart objects that are 10 meters from each others. On a dark surface of a parking lot two lightcolored cars will appear as single pixel if they are closer than 10 meters to each others. More than 10 meters apart the cars will produce two pixels on the image.

What the 10 meter resolution means on your computer screen? I presume you have a wide screen display of 1920 pixels horizontal. The 10 meter resolution means that if you go "pixel peeping" the image, you will see 10 meters of Earth surface per each pixel on your display, resulting in 19,2 kilometers wide patch of ground if you view it on full screen. However they say on that wikipedia page that the imaging device is able to capture a 50 kilometer wide patch of land as the satellite moves across the sky. This you divide with 10 meters to get the horizontal resolution of the imaging sensor they have.

50 km is 50.000 meters divided by 10 meters equals 5000 pixels wide sensor. Now, that is a number we can understand easily. In real life it might not be as simple as that, but I believe this already answers your question.

In the rightmost picture you can easily see a wide river and a narrower river come together, and supposedly farmlands divided into rectangles by a crisscross of ditches, and some white blobs that are clouds. The methods and objectives are explained at http://www.eorc.jaxa.jp/ALOS/en/guide/forestmap_oct2010.htm

In its original form — and the sense used here — resolution means "the level of detail which can be resolved". That is, from its orbit, this camera can resolve individual objection the ground that are approximately 10 meters in size. This may correspond to the number and size of pixels on the sensor, but there also might be other limiting factors (such as the quality of the optics).

But the word "resolution", somewhat unfortunately, has another meaning in computer graphics. We call a screen with a lot of pixels "high resolution". That's because if the screen is the same size (and they mostly were, in the early days of computers) more more pixels lets you show more detail, and in effect more resolution in the original sense. This is the term you are familiar with, and it is basically unrelated.

We sometimes refer to the number of pixels (usually in terms of megapixels) on camera's sensor as "resolution". Another way to think of this is that each element of the complete system has its own resolution, and that each part is its own limiting factor. The lens, the sensor, the post-processing — the level of detail each can resolve puts a cap on the overall resolution. And it can go further back: stability of the platform can be a limit, whether it be a satellite spinning in orbit or a flimsy tripod. Or on the other side, once the image is captured, the display screen or printer you use is another potential bottleneck. (But in this case, I think they are just talking about the captured image regardless of display.)

In this context "10 m resolution" probably means each pixel in the satelite image ideally maps to a 10x10 meter rectangle on the ground.

This has absolutely nothing to do with "screen size", whatever that is supposed to mean, so the rest of your question can't be answered.

I work in remote sensing sciences. A good summary of the spatial resolution concept for satellite images has been done by Duveiller (2010) and completes some of the other answers:

Spatial resolution is a complex concept for which there is no single definition (Townshend, 1980). A strong simplification is often made in which spatial resolution is considered to be equivalent to the ground projection of the pixel.However, the pixel itself is not a true geographical object (Fisher, 1997) and it is often larger than what people would like it to be (Cracknell, 1998).

Earth observation by remote sensing consists in measuring a property of the planet's surface, generally the electromagnetic radiation reflected or emitted by the surface,which is characterized by a certain variability in space. The spatial heterogeneity is generally structured by various sets of objects scattered over the landscape. In remotely sensed images, these spatial structures are recognizable by the fact that their spectral properties are more homogeneous within them than between them and other scene elements (Jupp et al., 1988). The scale of spatial variation within an image relates to the size and distribution of spatial structures across the surface. Assuming some periodicity in the repetition of these structures, the surface can be described in terms of spatial frequencies. High spatial frequencies correspond to small spatial structures while small spatial frequencies characterize larger object and smoother spatial variations. The spatial resolution of an instrument relates to its ability to resolve high spatial frequencies. This capacity depends mainly on 3 characteristics of the instrument which will be described hereafter: the ground sampling distance, the modulation transfer function and the signal-to-noise ratio.

Details about this 3 features may be found in the remainder of the article.

Specifically in satellite or aerial imagery, and other remotely sensed data, "10m" resolution means that each pixel in the image raster is approximately 10m x 10m representation of the real world.

4 band multispectral image with 3 bands in the visible spectrum and one is near infra red means that the 3 bands are separate monochromatic bands (images) each representing the visible R, G and B spectrum and the 4th band image is captured at a near infra-red spectrum (approx 0.845 - 0.885 µm) which is not visible to the human eye. These bands processed in GIS software and combined to either show the image in natural colour RGB or near infra-red spectrum (Black-blue-shades of red) which is usually used in GIS to reveal and analyse vegetation and hydrology paterns. This is because in near infa-red the reflectance of vegetation types and health is more emphasized and when processed visible in varying shades of red whereas reflectance of water bodies is non vegetated areas are in the blue - black spectrum. Near Infra-Red imagery is typically used in forestry for delineating forest stands and sometimes for specie identification but also for identifying and delineating water bodies.

Some satellites, such as the new Landsat 8, collect multispectral imagery with as many as 10 multispectral bands at varying wavelength and resolution + a panchromatic (higher resolution) band which is used for sharpening band combinations of lesser resolution.

Circling back to the "10m resolution" part of your question here is an example showing SPOT 5 10m resolution multispectral satellite imagery shown in the near infra-red colour band combination. The first example shows the image displayed on a 8.5"x11" layout at a scale of 1:100,000; a scale bar shows the distance 10,000m displayed on the map.

Second example show the very same image in the same map layout displayed at a scale of 1:100; a scale bar shows the distance of 10m displayed on the map - notice the image pixle is approximately 10m across. For reference I am also showing the particals of the coordinate system used. 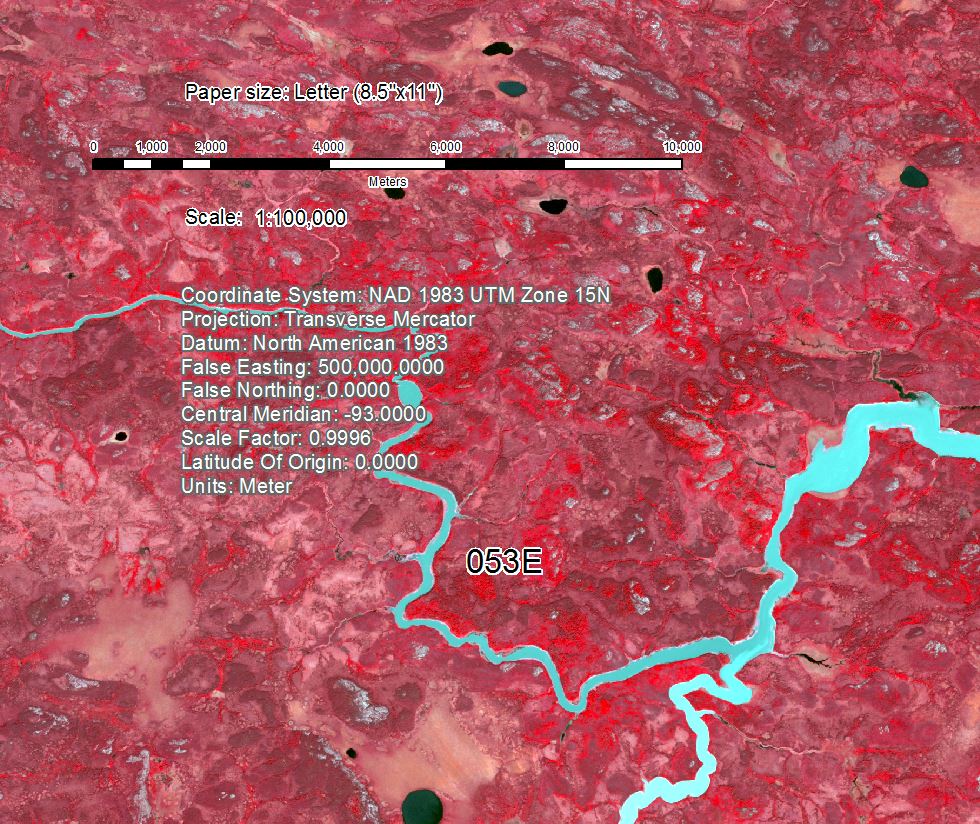 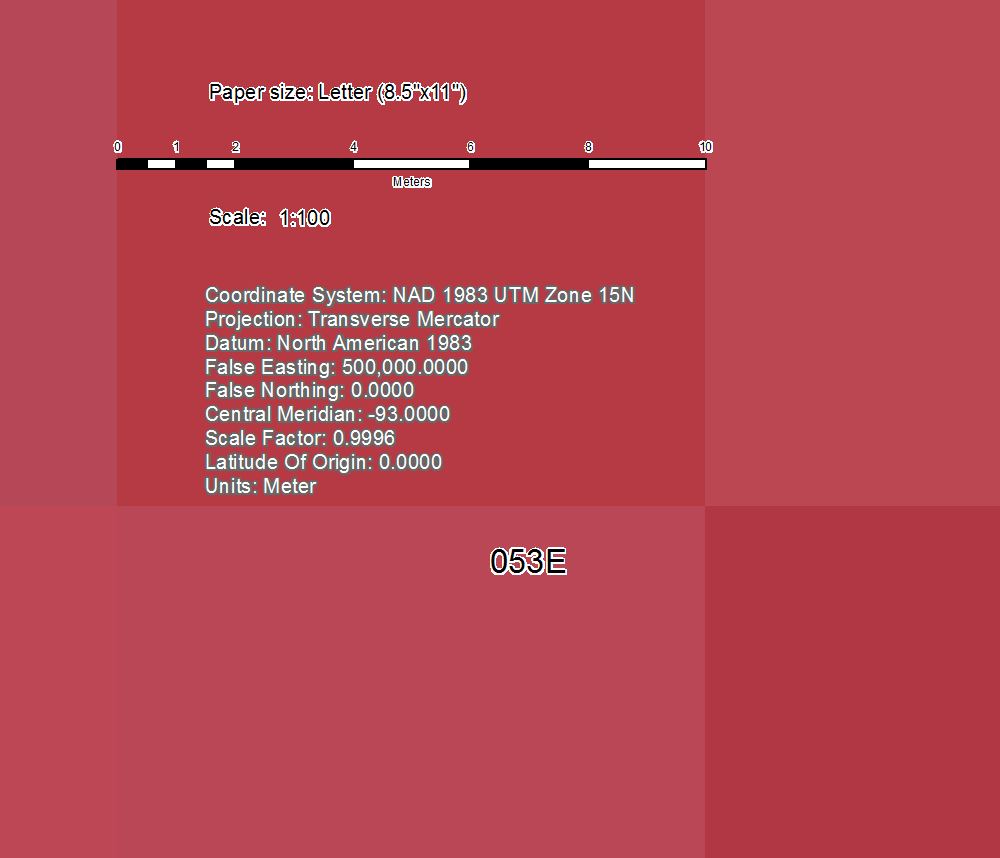 Not the answer you're looking for? Browse other questions tagged image-quality resolution or ask your own question.

26
How much “noise” is acceptable in a photograph?
13
Is there a photoshop plugin or any other piece of software that can do super resolution?
17
How can a high resolution camera matter when the output is low resolution?
6
Why is resolution more important for landscape photography?
1
What is the most honest way to cite pixel count (resolution)?
3
How viable is copy pasting a professional's settings so that a noob can produce high quality photos?
2
Photography vs videography in resolution
0
Is it possible to upgrade Canon 1100D screen to one with better resolution?
1
Can I upgrade the resolution of a camera without getting a new camera body?