Why is only right half of this photo blurred?

I took this from a moving bike. To my surprise, only right part of the image (letters) is blurred. I couldn't explain why. 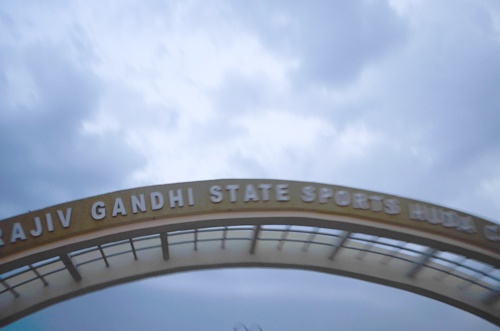 If you need, here's a bigger image with all the metadata.

This is unlikely anything to do with a broken lens. There are two things going on here.

First, you say you were moving at the time this picture was taken. Apparently you kept the lens pointed roughly at the G in GANDHI during the exposure. It therefore makes sense this part of the picture has the least amount of motion blur. Objects more distant from the center of orientation will therefore be more blurred since they go thru more apparent motion over the same small shutter time. You only notice this in the arch to to the right because the left part of the arch is closer to the center of orientation, and the rest of the picture is clouds that are by nature fuzzy and therefore difficult to tell if subjected to motion blur. They are also much further away, so would have less motion blur anyway.

Second, the camera may have been moving more towards the end of the exposure time and your camera has a horizontally-traveling focal plane shutter. In a focal plane shutter, different parts of the image are exposed at different times. If the camera was only moved during one part of the exposure, then only the part of the image exposed during that time will have motion blur.

Now that I took a closer look at home at the larger image and was able to look at the meta data. At 1/10 of a second shutter exposure, the shot was open an exceptionally long time, especially for a moving vehicle.

Since you were traveling, you are seeing the arch as it appeared both at the start and end of the shot as you were moving under it. The clouds remain sharp because they are very distant and thus they changed position very little compared to you.

The G remained sharp because you tracked the shot on the G, however the arch changed orientation significantly in that 1/10 of a second and so you get a blurring of the shot. It is far more obvious when you look at the full resolution version and can see the beginning and end of the exposure clearly.

It has nothing to do at all with which direction the shutter moves as 1/10 of a second is far, far below the sync speed. Your D5100 also has a shutter that travels from top to bottom (note that the camera is upside down in the video).

Not the answer you're looking for? Browse other questions tagged troubleshooting blur or ask your own question.

4
Why doesn't the background become blurred when I change the aperture on my Fujifilm S4000?
9
I cannot open the internal flash on my Canon 60D camera; how do I fix it?
13
How can I prevent blurred images when using a tripod?
1
How do I remove the blur in my jewelry picture?
0
Why are my photos taken with the Sigma 18-50mm f/2.8 coming out blurred?
3
Why does my Zorki 4 take blurred pics on infinity focus?
2
Why is there motion blur at the edge of photos?