I'm not quite sure what you're asking, but I'll try and cover all the bases.

Firstly RGB values run from 0 to some arbitrary number depending on the colour depth - how many different colours your image format or editing program can store. A typical colour depth is 8bit per channel. Here the number of red, green and blue values is two to the power of 8, which is 256 so the numbers go from 0 to 255.

Even if you were to convert the 0 to 255 value to a percentage with 0 = 0 and 255 = 100% then the numbers still wouldn't correspond because CMYK is a subtractive colour model whereas RGB is an additive colour model.

CMYK is subtractive because it is used for mixing inks which display different colours by absorbing light whereas RGB is used by monitors which produce light, which gets added together. White in CMYK is produced by the values 0%, 0%, 0%, 0% i.e. don't put any ink down to absorb light. White in RGB is produced by the values 100%, 100%, 100% i.e. output the full amount of all colours of light which mix together to give white light.

CMYK and RGB are thus opposites of each other. So to answer your questions the values aren't equal because of this. But they are directly comparable so you can convert approximately in your head, each C,M,Y, has it's opposite R,G,B, (I'll cover K later)

The reality is however a little more complex as it depends on exactly what shade or RGB and the corresponding inks is used as described by the colour space. Whereas monitors use isolated pixels (not directly influencing each other) printers are in most cases dropping ink onto same point and the mixture of inks will look differently compared to inks dropped separately. Calculations between RGB spaces can be done using 3x3 matrix conversions, conversions from RGB to printer CMYK colour spaces cannot be done with matrix no more.

What about K then?

Again, another practicality, mixing all CMY inks together can yield a dirty dark greenish colour, not black. To combat this printers added another ink: Keyline (black). Now if you want black you just use 100% K. Simple. Not quite, you can make the black a bit darker by added a small amount of magenta, yellow, and a slightly bigger amount of cyan, giving so called rich black. Using more ink makes it darker but risks oversaturating the paper or printing medium. This is not really relevant for Photography, I just included it for completeness. If you're not doing pagesetting work I would just leave the CYMK conversion to the printer who knows about all of this!

Yes and no. It is important to remember that RGB is an additive process, and CYMK is a subtractive process.

First, the yes; there are general mappings that can be done -- so the absence of green light means that you want to print magenta (which will reflect the red and blue portions).

On a slightly more detailed level, you get the "no"; There is more than one RGB colour spcae, common ones include sRGB (which most digital cameras default to use) and Adobe RGB -- there are others, and your monitor may support a different colour gamut to the images captured by your camera; similarly, each printer vendor may use different combinations of inks which gives them a slightly different colour gamut, resulting in a fractionally different conversion between the two colour spaces.

When printing you are photos, I would advise to transfer them in a common format like sRGB or Adobe RGB unless you can get the colour profile for the printer that will be used.

Good explanations of additive versus subtractive color so far, I just wanted to clarify a few points...

First, there isn't a single RGB or CMYK standard, both are device dependent (the colors vary based on what device is displaying/printing them), so already we have trouble.

A typical CMYK color space (a graph of all the possible colors of a given color space) is smaller than (and not 100% a subset of) most RGB color spaces. CMYK is also highly device dependent and the colors it can express can vary greatly depending on the type of printing, quality and finish of the paper, etc.

So when Photoshop converts from RGB to CMYK the colors either are compressed or clipped (kind of like an audio recording) to fit inside the CMYK space. How much compression and clipping vary by the exact CMYK color space used and the settings used in Photoshop.

Also, Photoshop will put amounts of K in a CMYK photograph -- normally to keep black areas looking really black -- but it can also be setup to print gray tones in the photograph as black ink as well (to save on color ink, at the expense of some color accuracy).

All of this means there isn't necessarily a one-to-one relationship between a given CMYK value and an RGB value. You can convert RGB to CMYK, but you won't necessarily get back 100% the same pixels if you take that CMYK data and convert back to RGB.

So, never convert to CMYK unless you know you need to and always keep the RGB version of the file, in case you need to make further edits or change the CMYK conversion settings.

An oldie question but here I go.

A total NO will be my answer.

1) I could be picky on this first point. A RGB value normally can be on a 256 level scale. A CMYK percentage can have "gaps" if you define them directly. Although it has 256 levels internally you have a 100 level scale when you are defining CMYK values.

2) Ok Let us forget that first point. Lets think that you can simply take one color and use it as the complementary color on the other model. This is what I call a direct conversion. No matrix involved or K channel for that matter.

You will notice that you do not get a black color at the center of this example, but a dirty greenish brownish goo. 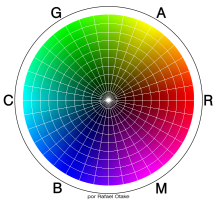 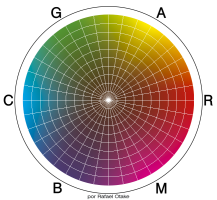 That is why in a CMYK model you have an actual blacK ink.

Including this K ink it is not in an uniform fashion. The K starts to be included in some point of the mixture.

For example the cyan, instead of an uniform grading 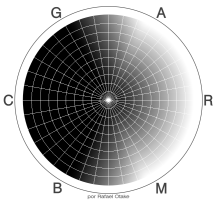 it starts to "leave space" for the black in an irregular way. 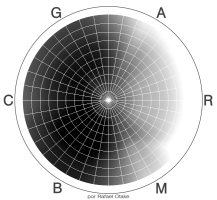 3) There is not a single RGB => CMKY algorithm, there are a lot of them because a CMYK file is a lot more device dependent than an RGB file. That is a color profile.

A CMYK file could not work at all on another paper or print method.

Not the answer you're looking for? Browse other questions tagged color color-spaces rgb cmyk or ask your own question.

5
CMYK vs RGB - Can a DSLR take CMYK images?
10
Is there a lossless sRGB to CMYK conversion?

10
Is there a lossless sRGB to CMYK conversion?
3
RGB to CMYK in Photoshop without ICC?
6
Do photography labs use RGB or CMYK for photo print processing?
1
What is the proper way to convert digital picture from the RGB to CMYK so a print-shop can use that file in a color flyer, or magazine, etc?
5
CMYK vs RGB - Can a DSLR take CMYK images?
5
Is CMYK less blue than sRGB?
0
Why is my RGB to CMYK conversion causing a "dull" print?
2
pdf images are RGB, but printer will be printing using CMYK
2
How did color spaces get their names?
17
Why is CMYK more efficient/beneficial than RGB for performing printing operation on white paper?