What do I need to know for volcano photography?

I'm doing a trip to Sicily in a few weeks, including, if the weather allows, a hike up the Stromboli volcano, which is one of the most active in Europe (it's apparently erupting almost all the time). I've never seen a volcano before, so I don't exactly know what to expect in terms of luminous intensity or fumes for instance.

I'd like to go back home with good pictures, and since it's a particular subject, and a once-in-a-long-time opportunity, I don't want to mess up. I'll be using my Nikon D5100, and will probably have the option to use any of my 85mm, 50mm or 12-24mm.

Here's the kind of picture I'd be glad to add to my collection (rather long exposure, which reinforces the idea I might need an ND filter) : 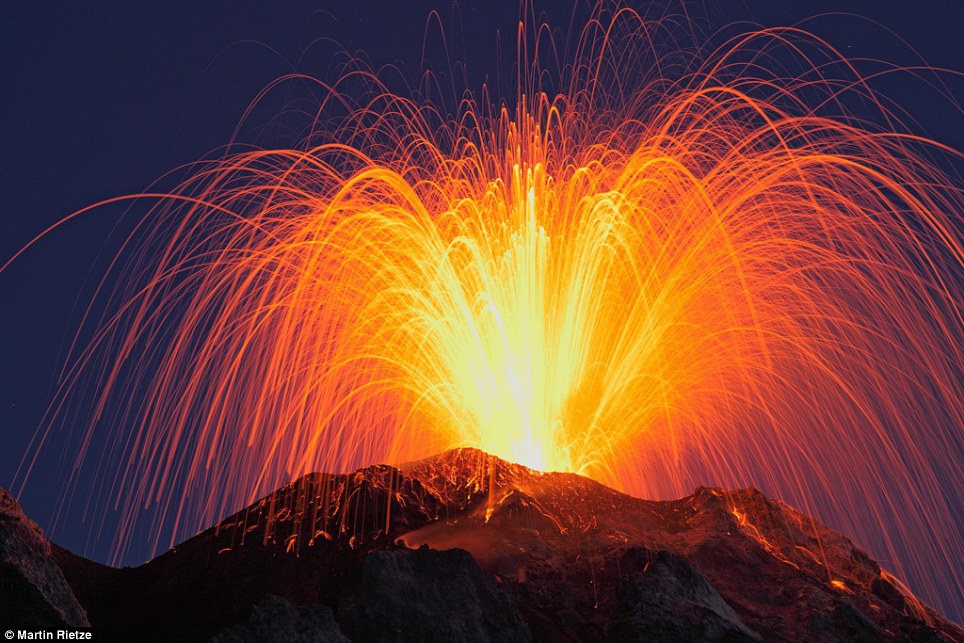 To address your points in order:

The overall luminosity isn't going to be that bright, but you may want to be able to do long exposure which may require an ND filter.

As for fumes, there generally isn't ash in the case of surface eruptions. It is mostly just noxious gas (ie, "clean" air, but air without enough oxygen in it and too many things that aren't good for carbon based life.) Luckily, your camera isn't a carbon based life form needing to breath, so it shouldn't particular care.

You will likely want a longer lens though. You are not going to be able to get close to the lava flows for safety reasons. I would recommend a minimum of a 200mm lens and if you can get a 400mm lens or longer, that's probably preferable. 85mm is most likely not going to cut it from a safe distance.

Lens hood doesn't matter for a light source in frame, but it does matter for light sources out of frame (ie, the sun) so use conventional wisdom about the lens hood. I'd generally use one because it isn't going to hurt anything.

The only other advice is make sure to follow the posted notices and be aware of your surroundings. Volcanoes are fun to visit, but they are also dangerous, especially active ones. The actual volcano generally extends far beyond where you see the lava and the rock above it can be very thin. Additionally, noxious fumes that displace oxygen are all over and you won't feel uncomfortable if you go in to an area with insufficient oxygen, you'll feel fine right up until you pass-out and suffocate.

Not the answer you're looking for? Browse other questions tagged equipment-protection environmental-dangers volcanos or ask your own question.