Is there a way to adjust the aperture of a Nikon lens without a camera or physical aperture ring?

We're using a scientific camera (Imperx Bobcat) which does not have any electronic connections in the mount for the lens. It mounts Nikon lenses, but the mount doesn't have the necessary electronic connections. This has been fine for us in the past, as we have always used lenses with a physical aperture ring. (We manually focus the lens for our experiments, so autofocus isn't a concern.) We recently gained access to a AF-S NIKKOR 200mm f/2G ED VR II lens, but it lacks a physical aperture ring.

Is there some sort of adapter or 'smart' extension tube that would let us adjust the aperture manually on a lens without an aperture ring? (We typically use extension tubes, so the extra distance is not a concern.) The easy answer is likely to just use a lens with an aperture ring, but we wanted to see if there were any possible options for the above scenario.

Ultimately, we decided to use a Nikon BR-6 Auto Diaphragm Ring combined with a BR-2A Lens Reversing Ring, plus a Nikon AR-10 cable release for setting the aperture.

This was admittedly an ugly solution. The BR-6 and BR-2A act like extension tubes (hurting far focus), and you cannot readily set the aperture accurately to a known value (other than wide open or closed). However, for our specific application, these tradeoffs were acceptable. Be advised that in a more conventional photographic setting, these compromises may be far more unpalatable / problematic.

As far as I'm aware, the AF-S NIKKOR 200mm f/2G ED VR II lens has a mechanical aperture control, not electronic. The lever that controls the aperture can be found on the lens' mount. You could manually set the aperture by stuffing something such as the plastic part of a cut in half cotton bud in the aperture lever slot to keep the aperture set to what you want. 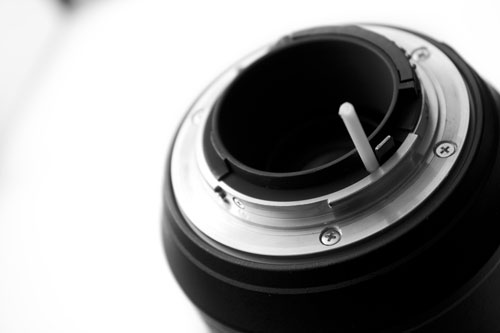 Either way, make sure that the lens release lever (on the reverse of the adapter) is accessible, otherwise you won't be able to remove the adapter from the lens. Alternatively you could remove the lens locking pin from the adapter if you are not worried about the possibility of the lens / camera unscrewing from one another.

That will then give you a Nikon mount extension tube with a lever for controlling the lens' aperture.

you can jam something into the preview lever that sticks out of the back of the lens and get it to open, you would need to take reading to determine the fstop

Fotodiox is selling am "aperture control enabler" now that's designed to do this for macro reversed lenses. You could use it pointing the standard direction on a manual camera body if you got the right filter thread adapters, though it will mess up the flange-focal distance, so it's probably only useful if you're using a macro lens anyway or your image quality requirements aren't too stiff.

This looks like better and cheaper option for NIKON reverse mount lens macro photography option. Where aperture can be changed as simple as moving focus ring.

Not the answer you're looking for? Browse other questions tagged nikon aperture lens-mount lens-adapter extension-tubes or ask your own question.

8
Are the contacts on different extension tubes in Soligor Pentax AF set supposed to be different?
7
How *Auto* Are Pentax Auto Extension Tubes?
8
Is it possible to control aperture when using a mount-adapter?
17
In what way does the lens mount limit the maximum possible aperture of a lens?
3
How does a modern DSLR camera and lens actually adjust its aperture
2
How does a manual lens know when to adjust the aperture?
0
Nikon F - Lens with Built-in Autofocus Motor and Manual Aperture Ring
0
Why doesn't the aperture change when I turn the ring on my Nikon lens?
2
Can the aperture be changed when using a tilt adapter without electronic interface?