Is this photo showing lenses apparently hanging in the air a Photoshopped composite, or was some other trick used?

Is this image showing a photographer surrounded by apparently-floating camera gear Photoshopped, or was a special technique used? 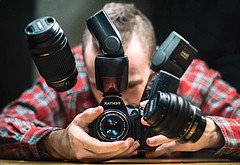 I'm the photographer, who made the picture, and I used Photoshop to make the strings invisible holding the lenses.

This is not a composite. The picture was made from 1 shot. The CE logo on the lens confuses people, because it looks like it's upside down, but actually it's reflected from a mirror.

Photoshop has certainly been used somewhere along the line. Either the 'floating' lenses and flashgun were photographed separately in the same lighting conditions and then composited into the main shot, or the photographer used string or fishing line to suspend them somehow and then Photoshopped it out.

It is photoshopped or gimped or whatever. On the lenses you see color fringes which probably come from working with slightly inaccurate masks on the composing.

The lenses are most likely hanging from black cotton thread. That would be easy to edit out, if it was even visible at all. In particular, the lens on the left is at about the right angle for being suspended by a loop of thread around its top end; the one on the right looks like it would need two strings to support it.

However, having now read Hugo's answer about the CE logo not being mirrored, I now agree that the "floating" lenses were photographed separately and edited in. They may well have been hung from cotton thread to take that photograph: if they were arranged on a table, for example, the photographer would have had to edit out a lot of shadows. Oleg's comment made me realise that rotating a CE logo by 180° has the same effect as reflecting it so we can't tell if the logo is reflected or not.

The easiest way to compose it in photoshop is by photographing the lens and flash on a contrasting background (e.g. bright green) and then use the mirror shot as a background. You can clearly see this is photoshopped because there is no reflection of the lenses in the mirror. There is also a depth error on the flash (it looks like it's behind the guy's hand). Also the text on the lenses is not reverted (you can see a clear CE logo on the left lens). The image is also heavily compressed (look at the low range of colors in the darker areas), compression often helps to hide composition artifacts.

Not the answer you're looking for? Browse other questions tagged technique reverse-engineering special-effects or ask your own question.

0
Can I take photo with visible depth of field if shooting in a mirror?

6
How can I create a photo with vintage look, focused on the lips?
12
How were these Astronomy Photographer of the Year images produced?
26
How does Peter Lik manage to capture the stars in such detail in the following photograph?
3
What does it mean to produce a single photograph using “525 separate exposures”?
3
What kind of special effects can be created using polarizing filters?
1
Can someone shed some light on how the effect in this bar photo was done?
3
Technique for a Trick Photograph(Transparent Hands over the Face)
19
What swirly bokeh technique is this and how can I achieve it?
5
How do I deal with face asymmetry?
0
Man Ray Techniques