Whats the "most amount of moon" acceptable for astrophotography?

The last time I shot the sky, it was a full moon and it completely ruined my shot. What's the maximum amount of moon (i.e. 1/3, 1/2, etc...) that can be out that won't adversely impact a shot of the stars?

For dim deep sky objects the answer is pretty much "none". For brighter objects such as planets the answer is, "It depends." How much an out of frame moon will affect astrophotography shots depends on a variety of factors: Altitude, the amount of water vapor and/or particulates in the atmosphere, the angle between the moon and the center optical axis of the lens, etc...

Can you photograph the milky way with a full moon out? identifies many of the issues with trying to photograph the night sky when the moon is above the horizon.

For milky way images, having the darkest skies possible is key. You want to get a good 40 minutes out from the edge of town in most cases, unless you are already in a fairly small, isolated town. In which case, you might only need to drive 10-15 minutes to get to sufficiently dark skies. Even when you get 40 minutes from larger city centers and sprawling suburban areas, light pollution bubbles on the horizon can affect your images, often significantly.

Assuming you do get out to dark skies, it is still possible to image the milky way with a moon...so long as it is a small phase. A crescent, or even a half moon, is not even remotely as bright as a full moon. (Especially not a supermoon, or as we have tonight, a megamoon (!), which can be even brighter.) The proximity of the moon also plays a role. The farther away in the sky it is, the better. It is usually best to have the moon at least 30 degrees away from whatever you are imaging, however in the case of ultra widefield images like milky way imaging, it is best for any moon to be in the opposite sky. If you are imaging east, then you would want the moon to be as far west as possible. That will minimize LP and color cast from the moon's light.

Another key factor when imaging with a moon in the sky is the established weather phenomena. The more transparent the sky, the better. Even a small amount of thin cloudcover (usually invisible to the naked eye at a dark site) will reflect and disperse moonlight, and can greatly brighten the sky. This will particularly affect blue color channels since higher frequencies of light (bluer) scatter more easily than lower frequencies (redder). Thin high altitude clouds, inversion layers and fog layers can turn a night that might have been viable for imaging into one that isn't even worth bothering with. The supermoon we had in October (the early counterpart to the current triad of supermoons, the middle of which is actually tonight! The largest in 68 years! ;)), resulted in a very significant increase in my signal offset for a Hydrogen-alpha sequence I was working on. Here is an example of a 3nm Ha sub exposure from a new moon: 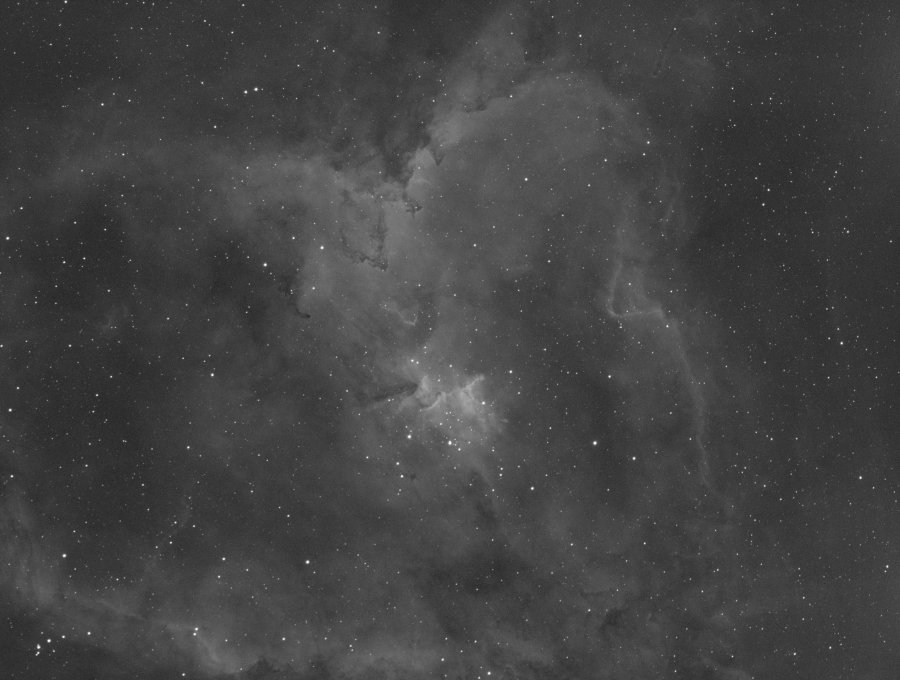 And again a sub exposure from last months supermoon, which was still about 60 degrees away relative to this object (Heart Nebula, Cassiopeia): 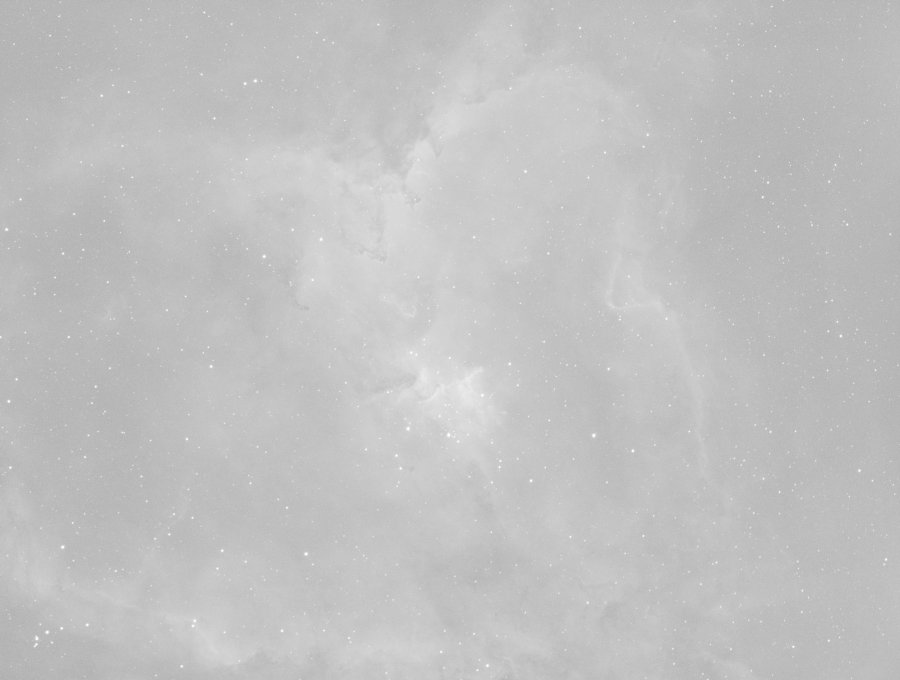 This demonstrates about the most extreme difference you could ever expect. Some kind of high altitude weather phenomena moved in around 1:30 AM or so that night, and persisted until nearly 3 AM. It resulted in the brightest moon I have ever seen by a long shot. The sky that night at 2pm when I went out to check some of my equipment was literally blue...like the pre-dawn twilight. It was so bright for a moment I wondered what the heck was...weird...then I realized I could see, clearly, even into the shadows. I suspect it was even be brighter last month than tonight unless a similar atmospheric phenomena occurs around 11pm tonight. Anyway...this demonstrates worst case scenario with the moon. And in the end, despite the additional light pollution, the data was still actually usable (I just under-weighted it relative to the rest of the data).

I have created several deep sky images with a half moon in the sky. While the moon can introduce a slight color cast that can sometimes be difficult to work out, ultimately it does not affect the quality of the images as much as a full moon: 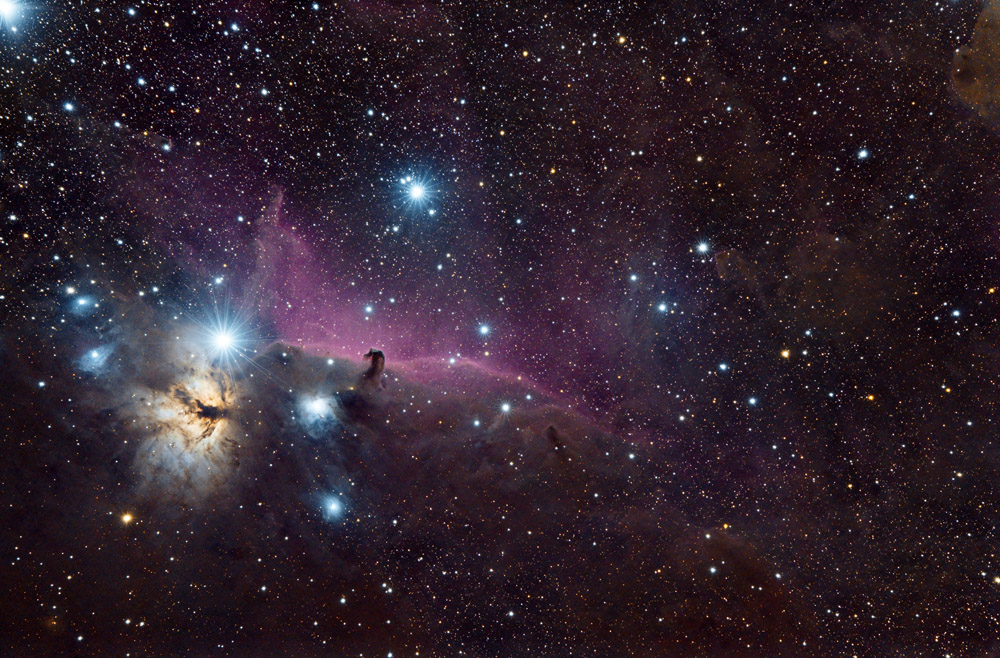 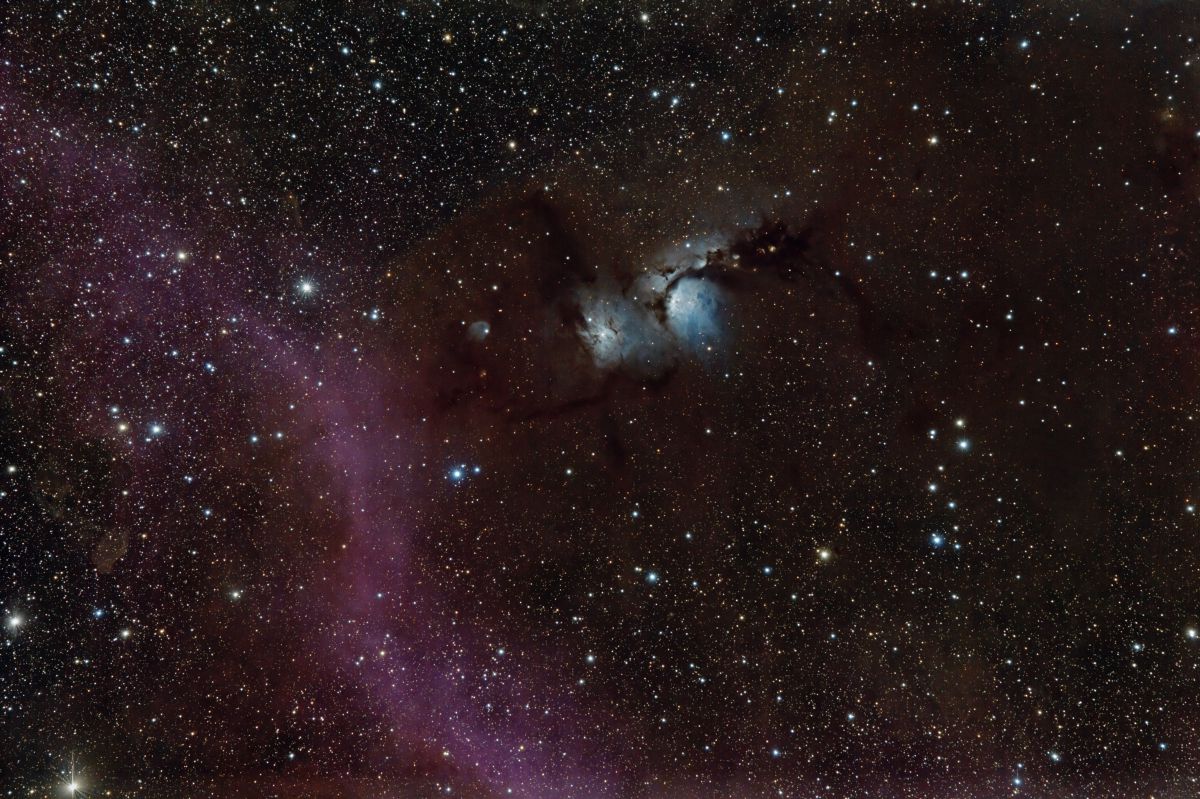 There is a very slight bluer cast to these image due to the presence of a half moon or so, but outside of that you can see that the images were otherwise unaffected.

Not the answer you're looking for? Browse other questions tagged astrophotography night light moon or ask your own question.

19
Can you photograph the milky way with a full moon out?
8
Is astrophotography basically pointless with a moon in the sky?
0
How to set exposure for photographing the milky way?

75
How do I set the proper exposure for nighttime moon photos?
8
Is astrophotography basically pointless with a moon in the sky?
7
How to predict when the moon will appear large?
28
How do I capture the moon and its surrounding context?
3
Does an already set (or not yet risen) moon still wash out stars?
11
How can I achieve more clarity in my photos of the moon?
1
Do I need to wait for new moon to get a Milky Way photograph?
4
RAW Photo of the Moon - How to take pictures of objects in front of a (bright) moon?