Before I found out about Camera Raw, I used to convert my photos from RAW to TIFF, using the XNVIEW convertor, downloaded from the Internet.

My question is whether I lost image quality or anything else. It is obvious that the colors changed, but is this the only problem?

However, after finding out about Camera Raw, I downloaded it, but I didn't notice the ''open image'' button at first. For this reason, I saved the RAW file as a TIFF file and then opened it separately in Photoshop CS6. Did I lose any image quality by doing this?

Just to clarify: Did I lose any image quality, in terms of compression?

The question here really resolves around what you mean by "quality", followed closely by needing to understand what RAW really is and how it relates to other image formats.

On the first TIFF is generally not compressed in a lossy way, so artifacts weren't introduced. By that measure, quality isn't degraded in the same way it might be with JPEG (and especially with re-saving JPEG or by using high JPEG compression levels). So, if detail loss from compression is all you are concerned about, no, there is no loss of that sort.

But, take a look at What is RAW, technically? and Good examples of RAW's advantages over JPEG?. What you loose is flexibility, since the initial conversion "bakes in" decisions about color balance, contrast curves, and demosaicing, and sharpening. Once those are saved into an image format like TIFF, you can make only a more limited range of adjustments, so in that sense, you have lost something.

Depending on the conversion choices you made, this could include loss of shadow or highlight detail, sharpening choices (too much or too little) that you regret later, white balance adjustments, contrast curves, and more.

That said, there are two things to keep in mind before panicking.

First, the range of adjustments you can make and still get excellent results even on JPEG files is still large, and this is particularly true if you're basically in the ballpark anyway. RAW conversion is not a substitute for getting the shot basically right in camera, and so conversely, getting it close to right in camera makes RAW conversion less important. Still, having the RAW files does give you more flexibility, particularly in color balance — the second link I give above demonstrates this nicely.

Second — and this is more of a philosophical point — you don't have to be obsessed with the idea of preserving all of your history in case you might want to go back and redo. You could do that, and it's a perfectly fine choice for some people. However, it's also perfectly valid to leave your finished work as it was, and to concentrate on improving for the future. For this, you might shoot RAW and your conversions, and if you're happy with them, only archive the TIFF or JPEG final output. Some might gasp: "but that's like throwing out the negatives!", which is partially true, but, also, not the end of the world. Only a certain subset of photography enthusiasts care about looking at negatives: everyone else wants to look at the final prints. (Or the digital equivalent.)

@matttdm answered rather about 'image quality' hence I will concentrate on the other part of your question: '(I lose) ...anything else'

Also, I will speak about XnView MP (the enhanced version of XnView) which is due to a new release shortly with big enhancements because is the program which I use heavily from several years now, after I upgraded from XnView.

Apply what I say to XnView - most of them should work, even if something not as powerful as in his newer and enhanced brother, XnView MP.

The main things which you'll lose are:

Also, in the new XnView MP will be an all-new cataloging engine for which these intermediary TIFF files will be just noise. (of course IMHO)

The 'normal' (best) workflow with Raw files is by using XnView's 'Open With...' feature which allows with great flexibility to configure one or more programs to process your selected Raw file(s) - they will be transferred as full raw to the destination program. See the screenshot bellow (taken from XnView MP): 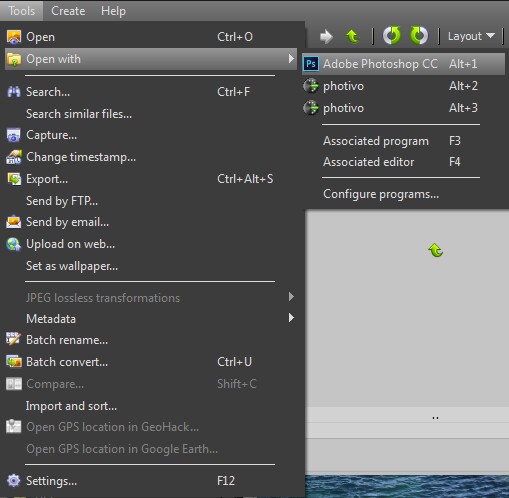 If you saved your TIFFs with 16bit per color channel, you didn't loose any quality. If you saved them with only 8bit, then yes, you lost color resolution, just as with a high quality JPEG. (the TIFF is losslessly compressed, so you don't loose anything by that, but a JPEG with maximum quality isn't noticeably degraded either).

Actually, the image information in RAW files is in TIFF.

To quote from the Wikipedia article on RAW:

Many raw file formats, including IIQ (Phase One), 3FR (Hasselblad), DCR, K25, KDC (Kodak), CR2 (Canon), ERF (Epson), MEF (Mamiya), MOS (Leaf), NEF (Nikon), ORF (Olympus), PEF (Pentax), RW2 (Panasonic) and ARW, SRF, SR2 (Sony), are based on the TIFF file format.[4] These files may deviate from the TIFF standard in a number of ways, including the use of a non-standard file header, the inclusion of additional image tags and the encryption of some of the tagged data.

Essentially, a RAW file is TIFF image data with added (sometimes proprietary) metadata. The ISO TIFF/EP standard is a standard way to add metadata to TIFF, but most manufacturers use EXIF instead for that task.

So, no, saving the file to TIFF--assuming the conversion knows how to unwrap your RAW file headers and metadata from the image data properly, and you're matching the bit depth and don't add lossy compression (which TIFF can do, although rarely), won't affect the image quality--but it will probably lose metadata, such as your white balance setting. If you haven't processed the RAW first, you aren't "baking in" a white balance setting, you're simply losing it.

308
Good examples of RAW's advantages over JPEG?
110
What is RAW, technically?
96
What does an unprocessed RAW file look like?
31
Why do RAW images look worse than JPEGs in editing programs?
1
What metadata does RAW support that TIFF doesn't?

3
What is the real world impact of the lossy compression used for NEF RAW files in some Nikon cameras?
1
Will transfering a TIFF to a photolab via ROES software cause it to lose quality?
2
Lossy but essential: is there a modern file format useful for modern camera files?
1
Why does raw to jpg conversion differ in different editors?
1
Why doesn't PNG show more detail than JPEG in a converted NASA image?
4
Why is my Canon Raw preview a much smaller filesize than high-quality large, despite little difference in image?
3
RAW to TIFF or PSD 16bit loses color depth
2
Why do JPEG and TIFF versions of image look different?
1
What is the usefulness and best conversion software of TIFF file format for scanned slides