What is the largest aperture on a commercially available lens? [duplicate]

Ask Question
Asked 7 years ago
Active 7 years ago
Viewed 23k times
4
This question already has answers here:
What is the fastest lens available for a DSLR? (8 answers)
Closed 7 years ago.

Out of pure curiosity, what is the largest aperture, or lowest f-stop, a commercially available lens has. I have seen the 50mm prime lens from canon with 1.2, but not lower than that. What are the technical problems associated with the size, does it become exponentially more difficult?

And if rental counts, you can rent the Zeiss f/0.7 lens made for NASA and famously used by Stanley Kubrick - but only attached to a specific camera. That's often claimed to be the largest practically usable aperture ever made.

What are the technical problems associated with the size, 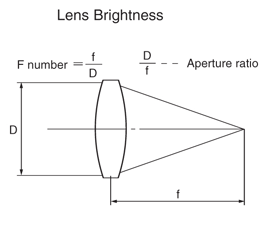 Look at the image and imagine that D increases while f stays the same - it should be clear that the light rays then need to "bend" more. And making optics that refract light rays at large angles without incurring all kinds of distiortions and aberrations is very hard. It requires exotic materials and more lens elements for correction, and of course all of them have to be large because, well, it's all about making that opening larger.

does it become exponentially more difficult?

I don't think the difficulty of lens design can be quantified in a way that would make the expression "exponential" meaningful, but yes, it gets a lot more difficult (which is probably what most people mean when they abuse the term).

Not the answer you're looking for? Browse other questions tagged lens aperture optics f-stop or ask your own question.

11
What is the fastest lens available for a DSLR?
0
What is the smallest f number possible?
1
what is the barriers of making fast lenses?

34
How do you find out the “sweet spot” of a lens?
10
Will a lens with a low aperture value give me better portrait photos?
5
Why do zooms have small apertures even around 50mm?
3
How can I experimentally determine the size of my lens’s aperture?
1
Does shooting landscape at lower f-stop produce reasonably sharp images?